I Believe, I Adore, I Hope, I Love 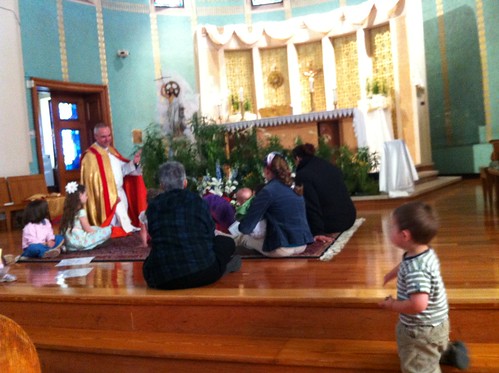 This is what Adoration looks like. A dozen children, four moms, one grandmother, and an excellent priest who believes that children, yes even the youngest children, can get to know Jesus in this wonderful way. I think the oldest child here is 8. The youngest is Lucia, at 3 months, but the next youngest is a little lad who is only one month older. 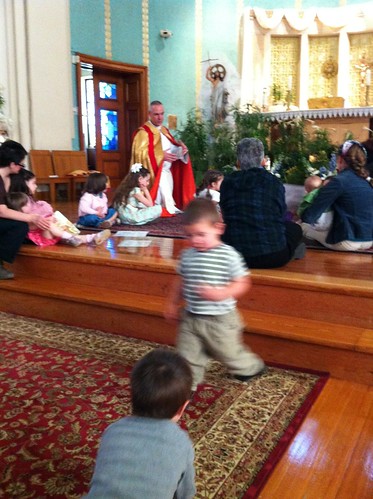 We began with O Salutaris Hostia. The moms sang off of printed sheets, most of the kids just listened. But they were hearing it, soaking it in. Then Father gave a nice little talk to the kids, talking about Jesus, inviting them to listen to Him and to bring Him their thoughts and concerns. A short period of quiet and then the children talked about Jesus, explained what they had prayed about, if they wanted to. I had to take Lucy to the back to nurse her as she got quite fussy at this point.

Then a brief prayer, the prayer the little children were taught by an angel at Fatima:

My God, I believe, I adore, I hope, and I love You. I ask pardon for those who do not believe, do not adore, do not hope, and do not love You. 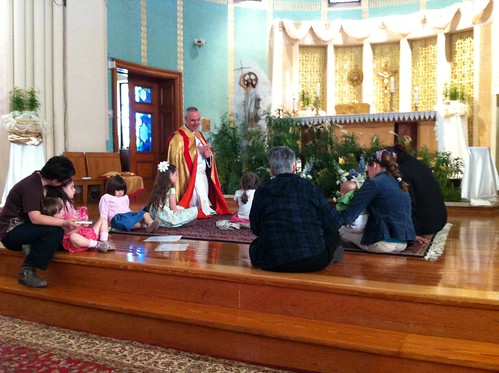 I’d like to note that mine were the only children running around all the other children stayed nicely put on the rug. Anthony and Ben did actually kneel down once or twice, but mostly they were jumping off that bottom step, kicking the pews, and being boys.

Bella and Sophie both did the thing where they lay down on the floor and kick their feet. But then they both did a passable job of kneeling at the end. And at the very end both stood in line sweetly for a special benediction. 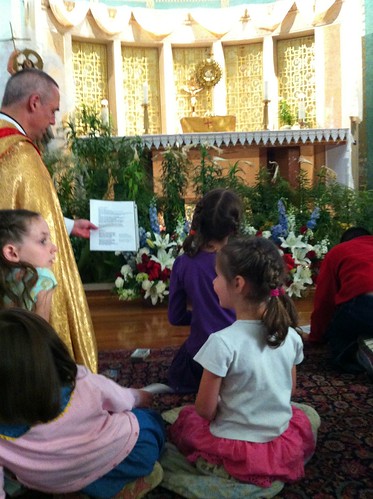 Adoration ended with praying the Divine Praises and singing the Tantum Ergo. There was another song in the middle that I can’t remember. Finally as Father carried the Host back to the tabernacle, we sang Holy God We Praise Thy Name. Sophie’s favorite. I love that the format has room for the beautiful Latin hymns, the sense of the sacred and profound mystery ad ritual, as well as the personal and intimate. No, these kids aren’t quite ready to make a quiet Holy Hour, but they get it. They know they have spent a special time with Jesus. It wasn’t watered down for them but it was made accessible to them. 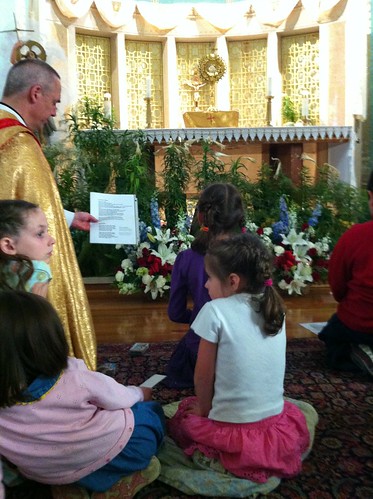 It’s probably been at least six months since the last time we went. This time I was able to see a profound difference in Ben who was especially sweet today. In the past couple of weeks he’s seemed to have turned a corner and has got over whatever it was that he had against religion and has started sometimes kneeling in church and praying along at dinner and bedtime prayers and even making the sign of the cross sometimes and who was heard to say he wanted to go to Mass to see Jesus. At the end of Adoration he declared: I like to come and see Jesus. And he was very excited about the holy card of St Teresa that he received and the pretty flowers and loved making a cross.

We got there half an hour early, I was planning to let them run off some steam at the playground behind the church but the school kids were there and there were just too many of them. My timid children preferred to go right into the church. Where they proceeded to run up and down the aisles while I nursed Lucia. They said hi to their favorite saints and admired the stained glass. 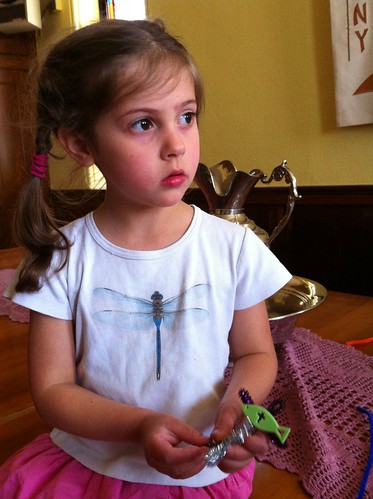 Sophie with her pipe cleaner cross

After Adoration we did a little craft, making pipe cleaner crosses. Perfect fun. Then once the school kids had cleared off the playground, we did go out and run around. And had a picnic lunch on the fly, peanut butter and jelly sandwiches, strawberries, apples, raisins, cheese. Gabriel pushed Bella on the tire swing.

Then when we got home, a mystery. A picture of Blessed Teresa of Calcutta was leaning against the front step. No note or anything. Um. Ok. 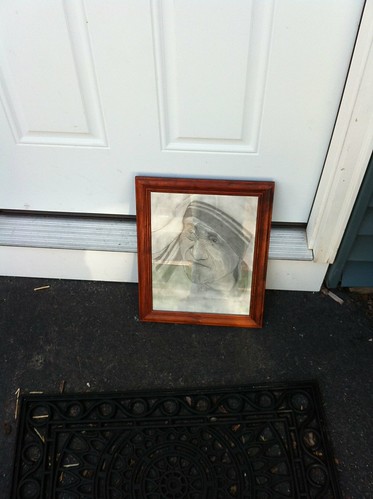 And just for fun, Lucia in her car seat, happy as can be: 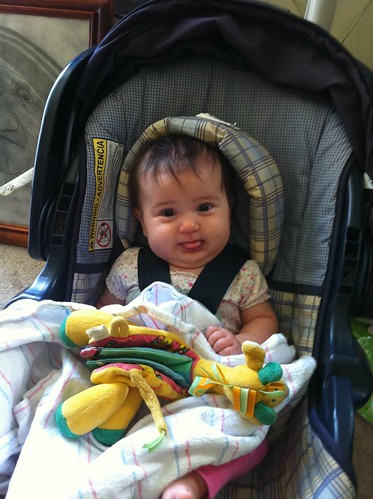 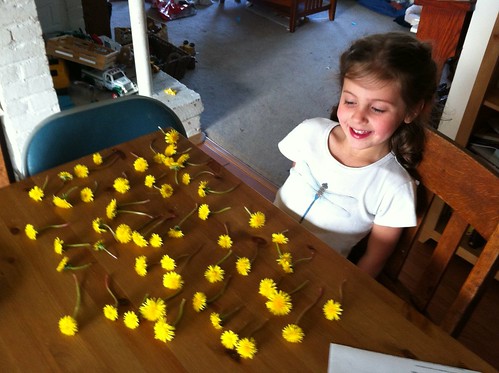 Sophie with a treasure trove, a golden hoard of dandelions. 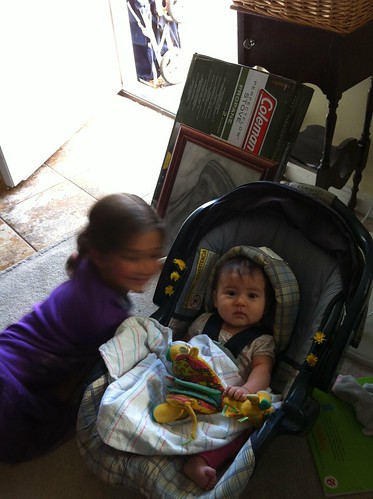 Ben put the dandelions on Lucia’s car seat. He does dote on his little sister.

When Dom took Bella for a walk this morning he said it was delightful to see the world through her eyes. He saw a yard full of weeds, she said, those people are so lucky to have so many flowers. He saw a dilapidated house, she saw that it was painted a beautiful shade of blue. He saw ratty old silk flowers tossed by the wind, she saw a treasure to bring home to her sister and brothers.