Babylonians, Greeks, and Samurai. With a side of Blue and White. 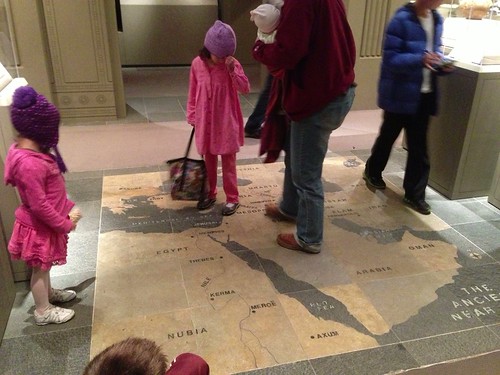 Bella, Sophie and Ben finding familiar locations on a map of the Fertile Crescent and Eastern Mediterranean.

Tuesday Dom took a comp day and we went to the MFA for a field trip. Oh how we love the MFA. 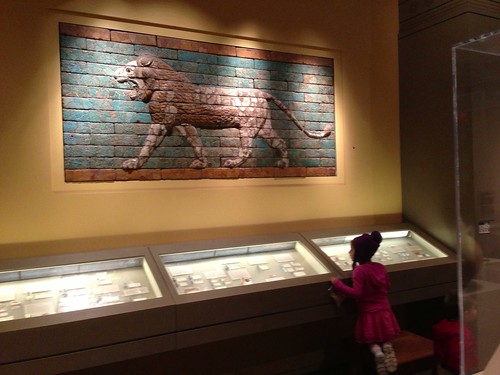 Sophie looks at a variety of seals beneath a Babylonian lion.

We started out with the Mesopotamian rooms. Babylonians, Hittites, Assyrians, Phoenicians. Bella loved it. She asked me a few questions, but mostly marveled. After doing a circuit around the room, she pulled out her notebook and drew a sketch of a cup shaped like a boot and then one of a silver bowl with a ram on it. We looked at the Greek rooms next. She sketched a little golden libation bowl and a silver coin with a head of Hermes. We admired little sculptures of a goose with goslings, a fox scratching his neck with his rear leg, and a woman kneading dough, a woman grating cheese, and a man cooking. She loved the big Hoplite shield and we admired some black and red vases and cups. There was restoration work being done on a couple of Etruscan sarcophagi. Very interesting. She doesn’t want me to talk too much or read all the cards. She likes to just look at the pieces. I try to comply, but I enjoy reading all the details. I didn’t get any pictures of any of the Greek artifacts. Well, maybe next time. 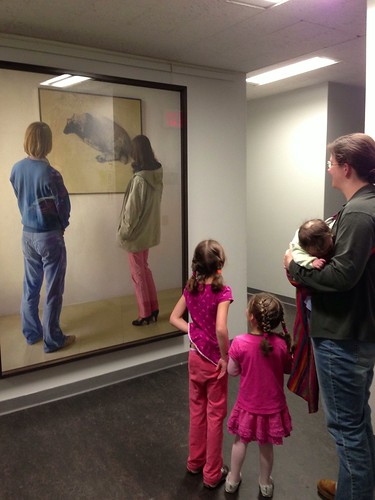 We had lunch in the cafeteria, taking advantage of our member discount. It was yummy, I had an Asian pork roast of some kind with a bunch of dumplings and sauteed vegetables. So good. The boys split a piece of pizza. Sophie had a hamburger. Bella had chicken fingers. 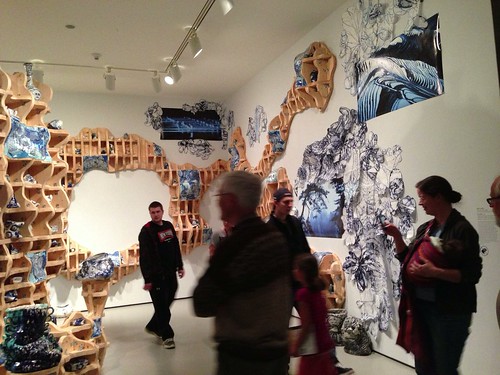 This was an exhibit called Blue and White. I would have loved to linger and look at all the lovely porcelain, but Dom really wanted to get to the samurai and well, porcelain and Anthony didn’t seem to be a winning combination. All these pieces were just right there at his level, waiting to be mauled. 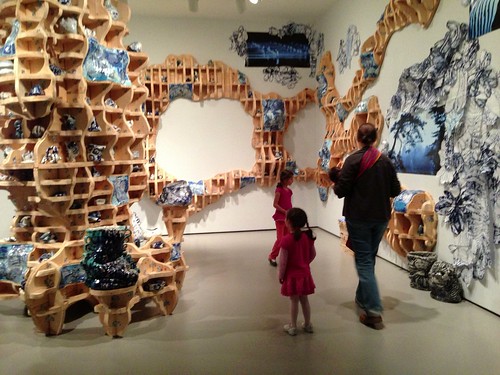 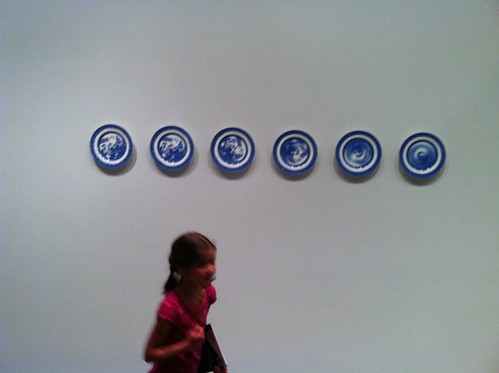 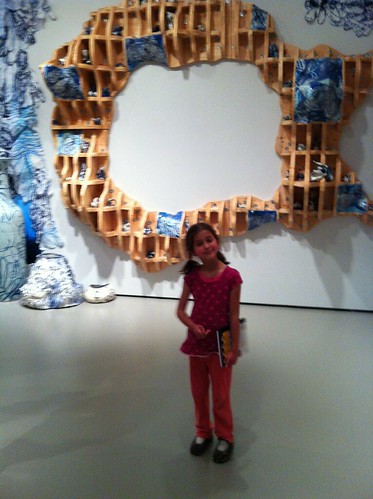 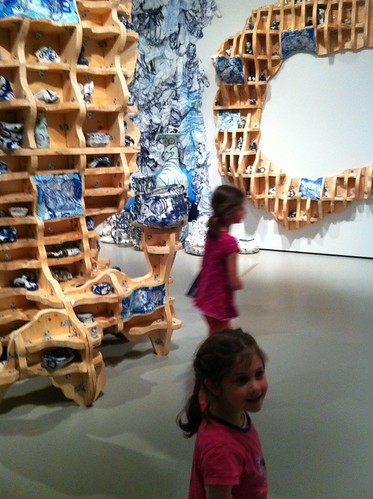 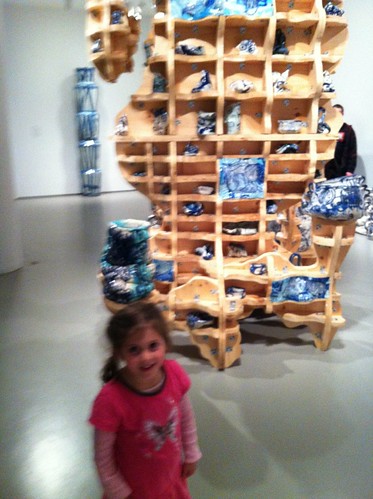 After lunch we went to the samurai exhibit. We lucked out and walked in to a guided tour. I love it when you can listen in and learn all kinds of cool things. Unfortunately, we’d hit the after-lunch crabby hour and couldn’t linger as long as we’d like. Ben, Sophie and Anthony, were all fighting over who got to sit in the double stroller. So we had to high tail it out of there. We bought a bunch of books in the gift shop. The exhibition catalog, Japanese Children’s Favorite Stories 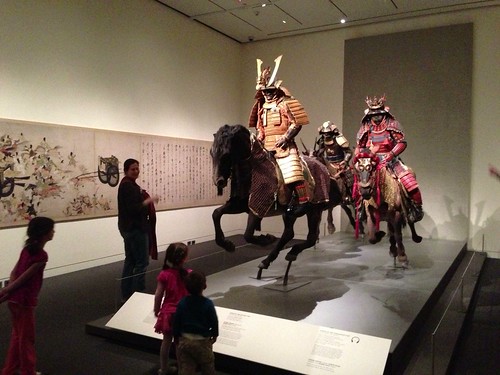 The most impressive part of the samurai exhibit was these horsemen.

All of it was fascinating and cool. The armor, the weaponry, the clothing. I could have lingered a long time and so could Dom. Bella, Sophie and Ben all likes it too until they got too cranky. 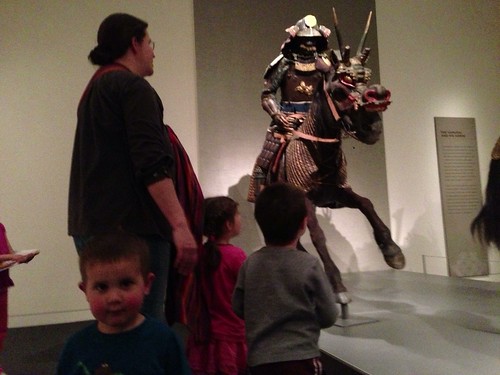 All of it was a bit much of a temptation for an intrepid two year-old with a double ear infection. 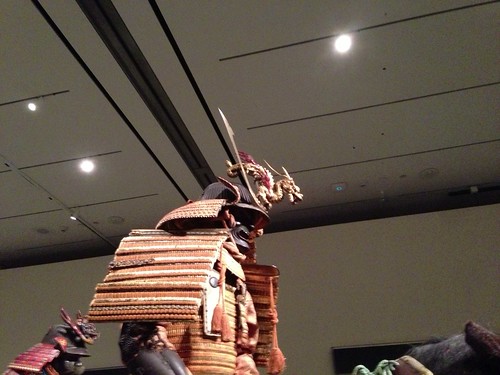 On the way home I read a couple of the Japanese children’s stories aloud to distract the squabbling backseaters. How fun that one of the stories was that of Little Peach, referenced by Rumer Godden in her novel Miss Happiness and Miss Flower.

The paper dolls proved rather flimsy and hard to cut out. But the girls loved them despite having to make me put on their clothes over and over again.

Hopefully next time I can linger longer. But probably not. We do have five kids after all. Lucy did sleep the whole time in the sling. Such an easy baby!