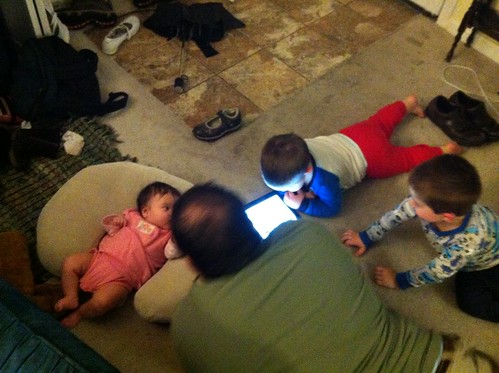 1. Lucy is now three months old and suddenly is learning all sorts of new things. Tonight she figured out how to say “B”. She echoed it back to me after I said, “Boo,” and was so pleased with herself she said it again and again, eventually it became a sort of raspberry with lots of spittle on her lips. Now she’s also playing with her fingers. Very fascinated by her hands. And I’ve noticed her being very deliberate about grabbing at her blankets and at toys that the kids put down next to her. I just love watching her become an active explorer, so aware of her environment and her place in it. 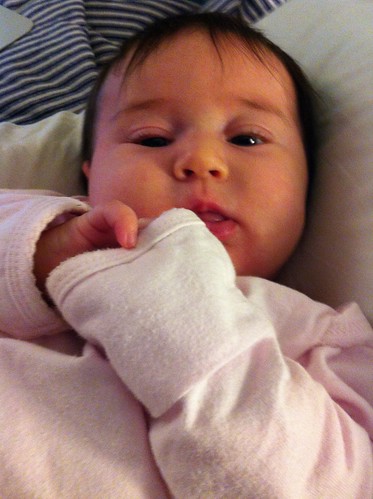 Lucy, still the happiest baby ever.

2. Bella says her favorite book of the Bible is Revelation. I’m not sure why. She loves it in Easter season when Revelation is read in the Office of Readings. And her favorite passage from Revelation is when the Lamb opens the seals. She’s something else. I think she likes the poetry and imagery of it. She also has a very strong attachment to St John. I think maybe because he was at the foot of the cross. She loves to draw the crucifixion with him and Mary Magdalene. So I think there’s a bit of excitement that Revelation was written by him. Such a little fan girl. And she’s not afraid of things that she doesn’t understand but that sound lovely. 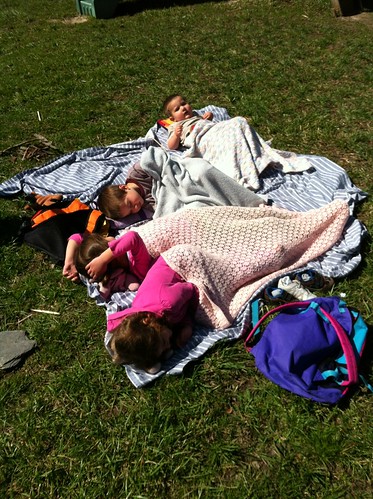 Bella led the other kids on a hiking trip around the yard. I guess they stopped to sleep for the night. Somehow Anthony’s shoes got taken off and put into one of the backpacks and forgotten. The next day he could only find one of them. Took another day before Bella remembered she’d put it in the backpack.

3. Anthony is talking in sentences. “I ate-it chokit, Mama,” he told me one morning recently. And I thought he was reminiscing about his Easter candy. Then I went into my room and discovered he’d eaten half a Ritter Sport espresso and dark chocolate candy bar that I’d bought for myself and was savoring. Grrr. He found my stash and keeps going back. When he found there was no chocolate in the drawer, he emptied the trash bin looking through the empty wrappers. 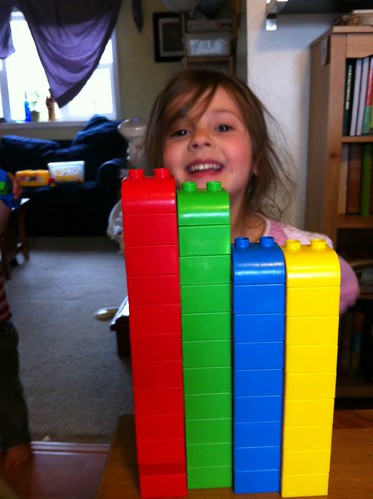 4. Ben has started replacing proper nouns with pronouns and pronouns with modifying phrases. It’s a strange thing that’s just started this week. At first I thought it was just when he was upset with someone—as when a sibling has hit him—he won’t say their name. “That person hit me,” he says. Or, “Someone pushed me.” Trying to get a name out of him is like pulling teeth. But then his aversion to naming names continued in other contexts. He woke up one morning very upset because Anthony had already got up and left their room. He came crying to me and said, “The one who has the mattress before me left and I was all alone.” (This in reference to the fact that Ben just got a new mattress like Anthony’s futon.) Another instance of Ben’s refusal to use names: “I’m not talking to you! I’m talking to that person.” In this instance “you” is me and “that person” is Sophie. I asked, “That person doesn’t have a name?” He answered, “No!”

My working theory is that he’s figuring out definite and indefinite pronouns. But it sure does seem like he’s got an odd aversion to proper names. Today he was trying to tell me who had done something and he kept saying, “her” but I couldn’t tell if he meant Sophie or Bella. He would not name Sophie’s name when I asked, “What is her name? Was it Sophie or Bella?” but kept trying to find work arounds, pointing to the living room. Finally Sophie chimed in, clarifying the matter. But he preferred to keep me in the dark rather than use her name when I asked. 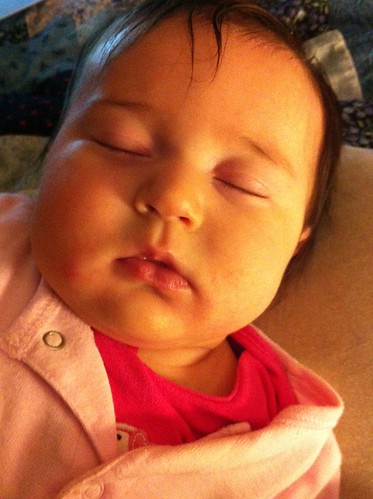 5. About that new bed. We got it at Ikea on April 6 and Ben has slept through the night every night since we got the new bed. The only exception was the one night he fell asleep in my lap on the couch while I was reading his bedtime story. I think falling asleep in a different place meant he woke up disoriented. But even that night I was able to tuck him back into his bed. He didn’t insist on moving to the couch or to my bed. And mind you he even caught a cold, the cold that had Anthony and Sophie sleeping on the couch and recliner, and still stayed in bed all night. This is major. 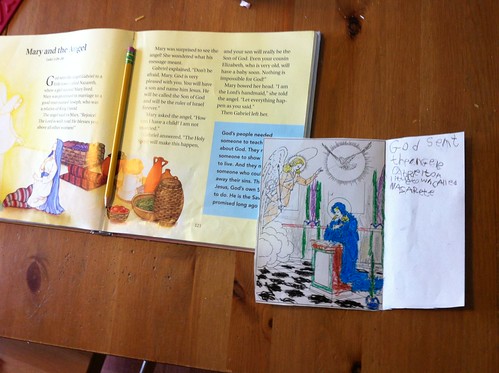 For the Feast of the Annunciation I printed off some coloring pages for the kids. Bella labored over hers, making the colors just so, doing a checkerboard floor just like the one in Vermeer’s The Lacemaker, she told me. Then she fetched her Bible Story book, found the story, and began to copy the text onto her page. She worked on it on and off all day and was still at it at bedtime, sitting up in bed, carefully copying out words. It was forgotten the next day, but still, quite a project. I can’t assign copywork, but when she decides she wants to do it, watch out. 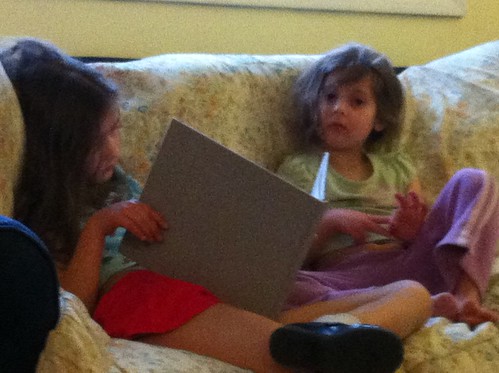 7. Bella made a picture frame today, gluing on fabric flowers and bits of colored paper. Then in the frame she drew a picture of the crucifixion. Then she looked at her handiwork and declared that it was too pretty to keep and began wondering who she should give it to. I told her to pray about it and later she came back and announced that she wanted to give it to her cousin who is making his first communion. She wanted me to write out “Son, behold your mother” and “mother, behold your son” because those are her favorite lines and she drew Mary and John at the foot of the cross. But I don’t think she had room to write them. 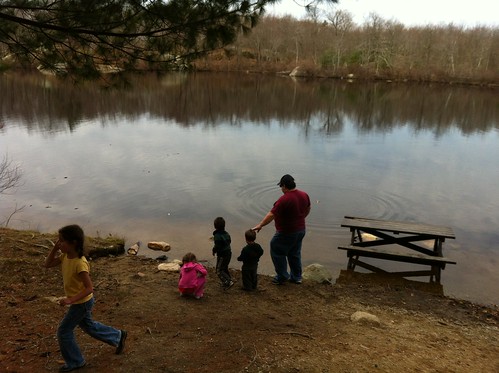 Monday Dom had off so we went to a nearby park. 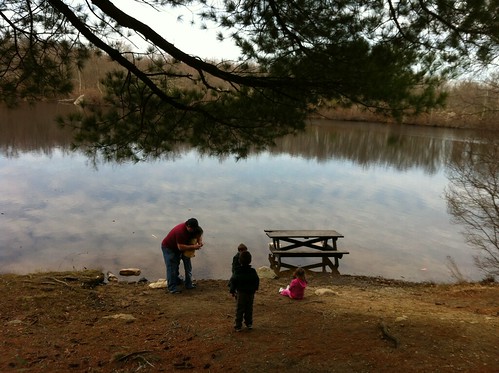 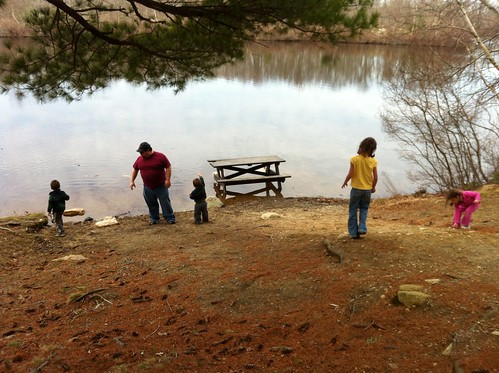 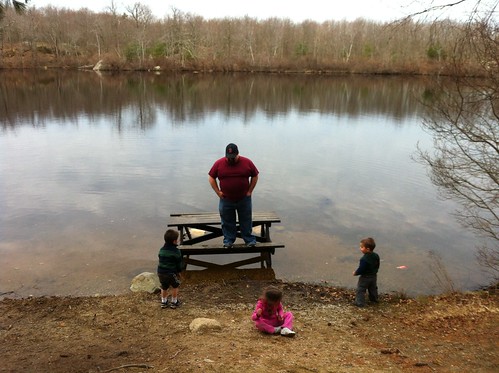 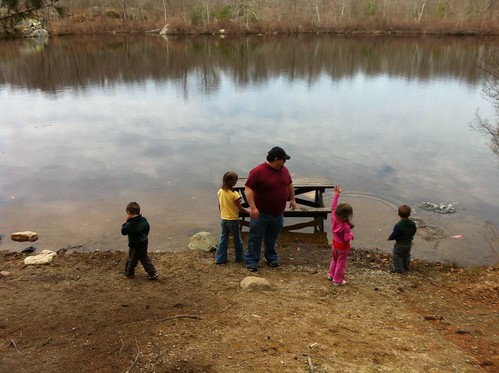 Any place you find rocks and water and kids, the kids will be throwing the rocks into the water. 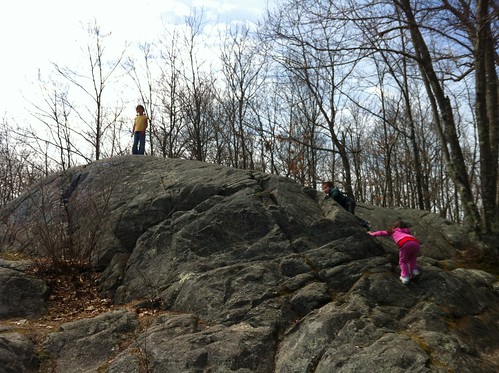 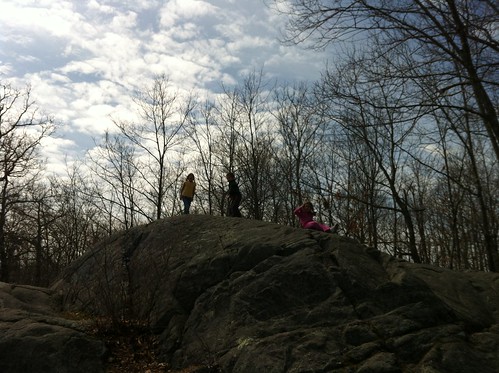 I wish I could get them out to this park more, but I can’t feel very safe taking those kids near water by myself when I’ve got Lucy with me. I’m too outnumbered. And I either have Lucy in the sling, which makes for reduced mobility, or in the stroller where she won’t be as secure and I’d still have to leave her if one of the boys ran off and refused to come back. No, for now I need another adult. Which makes me kind of sad because I want to get out and about more often. I just don’t trust the boys yet.

The quick takes link up is being hosted at Camp Patton today. But the good news is that Jennifer and baby Joseph are now both home!!!