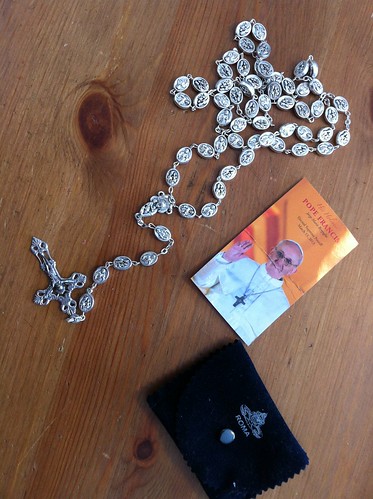 Dom didn’t get to go to Rome with his colleagues for the conclave. But they brought back some rosaries blessed by the new Pope. So I got one. Isn’t that cool? Now if only Anthony didn’t keep running off with it… it’s sure to be broken.

Cleaning up my drafts. This is a linky blog post I put together a week or two ago and never published.

NCR: Do you feel like you’ve lost a brother?

To tell the truth, it’s more like I’ve gained millions of new brothers and sisters, and I’m trying to figure out how to share my brother with all these new members of the family.

When I saw him come out on the balcony, he seemed like the same person I had always known, the same Jorge. Of course, I didn’t have a lot of time to think about it, because as soon as his name was announced our house became a loony bin, with everyone calling us and chaos all around. When I finally had a chance to think about it, to watch him some more, I got the impression that he seems very happy, and it made me think that the Holy Spirit must be right there with him. He seems happy, whole. He was close to the people here in Argentina, but today he seems even closer and more able to express his feelings, which I suppose is the Holy Spirit helping him. I must say I’ve been very happy to see how well my brother seems to be adjusting to his new role.

You know, I heard people talking about how the new pope would be taken to the “Room of Tears” after his election, and I always thought that was sort of ridiculous. What’s the pope got to cry about? But when I realized it was my brother, it seemed obvious to me why he needs that room. There’s a whole square full of people screaming Viva il Papa! before they even know who it is. You’d have to have a heart of stone not to cry a little bit before you step out to face all those crazy people screaming for you.

Some fun facts from a series of interviews granted while he was archbishop of Buenos Aires. The interviews are in the book, “Pope Francis: Conversations with Jorge Bergoglio” by Sergio Rubin and Francesca Ambrogetti, which was originally published in 2010 under the title “El Jesuita” (“The Jesuit”). It is not yet available in English.

” Typical reaction to unexpected announcements: He freezes. When Pope Francis was elected pope and appeared at the central balcony, many noticed he looked rather stiff. Turns out that’s how he reacted when he was named auxiliary bishop in 1992 and how he reacts “to anything unexpected, good or bad, it’s like I’m paralyzed,” he said.”

Favorite movie: “Babette’s Feast” because it shows the transformation of a group of people who took denial too far and didn’t know what happiness was, he said. The sumptuous meal helps free them from their fear of love, he said. He also likes Italian neorealism films, which often confronted the social, economic and moral consequence of World War II, but added that as archbishop he didn’t have much time to go to the movies.

—Favorite painting: “The White Crucifixion” by Marc Chagall. The scene “isn’t cruel, rather it’s full of hope. It shows pain full of serenity. I think it’s one of the most beautiful things Chagall ever painted.”

3. Judging by Loving. Bearing highlights this beautiful passage from one of Pope Francis’s homilies.

The Cross is the word through which God has responded to evil in the world. Sometimes it may seem as though God does not react to evil, as if he is silent. And yet, God has spoken, he has replied, and his answer is the Cross of Christ: a word which is love, mercy, forgiveness.

It is also reveals a judgment, namely that God, in judging us, loves us.

Let us remember this: God judges us by loving us.

If I embrace his love then I am saved,

if I refuse it, then I am condemned, not by him, but my own self,

he only loves and saves.