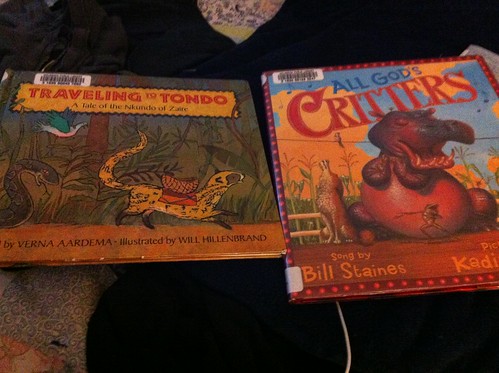 Anthony hit the jackpot this week with fun read alouds at the library. I generally let him pull two books off the shelf to check out. Sometimes they go back in the bag and stay there after a first reading. But these are so fun to read I grabbed them for his naptime today.

The first is a fun tale from Zaire. (Which I guess isn’t Zaire anymore but is now the Democratic Republic of the Congo.) It’s a fun little story about a civet cat named Bowane who is going to collect his bride in the village of Tondo, but along the way is too accommodating to the friends he asks to be his attendants and thus misses the girl. She gets tired of waiting for him (they wait years and years for a log to rot so Ulu the tortoise can get across it.) and marries a different cat. The scorn with which she chases Bowane away is delicious.

The story reads like an oral tale written down with all the repetition and funny animal sounds. It’s a book that has all four of my big kids giggling as I read—and sometimes Lucia catches the mood and giggles too.

What’s really fun about it is that each of the animals make a sound:

(Don’t worry, there’s a pronunciation guide for all the Lonkundo words.)

It’s such a charming little tale with gorgeous pictures that really capture the personalities of the animals and it has a clever moral too. I’d definitely consider adding it to our library.

Anthony’s second pick is an illustration of a song that Bella used to be quite obsessed with. I first heard it back in my Irish pub haunting days in college when Celine and Marianne introduced me to Tommy Makem and the Clancy Brothers:

All God’s critters got a place in the choir
Some sing low, some sing higher
Some sing out loud on the telephone wire
And some just clap their hands, or paws
Or anything they got.

Listen to the bass, it’s the one on the bottom
Where the bullfrog croaks and the hippopotamus
Moans and groans with a big to-do
The old cow just goes MOOOOO

Bella used to watch the Makem and Clancy video on You Tube over and over again. I think Dom even figured out how to download it and put it on an endless loop on my laptop. I didn’t realize what book Anthony had got till we got it home. It wouldn’t have caught my eye, being a bit too garish, but it’s just the thing that a two year old boy would grab. This book has such fun illustrations, big, bold, bright animals all hamming it up on a stage. It’s definitely a big hit with my whole crew. Now Bella and Sophie and Ben are wandering about the house singing along. And of course we’ve been watching the video again too: