I thought I published this two weeks ago and somehow it didn’t post. And it was already two weeks old on March 25. Oh well. I guess most of these aren’t really dated. 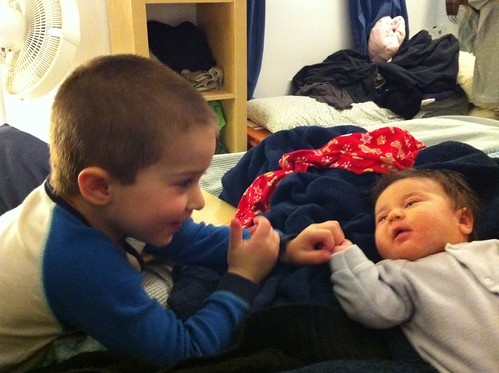 Ben really does adore his baby sister. She thinks the world of him too. 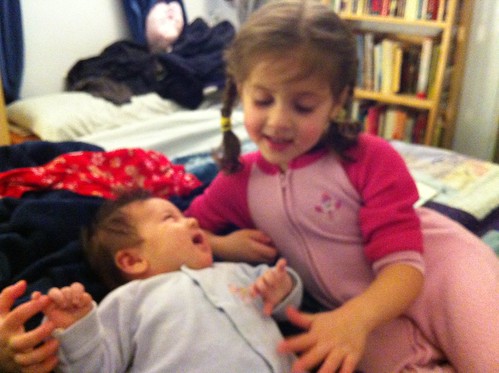 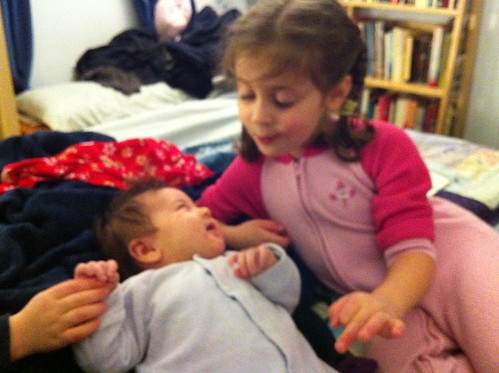 Sophie and Ben have been playing doctor. She sticks a dolly in her shirt and he had to “get something pokey” to get the baby out. Sophie did the best imitation of a newborn cry ever. I thought for a moment Lucia had woken up but was somehow crying like she did in her first few days.

They are both rather fascinated about the process of birth. Ben asked me why he couldn’t go to the hospital with me (for the birth). I said he was there but he said not “for the cutting”. Then he speculated that he wouldn’t want to see that, “just Daddy”. I explained that even Daddy didn’t want to see that so he said “Daddy just looked at the wall.” I don’t recall specifically talking to him about the c-section, but I guess he’s picked things up from his sisters or overhearing us talking. He’s a sharp kid though his recent phase of baby talk has rather masked his true linguistic ability.

Anthony has begun drawing quite a bit of late. On paper. (He also still does a lot of writing on the wall, though I’ve also caught Ben doing it several times so who knows when it’s really Anthony.)

So when Anthony’s drawing he makes a blob and says, “Mommy! Mommy! Look! House.”
I say, “House?” and he says, “Yeah.”
It’s the cutest thing. He also draws blobs that he says are buses, babies, cars, etc.

I read the girls a chapter about St Therese one morning and later I overheard Bella bragging to Sophie about a sacrifice she just made. (I found out later that the sacrifice was wearing a wet sock all day.) I had to giggle as I heard them talking in the other room. Somehow I think she missed the point of that morning’s Gospel about the Pharisee and tax collector when I read it to her. But then again, I think it’s ok for a six year old to be a bit proud of making sacrifices. We’ll work on humility once we’ve got the concept of sacrifice down.

In the last year or two I’ve almost stopped having long phone calls with my family. (With anyone, really, since the only people I have long phone calls with are my family.) I really miss the connection with my parents and my sister, but I just don’t see how I can manage. I’ve been thinking it’s all because of how many kids I have and how little free time I get. When I do get a quiet moment the last thing I usually want is to make a phone call. My introvert self just wants to crawl into a corner and hide. But my sister often calls for a video chat when she’s getting ready for work and on her lunch break and if the kids don’t snatch the phone I often do chat with her for a bit. We also have frequent text chats. And then when I saw the white smoke I felt a need to talk to some other adult and Dom was much too busy doing his job so I called my dad. And after a while I just got so frustrated that I could only hear half of what he said. It occurred to me that maybe one of the reasons I’d stopped calling my family when I have a small space of calm is because I get so frustrated with poor cell phone connections. I hate to admit it because I love my iPhone but it makes a much better pocket computer than it does a phone. The speaker never seems to be quite loud enough and the signal is often poor. Now I wonder, if I had a better phone would I call home more? Probably not, but it’s an interesting question.