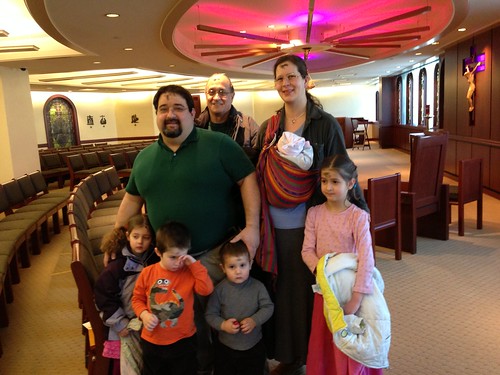 After Mass on Ash Wednesday at the Pastoral Center. The first photo I’ve got with all seven of us together. Plus my dad. Sophie didn’t get ashes somehow.

A bunch of quick takes that haven’t previously appeared on Facebook. I didn’t give it up completely for Lent but did constrain myself from being on Facebook during the hours the kids are awake. And I’m trying in general to be on the computer less during the day. But by the time the kids are in bed I often haven’t even cared to try to catch up on Facebook so maybe I might as well have given it up. Except I do need to use it to communicate with people so being off altogether isn’t a great option.

1. For Lent Bella has decided to give up playing dress up except for dressing up as saints and holy people.

Sophie has given up playing Miss Jelsie.

2. Sophie’s new favorite game is playing King Khufu. In Ancient Egypt. With a mermaid. She lies in her bed with her arms crossed over her chest. And then pretends to wake up. There’s a bunch of other stuff but that’s all that I’ve caught so far. So far Bella’s reading in The Story of the World is greatly enriching their fantasy lives. Bella sees that book mainly as a gold mine for pretend games.

3. When I tell Ben he needs to stop playing his game (for example because it’s time for dinner or because we need to get in the car to go somewhere) he always protests, “It’s not a game!” Evidently it’s a video. Can’t I tell the difference? So I’m supposed to tell him he needs to pause the video. Or he falls on the floor writhing and wailing. Ugh. I can’t wait for him to turn four.

4. Ben outgrew his sneakers around Christmastime and started exclusively wearing his rainboots everywhere. This week we finally got around to getting him new sneakers. All of the ones he tried on he said hurt his heels but I think that’s just because he isn’t used to shoes that actually touch his heels. So I got him sneakers with flashing lights because I figured he might actually wear them that way. I usually avoid light up shoes like the plague but I do understand why parents buy them. They make the battle over shoes a little easier. Anyway, Anthony has also outgrown his sneakers and though the shoes he outgrew were two sizes bigger than Ben’s I thought I’d try Anthony in Ben’s old shoes. They fit.

5. Also today I weighed Anthony on our bathroom scale and it told me he’s now about forty pounds. Eek. He turns two on Wednesday.

6. I just realized today I hadn’t cut my toenails in months. Late pregnancy and then c-section will do that I guess. They were longer than my fingernails. I hope that doesn’t gross you out. 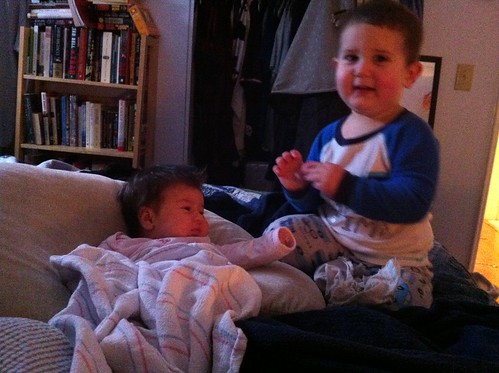 Anthony tells me how much he loves his baby sister.