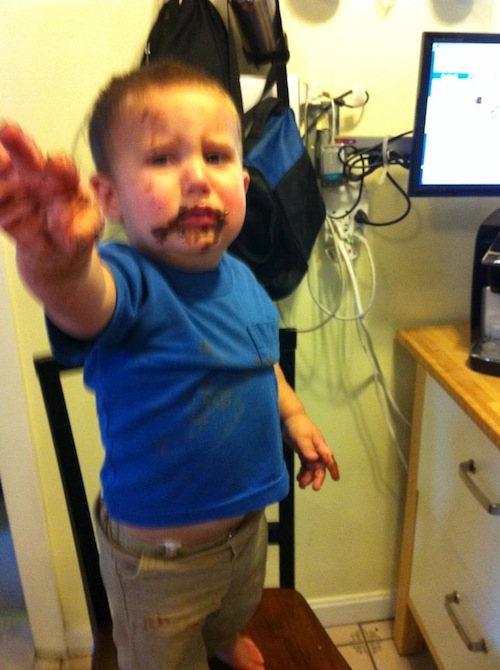 I went to the bedroom to make a phone call and when I was done I sat there on the bed for a while. Soon Anthony came down the hall, crying pitifully. When he reached the door he was in the shadows and all I could see was that his face was covered in something dark. My heart leaped. Was it blood?

No it was Nutella. I’d been having a snack, spreading it on some of the kids’ leftover toast crusts. (What? You don’t eat leftover crusts with Nutella?) I know I closed the jar, so he must have figured out how to open it.

I suppose I was lucky that after eating a bunch he was so distressed over the mess on his hands that he came to find me. He could have just gone and wiped it on the couch. Or the walls. Or his bed.

Tonight as I was cooking dinner Sophie pointed out the gorgeous sunset. Upon seeing it, Bella ran for her sketchbook, “I’m going to save the sunset!” she called, “so I can show Daddy what it looked like when he gets home.” 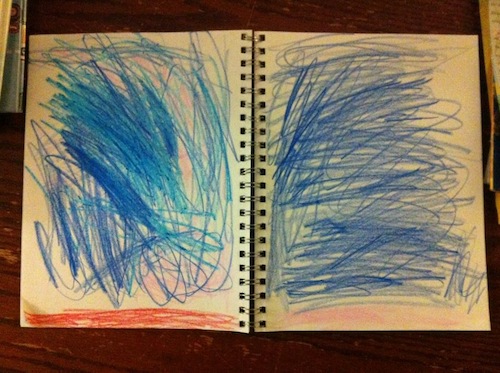 Two views of sunset by Bella. You can tell she’s influenced by the Impressionists because according to Bella the one on the left with the red is how it first looked and the other with the pink is how it looked later.

I love that Ben’s bed is decorated with pictures that Bella has drawn for him. It is just about the sweetest thing ever. 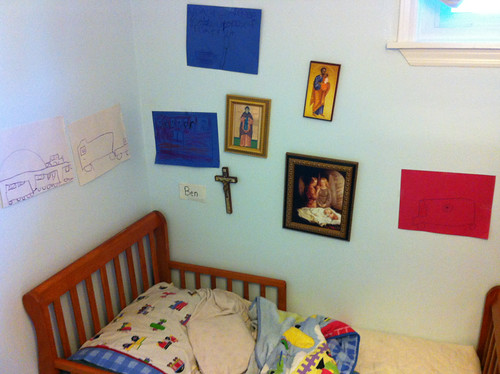 She drew these on two different occasions when he was having a hard time but I had to do something else and couldn’t comfort or distract him. She stepped up and entertained him by drawing him pictures. 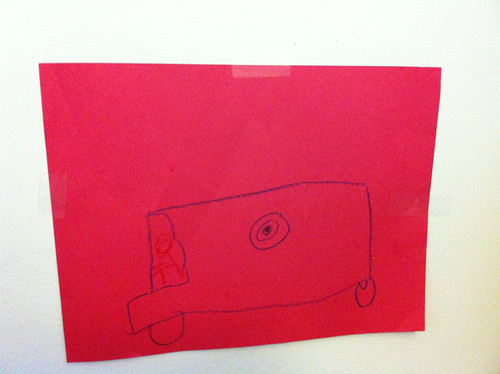 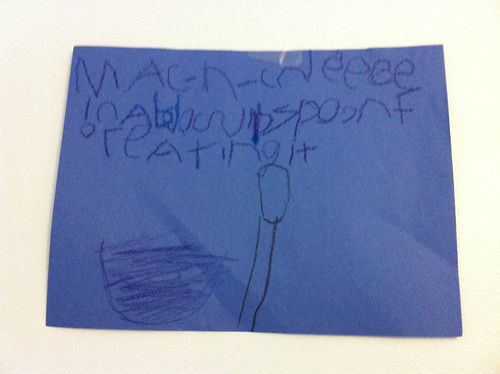 She had me write out the title for her on a separate piece of paper and then copied it all by herself: “Mac-n-cheese in a bowl with a spoon for eating it” 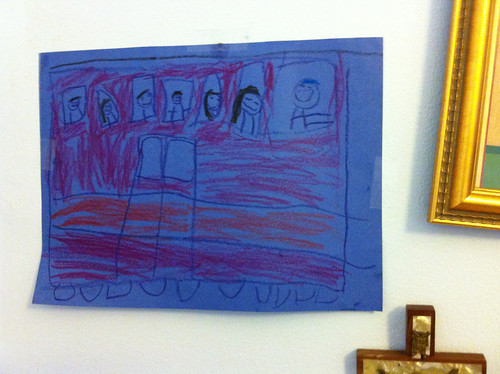 Train” The back of this one has another train on it, but I didn’t get a picture of it. 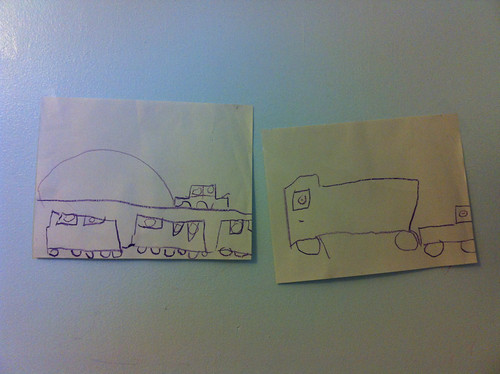 Two pictures of trucks and trains.

Sophie tells a story. With cameos by Anthony and Ben. 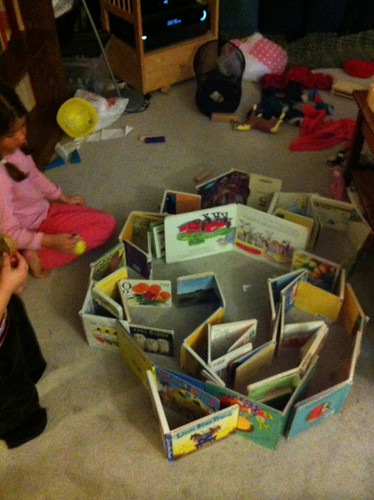 I think this was a house. Made of board books.

This is why my house is never clean. Who could bear to interrupt such a construction project? 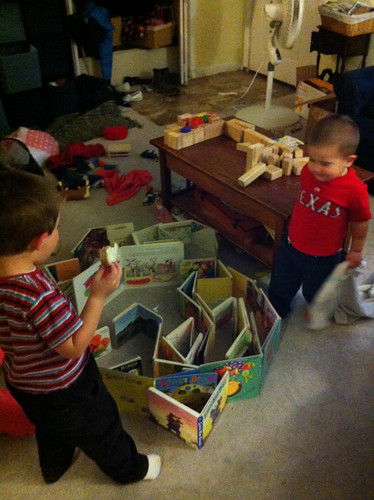 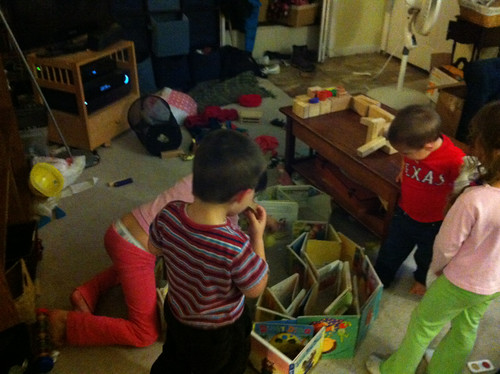 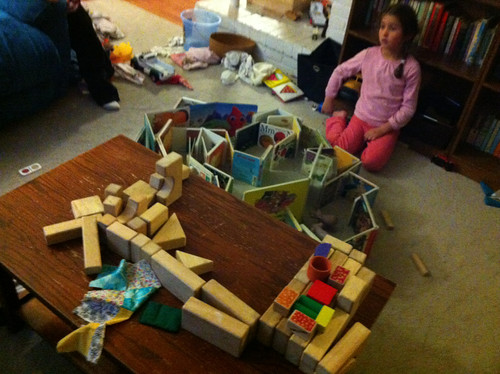 The other night as I was sitting on the boy’s floor after helping them into their pajamas Ben settled down next to me and reached out to put his hand on my belly. He’s been doing that a lot lately. He gently pats it, rubs softly. Then he says he can feel Lucy kick where he rests his hand. She has been kicking, but on the other side of my belly.

He wants to know if she’ll be destructive like Nini. 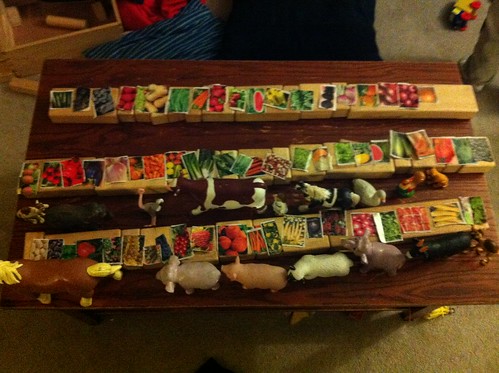 The fruits and vegetables on the block counters are cut out of seed catalogs. 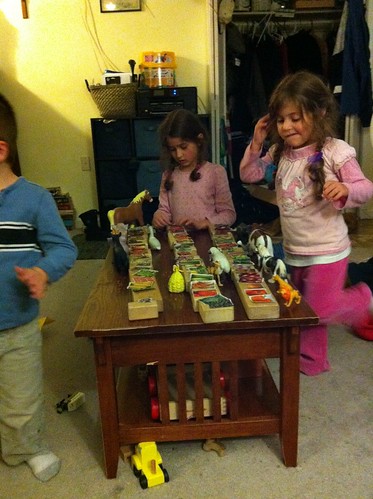 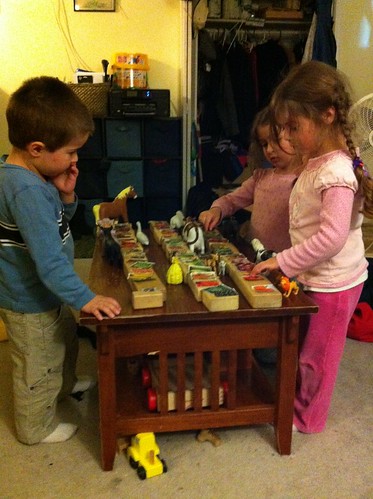 More and more often the big three are playing together. It is so sweet when they do all get along.