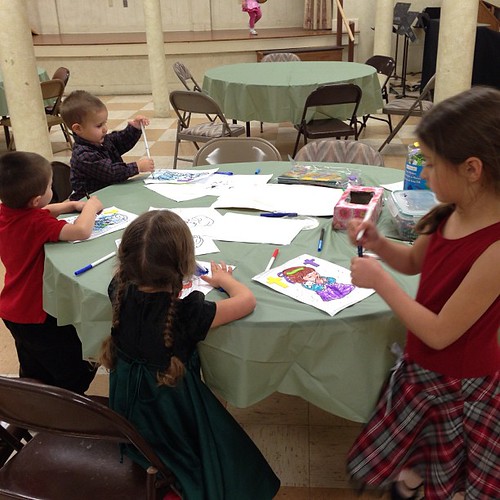 I just loved this moment captured after Mass on Sunday when all four kids, having been satisfied with donuts, sat down to work on coloring pages. One lovely mom sets up a coloring station for them on Sundays when they have coffee and donuts and I so appreciate it. In this picture the personalities of all four of them come out so clearly to me. Bella is a bit of a blur because she’s running back and forth getting markers and stickers. She’s very carefully colored her picture with naturalistic colors and decorated it with stickers. Sophie is very diligently coloring inside the lines and her colors are mostly right, flesh tones for the face and hands and a nice red dress. The hair is blue, though. She sits much more calmly, none of Bella’s fidgets. Ben is happily scribbling all over his picture, content to have something to color. He’s put a couple of stickers on, one he moved when he changed his mind about placement, leaving a bit rip in the paper; but he doesn’t notice such details. Meanwhile, Anthony has somehow joined two markers into a mega marker and is coloring on his hand. 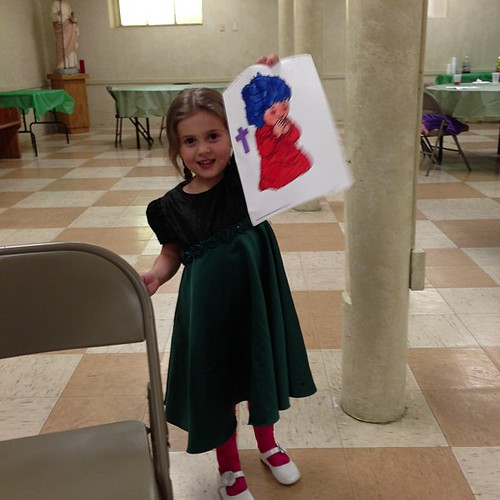 When Sophie and Bella are dissatisfied with their handwriting they say the letters are “woggley.” I think it’s a brilliant word, a sort of combination of wiggly and wobbly. And it reminds me of Pooh who says that his spelling wobbles.

Fortunately they are both getting better at not breaking down into tears every time their letters get woggley. Sophie especially has this perfectionist streak and just melts down when she can’t get something done to her own satisfaction. All I can say is that the apples don’t fall far from the tree. I may be satisfied with my handwriting but in other areas I too get easily upset when I fall short of my own self-imposed standards of performance. 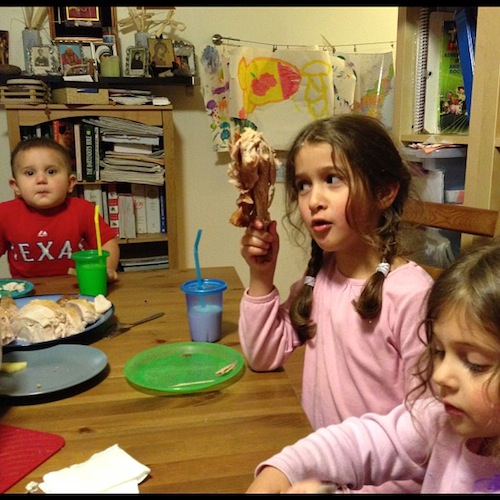 Bella with a turkey drumstick. She was so excited to get this huge drumstick: “It’s as big as my head!” she exclaimed.

I bought a turkey on Monday and roasted it Thursday because chickens were $1.10 a pound and turkeys were $.59. And i won’t be making a turkey for Thanksgiving anyway as we’ll be eating with the in-laws. I’m fine with that but I do like to have turkey leftovers to play with and in some ways it’s more fun before Thanksgiving.

It was 54 degrees today—and felt colder—and I look up and Ben’s outside barefoot and with only short sleeves. When I made him come in for shoes, socks, and a jacket I discovered he was also poopy when he was unable to sit comfortably in a chair for me to put on his socks. When I confronted him he admitted that he was cold and that “it hurts.” Diaper rash, ugh. But was he doing anything about it? No. 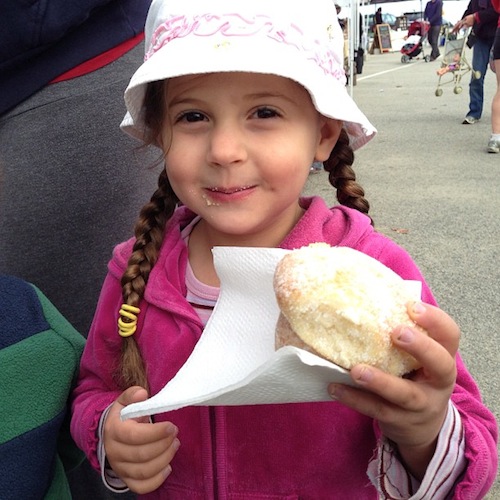 Sophie is so super cute. She was absolutely devastated Saturday before last when they were out of cider donuts and was so upset she didn’t get a treat at all while Bella had a chocolate cupcake and the boys split a cookie. Last Saturday she chose this gorgeous sugar brioche. Boy was she happy 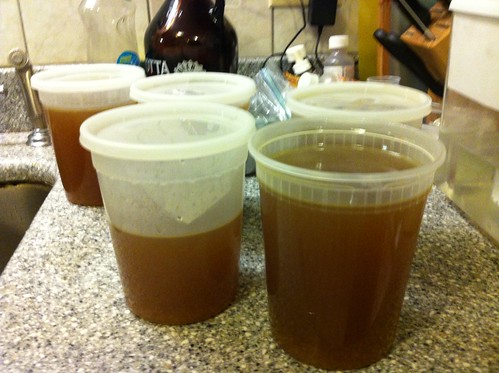 My most recent batch of chicken stock. It’s pretty dark, not the clear golden color of the stuff in the box. This batch had kale stems, I think as well as other random vegetable bits. It might not look pretty; ut this stuff is liquid gold, I tell you. Especially when I’m sick.

Sorry I’m all out of juice. I’ve got several posts I’m working on but none are really coming together for me. Another day gone by and I need to sleep. So I’ll just publish this now, ok?