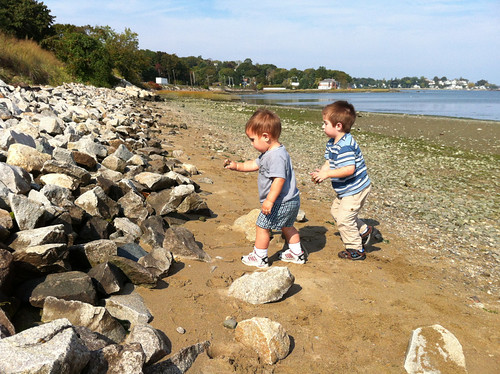 Ben and Anthony at the beach on Saturday morning.

Today we had to rush out the door to be at the pediatrician’s by 9 am. Somehow we totally missed Sophie’s physical in March when she turned four and the office sent us a card. So seven months after her birthday I finally got her in. Also all the kids got flu shots. I’m somewhat ambivalent about the flu shot but last year we all got it bad and this year we’re going to have a new baby right in the middle of flu season. I know that if we don’t get the shot and we do get the flu, I’ll be kicking myself. This way even if we do get another strain, I will have the satisfaction of knowing I did what I could to prevent it. 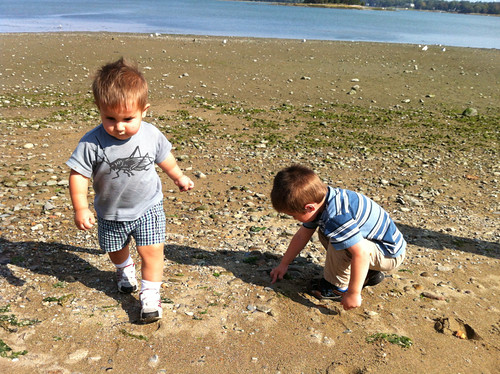 Anyway, our pediatrician and the receptionist both exclaimed about how good the kids all were. And they were good. And how little they cried at the shots. Ben and Anthony did cry a little but stopped within a minute after the shot was gone. Sophie and Bella were both very brave, though obviously distressed. Dr. S. kept telling them to look at me not her and Bella obediently did though I could tell she wanted to look at the needle. That’s exactly how I am. I want to see it go in so the prick isn’t a surprise. To me not seeing—as when I get the stupid spinal before a c-section—is so much worse. The anticipation and not knowing is far ickier than the needle piercing my flesh. Sophie just ignored the doctor and watched and held my hand. She wasn’t too traumatized by the flu shot; but the finger prick for the hemocrit and lead tests really upset her, having to have her finger squeezed again and again to get enough blood. Poor thing. 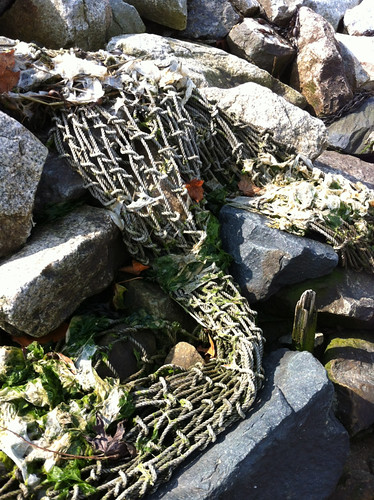 Net on the rocks

After the doctor visit we went to the library and returned all of our books except the one Antarctica book which has gone missing somewhere and The Everlasting Meal, which is due on Friday but I’m keeping it till I finish and paying the fine because that’s how I roll. I got a pile of books on ancient Egypt for Bella and a couple on Australia. For our history and geography studies respectively. Also a bunch on rocks and minerals because yesterday in the car she was asking me why rocks are shaped like they are as she studied a piece of rock (maybe shale?) I’d picked up on the beach on Saturday. So we had a nice geology discussion on the way to the grocery store. Then she asked about what clay is made of and then pointed out all the rock walls and other rocks she saw. I think we’re definitely in for a focus on rocks. 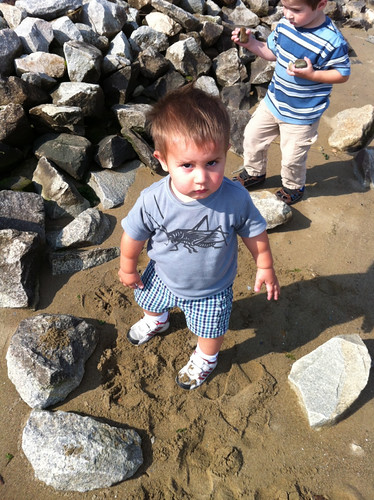 Anthony gives me “the look”

When we got home we had lunch and read some books. I read all of David Macauley’s Pyramid to Bella. Even before I read it to her, though, she’d already flipped through and studied all the pictures and enthused about it: “Thank you so much for getting me the Pyramid book, Mom!” And then tonight I heard her telling Dom that one of the rocks books had “pictures of a real volcano!” So though we didn’t do any math or reading or formal school, at least we did feed her hungry mind. 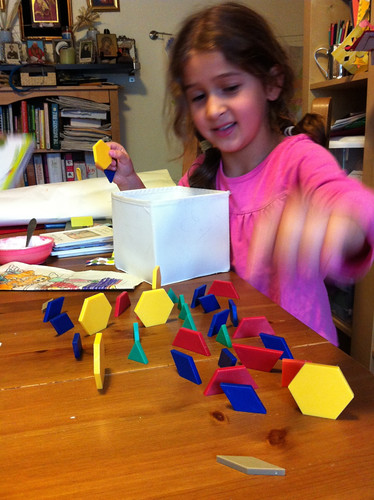 Bella invented this “video game” the other morning. The small gray diamonds were the two players, one was hers and the other belonged to her imaginary friend, Jane. Or rather, one was the player and the other was the “enemy” and she and Jane were taking turns playing either role. The player had to navigate the maze made with all the upended pattern blocks and then had to fight the enemy. 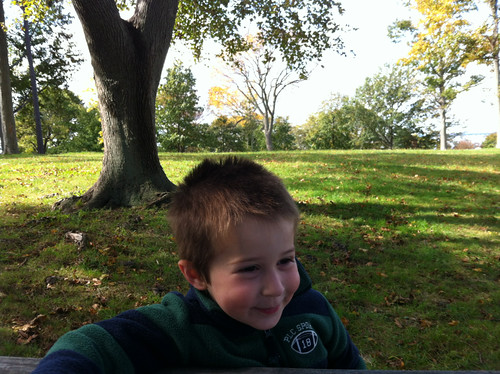 Speaking of math and reading, both are going pretty well the last two weeks. We’ve been fairly consistent about doing math right after breakfast. Bella does a brief lesson and that usually leads to doing a bit more than the lesson actually calls for. She’s very quick and the book goes rather slow. While Bella does math Sophie has decided to do a handwriting workbook I got for her. She does a page or two with my help. Then I do a lesson with both of the girls from The Ordinary Parent’s Guide to Teaching Reading. Starting the day with math and reading often means that the girls find other ways to practice those skills during the day. Bella loves to count by tens and twos and to try to count by fives. We often do very simple addition and subtraction. Sophie and Bella both like to find letters they recognize on signs and packages and books. And Bella, who is very resistant to any assigned handwriting practice, enjoyed painting letters in very large format on a big sheet of paper and then voluntarily amused herself for a good long time on Sunday copying out portions of book titles onto a piece of paper and doing it pretty well. Thus proving that she does know how to write most letters and does much better with the proper motivation. 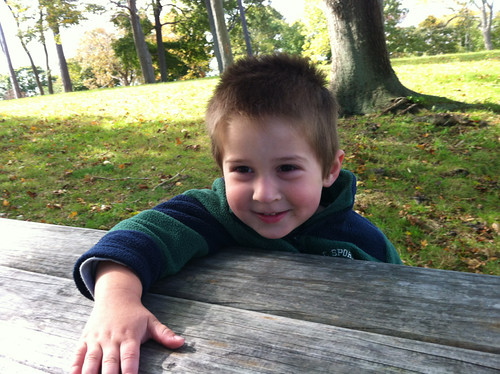 I got a good deal on some fine art postcard books on Amazon and we spent a day tearing them apart and filing them in a little box I got for the purpose. Both girls loved studying the Vermeer, Van Gogh, Cassat, O’Keeffe, and Renoir pictures and organizing and comparing and contrasting them. They exclaimed both over pictures they recognized and over new ones. Even Anthony and Ben took turns looking at some of the pictures. 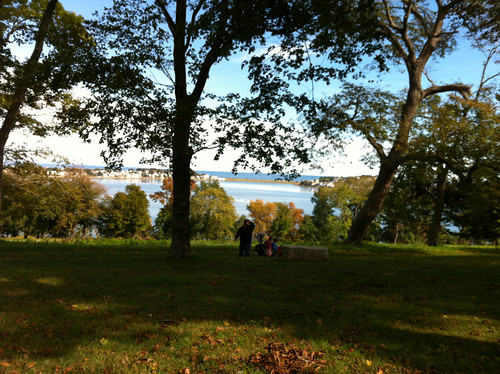 We spent an afternoon doing a science lesson from the book about air. Talking about how all matter has weight (mass) and takes up space. Weighing a bunch of things on the kitchen scale and blowing bubbles with straws were some highlights of the day. We tried to do something with balloons but couldn’t actually blow up the ones I’d bought so I have to postpone that part until I can buy some different ones. 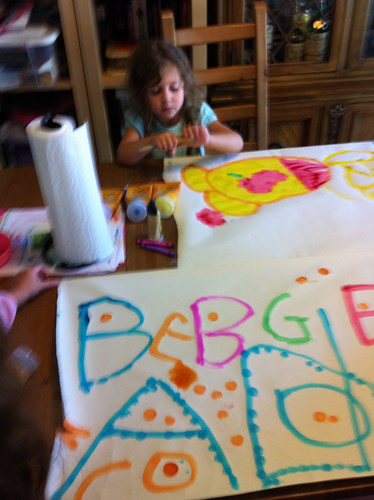 Sophie with her rocket ship. Bella’s picture in the foreground isn’t meant to spell a word. She was just practicing letters.

Dom gave an impromptu cooking lesson, talking the girls through the making of a pot of curry. Bella also got to pick out her own produce at the farmer’s market. She’s got a good understanding of what makes a balanced meal: “I haven’t had any fruit today,” she’ll announce. Or, “I need some protein.” 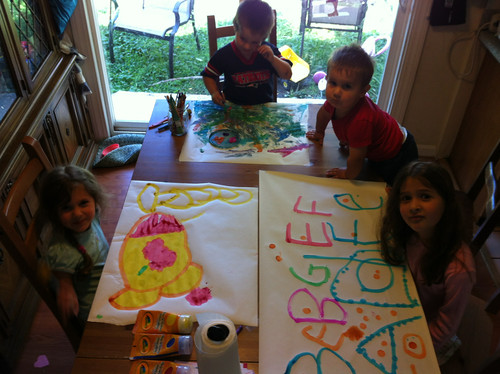 The other morning Ben was marching about singing a song he’d made up about Jesus. Then he and his sisters were acting out the Nativity story with Sophie as Mary and Bella as the Angel Gabriel. They all are able to join in saying the Our Father and Hail Mary and Glory Be—except that sometimes they refuse to do so. Even Anthony loves to make the sign of the cross and will repeatedly pat my arm and point to a cross of picture of Jesus: “Look, look, Jees, Jees!” 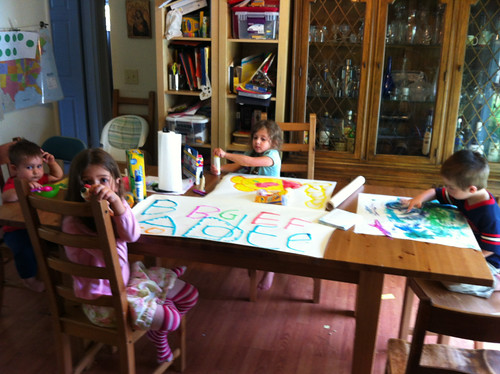 All in all I feel like I never quite seem to have enough time to do all the schoolish stuff that I want to do; but I am happy that the kids all have plenty of time for free play and exercising their creativity. I’m glad that they are eager to learn and explore and are full of questions. Seeing four kids sitting around in the living room looking at books or quietly engaged in interactive play and telling collaborative stories, I feel like a success. 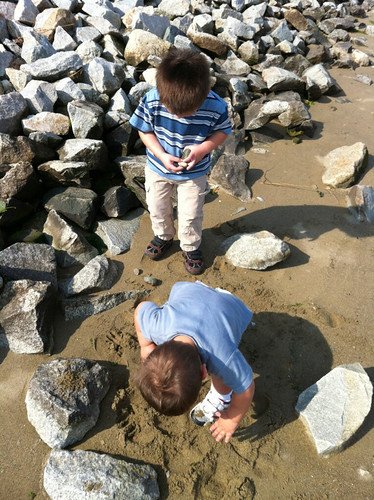 I don’t think I have a real point. Just taking stock. Thinking about what is and what could be. Far from perfection but… eh, not so bad either.