Where It All Begins 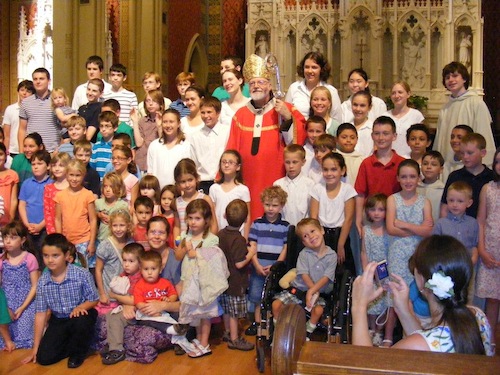 Do you see the Bettinellis, front and center? (I couldn’t get the kids in the picture without sitting in myself, which is why I’m the only mother in the “just the kids with the cardinal” photo.)

Many of my Catholic friends have a beautiful tradition of beginning their homeschooling year with a formal opening day and starting that off by taking everyone to Mass. I think I’m a little averse to the formal opening day thing—maybe I just have too much anxiety if I put too much weight on the first day. I’ve preferred to have a rolling start, beginning with one or two subjects a day and hopefully building to more consistency as we all figure out how to add in these new activities. So with no opening day, I didn’t take the kids to Mass at our parish—that probably would have derailed any attempts at lessons. However, this afternoon there was a formal opening Mass with Cardinal Sean for all homeschoolers in our diocese. I think there could have been no better way to kick of the school year.

Mass was at Our Lady Help of Christians parish in Newton, an absolutely gorgeous church. There was an opportunity for people to come early and have lunch and spend time socializing but last night was a terrible night. (I’d had a little tiny 8 ounces of Coke at lunch and my caffeine-sensitive toddler decided he couldn’t sleep. He spent most of the night bouncing between our bed and a pallet on the floor in our room. additionally, each of the other three had a wakeup. This after the two previous nights everyone had slept through the night without a peep.) So we were late getting started and arrived just before Mass began, having to squeeze through the knot of priests and altar servers waiting for the cardinal at the back of the church. But we did manage to sit before the opening hymn began. And though it was high nap time and Anthony only slept twenty minutes or so in the car, we made it through Mass with no meltdowns and only a few slight, quickly quashed crises (such as when Anthony thought it would be funny to bite my shoulder. Ouch!) Of course in that crowd a fussy baby or screaming toddler would have raised no eyebrows and received no stink-eyes. We were one of the smaller families present and there were plenty of babies and no shortage of happy squawks and miserable wails. 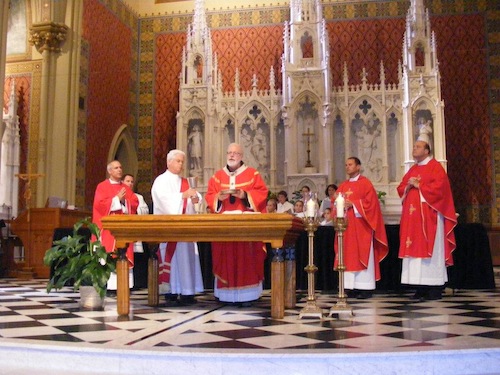 Cardinal Sean gave an inspiring homily in which he referred to homeschooling as an excellent form of Catholic education and exhorted parents as the primary educators of their children to teach their children above all to fall in love with Christ. He also quipped that St Anne homeschooled Mary and that Jesus was homeschooled by Mary and Joseph. We are so very blessed to have a bishop who understands and supports the homeschoolers in his flock. He’s even appointed Father Ed Riley, our former pastor and current director of formation at the seminary, as a special liaison to the homeschooling community.

The children’s choir sang beautifully. I wish I’d kept the program because my tired mommy brain doesn’t remember the selection of hymns. But I was blown away by the Kyrie and Sanctus and, well everything. I wished we could have lingered and looked at the church. I wish we could have been there early enough to have real conversations with all the fabulous friends who were there, most of our homeschooling acquaintances live much too far away to see more than a few times a year.

The drive there and back was a strain and everyone was tired and cranky when we got home and again at bedtime. Still, of all the special outings we can squeeze into our school year, I think this is one of the most important both for the kids and for me. A wonderful reminder of why we do what we do and that all of it must begin and end in the love of Christ and, as Cardinal Sean reminded us, the most important knowledge of all is the knowledge of Christ’s love for us, the love of an enthusiastic bridegroom for his beloved bride. 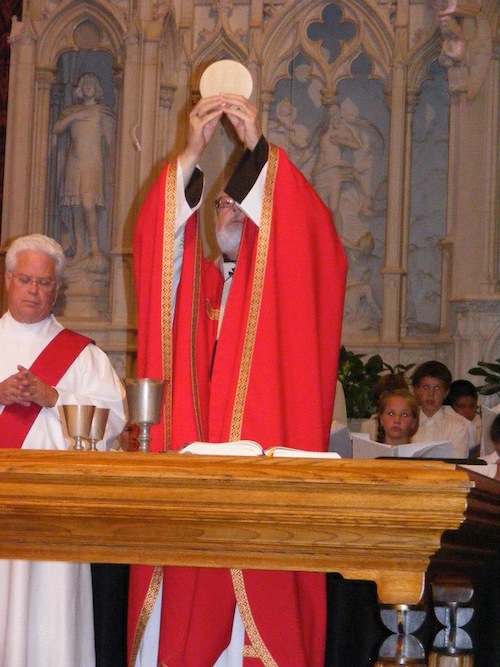 What a blessed way to begin the academic year!

Many thanks to Dalila Patrizzi for the use of the photos. I was far too busy to take any of my own. Also, a very great thank you to her for doing all the hard work of organizing the Mass. That it happened at all is really a testimony to her perseverance and faith.