Adventure at the Museum of Fine Arts 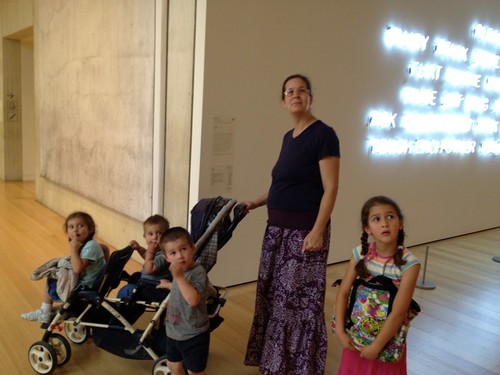 Looking at a digital sign outside one of the museum cafes. The sign was some contemporary art piece that Sophie wanted me to read to her. I love the expressions on all the kids’ faces, captivated by the moving lights.

On Thursday Mom and I took the kids to Boston for a visit to the Museum of Fine Arts. I wanted to catch a Renoir exhibit before it ended next week. I knew that both Bella and Sophie would enjoy the experience and recognize the three Renoir pieces as well as several of the other Impressionists. Then, I figured we’d wander a bit and let them get a taste of what the museum had to offer. I went ahead and bought a membership so we can come back again and again to experience the Egyptian and Greek and Roman art as we get to them in our history studies and because I want all of the children to get used to going to museums and looking at art without needing to feel rushed or like we have to try to see everything in one trip. 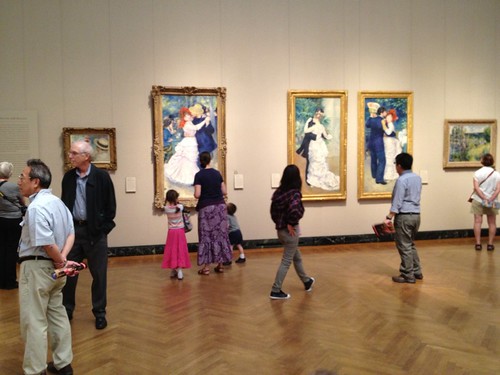 The MFA brought in two canvases from the Musee d’Orsay in Paris to show Renoir’s three large dancing paintings together. I wish we could have lingered longer but we moved through this gallery and really the whole museum at a pace that was comfortable to Ben. Still, pretty awesome to see these pieces together. 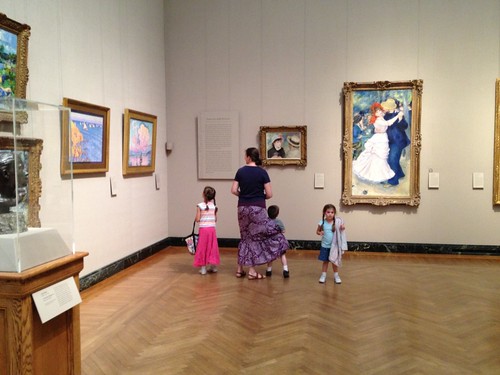 Ben kept tangling himself up in my skirt. Ugh. Why must he do that. He raced through this gallery excitedly pointing at each painting. Then when we moved on to the next gallery he just crumpled. “I want to go back to where there’s sun!” he complained. Overwhelmed already, I had to pick him up as he sobbed loudly. I carried him through a couple of rooms and then when he’d stopped crying I put him into the stroller. After that he was fine for the rest of our visit. He whined and complained a bit but no more loud scenes.In general he was a great trooper who patiently tolerated many, many galleries of pictures, most of which he was completely indifferent to though every once in a while something did catch his fancy. Still, I think in the future he will come to be as great a museum lover as his sisters. Had I been able to give him 100% of my attention and really guide his experience, I don’t think he’d even have whined so much; but I was also guiding Bella and Sophie and trying to navigate our path through the museum. 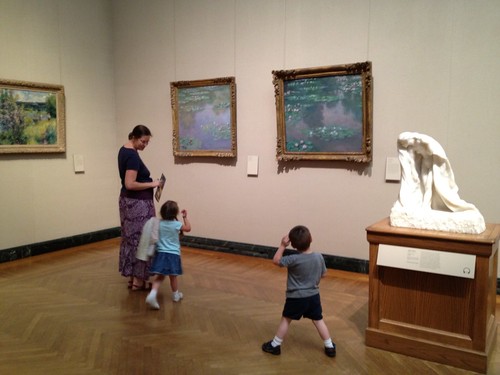 We have a very cute book, Linnea in Monet’s Garden

, about a little girl who goes to Paris in search of Monet’s water lilies. Bella and Sophie love it. Tonight after having seen some Monet’s paintings in person, Ben requested it as his bedtime story. See, I think it is already beginning to sink in a little bit. 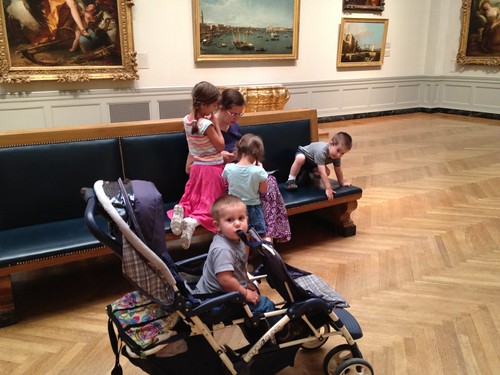 Taking a little rest. The girls are looking at some of the photos I just snapped on the iPhone. How can art compete with photos of themselves with the art? 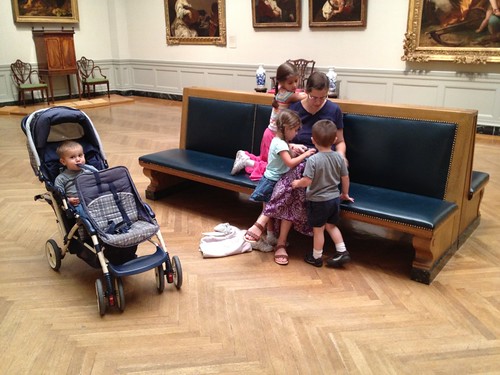 Anthony was an awesome trooper too. he sat calmly in the stroller for a long time. We got to the museum at about 10 and left around 2 with a break for lunch between 12 and 12:30. He got rather boisterous at lunch and his shriek earned us a few glances from other patrons in the cafeteria, but in the galleries he was so very well behaved with the only exception I can recall being the time when he began kicking Ben in the back at which point we swapped Anthony to the front of the stroller and Ben to the back seat, satisfying both boys. Toward the end he got a bit cranky and he was almost asleep in the stroller as we walked back to the car. He might be into everything at home; but he is surprisingly tranquil when we are out and about. 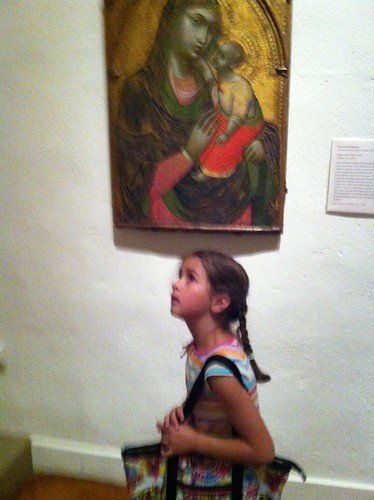 Bella loved every minute of it, though her little legs did get very tired by the end. She was so excited to see the Impressionist paintings, she loved the religious art and proved herself quite adept at identifying the subjects of various pieces. She was so thrilled when we found a canvas by her beloved Mary Cassat. Oh how her eyes glowed. (And why didn’t I snap a photo at that point? Oh yeah, I was too busy drinking in her joy.) She was quite surprised to see furniture and table ware being treated as works of art: “I didn’t know they had things like that at the museum!” 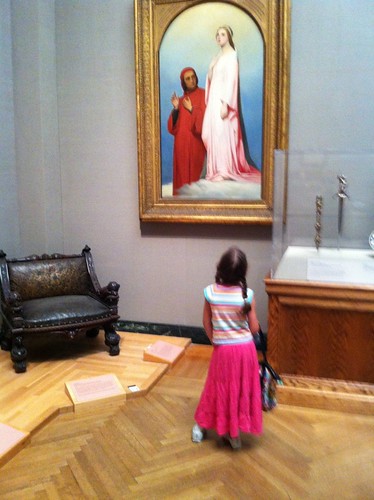 Dante and Beatrice. Someday she’ll know who they are. 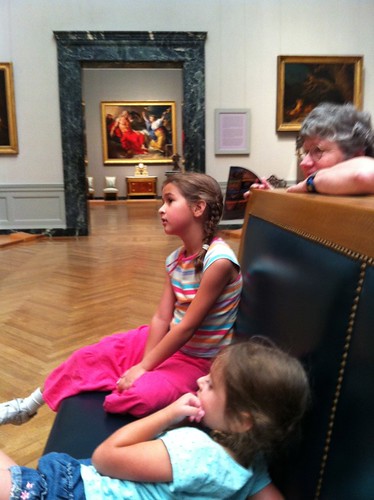 The girls taking a rest. 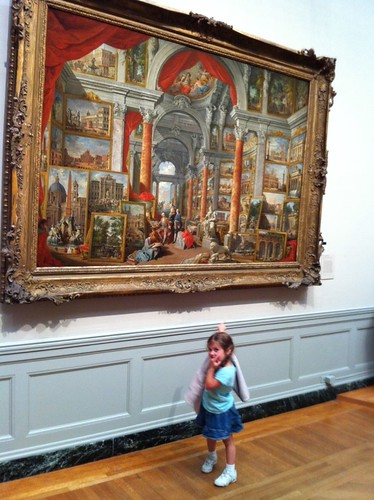 Sophie was delighted with a painting that had paintings in it. 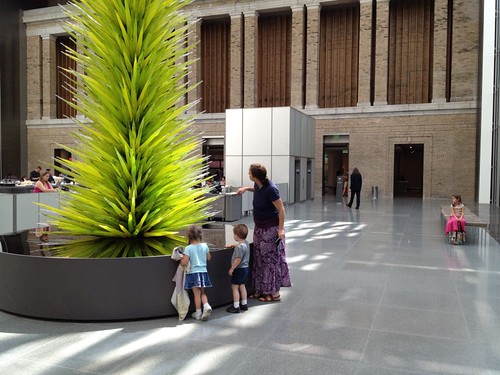 This tree made of green glass icicles reached almost to the ceiling. Poor tired Bella on a bench in the background. Her legs were giving up. 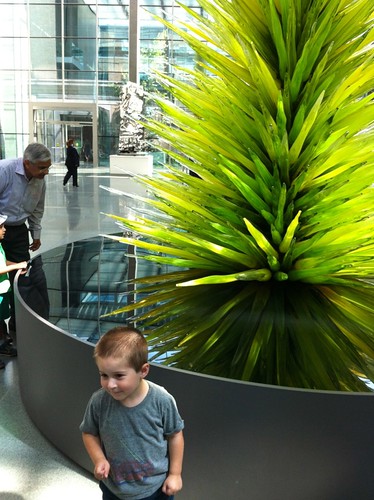 Ben on the move. He doesn’t want to stand still so I can take his picture. 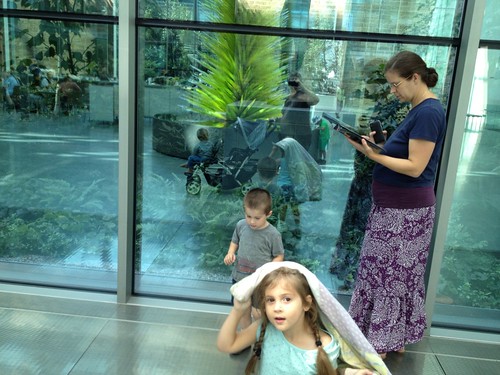 We pause to get our bearings. The exit has to be around here somewhere. 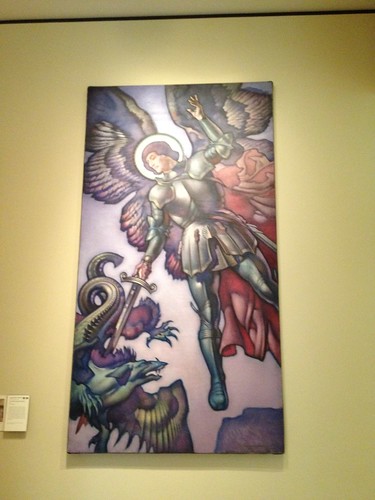 This St Michael by George Hawley Hallowell was one of Ben’s favorite pieces. I’d love to find a print of it for him. 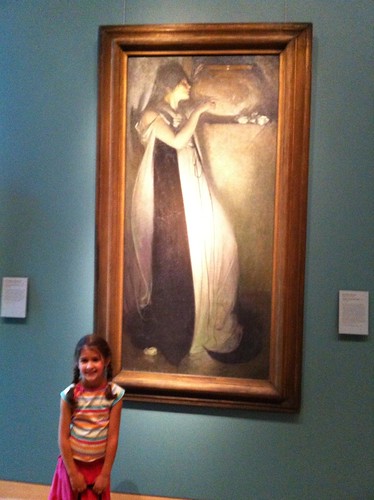 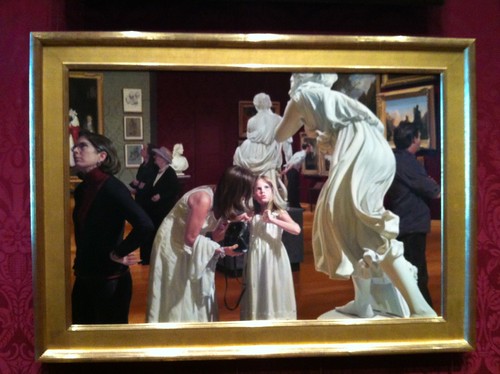 We were all charmed by this 2012 painting, Warren Prosperi’s Museum Epiphany III, a painting set in the gallery that it hangs in. Bella was especially delighted: “I didn’t know there were new pictures in the museum!” 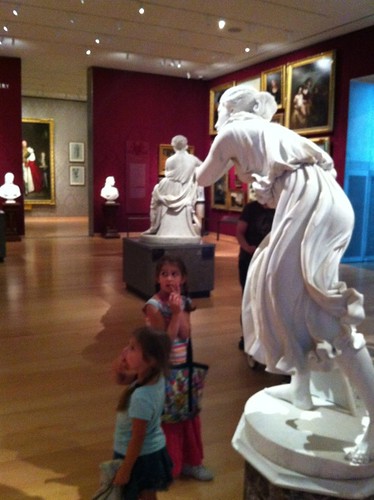 I tried to snap a picture of the girls in about the same location as the little girl in the painting. Then I showed it to them on the phone to see how the perspectives lined up.

We might have lingered a bit too long; I have a hard time pulling myself away from museums. So much to see. But we got out before anyone was having a meltdown and everyone reported having a good day. One sour note: I gave in to temptation and had a Coke at the cafeteria at lunch time. Then paid for it with a toddler who was up between about 12:30 and 3 am. Too much caffeine even for a child who only nurses once a day. Dom looked at all our pictures and heard our stories and was sad he couldn’t come with us. Bella will never have a first trip to the museum again. Well, I was sad too that I couldn’t go with him to the CNMC. This is our life, never quite enough time to do everything we want.

Still, I’ve decided that things are never going to get less complicated. I was a bit nervous about taking four small children to the museum; but when Lucia arrives in late December or early January things are just going to get more crazy. And after that, who knows. I’m going to embrace this crazy, complicated life with little people and stop waiting for a better time to do things. Once I decided that I wasn’t afraid of taking them all to the museum, I realized it was actually pretty easy to manage. I think I’d prefer to go with another adult; but I think even with Lucia perhaps we can manage a day at the museum. They have really nice nursing rooms with rocking chairs and little chairs for the kids to sit on and a changing table. Maybe this spring I’ll find that I’m even brave enough to take five little kids to the museum. 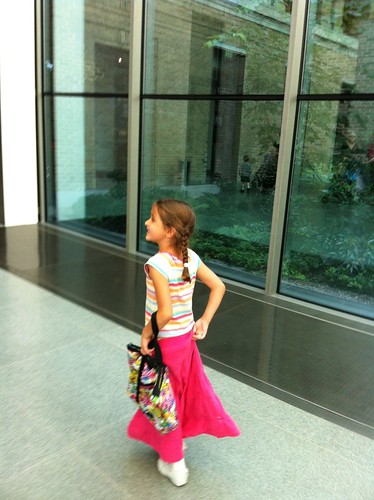 A final shot of Bella as we stride toward the exit. A day well spent indeed.