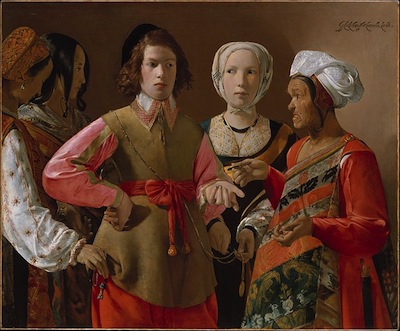 Madame Sosostris, famous clairvoyante,
Had a bad cold, nevertheless
Is known to be the wisest woman in Europe,
With a wicked pack of cards.

[I’ve tried to follow Eliot’s line breaks as much as possible, selecting sections of text where the sentence endings and line breaks coincide. But in this third section of Part I, the constant use of enjambment means I’m going to have to break up the lines and consider only the first half of line 46, the second half we’ll consider in the next post.]

These lines begin the third section of Part I. The focus of the poem shifts yet again to look at the character of Madame Sosostris.

First, she is a clairvoyante, the literal meaning of the word is someone who sees clearly, who has clear vision. (Question: Does she see clearly? Can we trust her vision or is she leading us astray?) Figuratively, a clairvoyant is someone who has the ability to gain information about a person, event, object via a means other than the natural human senses, through some form of extra-sensory perception. In other words, she is a fortuneteller.

Second, she “had a bad cold” (love the sound and rhythm of those words: “had” “bad” “cold” the short vowels and the hard D at the end. It has the feel of a child’s reading lesson, especially in contrast with the Latinate the polysyllables of the line before. And I bet that’s intentional. Even a child can see that there’s something fishy about Madame Sosostris.) What is the significance of her cold? There is something diseased about her. In later commentary about the poem Eliot regrets his mention of the Tarot in the notes to this section because it sent so many people on a wild goose chase. In The Four Quartets Eliot makes clear his disdain for fortune-telling and the occult (In section V of Dry Salvages he refers to them as “usual pastimes and drugs, and features of the press.”) Even here, though, it is obvious we aren’t supposed to trust this fortune teller with her “bad cold” and “wicked” cards. I think there is a play on the word “cold” too. We’re returning to the winter/spring imagery of the first lines. Madame Sosostris has not thawed with the coming of spring but is still cold. I think you can lump fortune telling in with staying up all night and traveling south in the winter as another form of trying to defy the constraints of time and nature. It is an attempt to control the natural world.

“Nevertheless” set apart by the enjambment. There’s something tricky about this “nevertheless” but I can’t put my finger on it.

She “is known to be” not “she is.” Do we trust the judgment of those people who “know” Madame Sosostris to be the “wisest woman in Europe”? Again, I think, we see the narrator’s disdain for the people who dwell in the modern waste land, who place their trust in fortune tellers, fixing their gaze on an unknowable future while forgetting the wisdom of the past. Madame Sosotris is the second seer we’ve encountered if you include the Sibyl in the epigraph. We’ll return to the figure of the seer later when we encounter Tiresias.

“With a wicked pack of cards” There is no ambiguity here about with the adjective “wicked’. Attempting to know the future is dangerous business and a form of clinging to the temporal dimension instead of seeking the eternal. It’s really a form of fear, isn’t it?

I’m stalling out on this section. Think I’ll just publish this now and move on to the next few lines. Please feel free to comment at length.

Previous Post: You Gave Me Hyacinths—Blogging The Waste Land Part 10