Life has been crazy in the past week. Too busy for blogging—or I’ve been too tired. So I’m going to cram a lot of things that could be full length posts into a quick takes and call it a day. 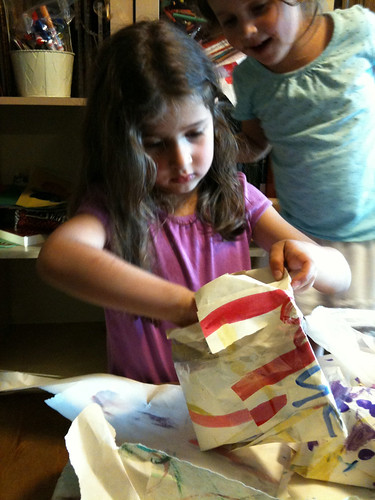 My clever wrapping paper was sheets of the kids’ paintings. All I had on hand was Christmas paper.

p>
Last Friday was Bella’s 6th birthday. We were too busy celebrating for me to write about it. But my first baby is a tall, skinny girl whose most burning existential question is which order of religious sisters God will one day call her to join. I’m sad that I didn’t get around to writing a retrospective birthday post—I can’t believe how six years have flown! 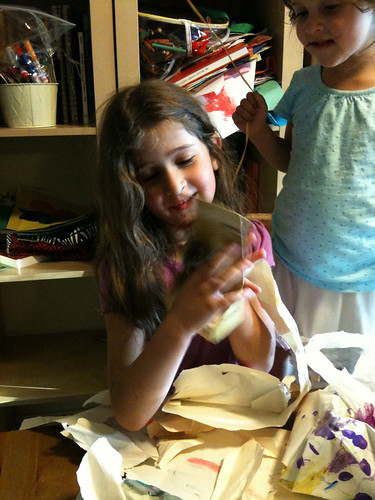 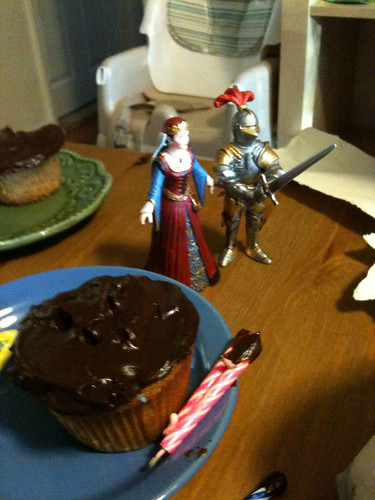 We had lemon cupcakes with chocolate icing per Bella’s request. The knight and princess were highly prized presents. 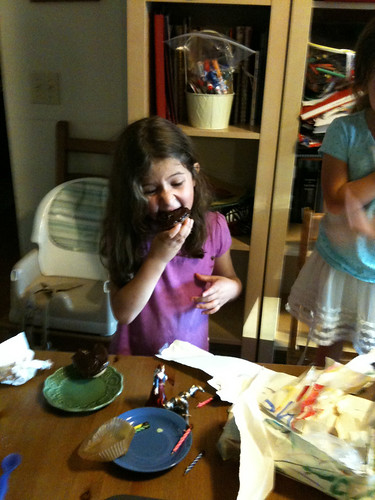 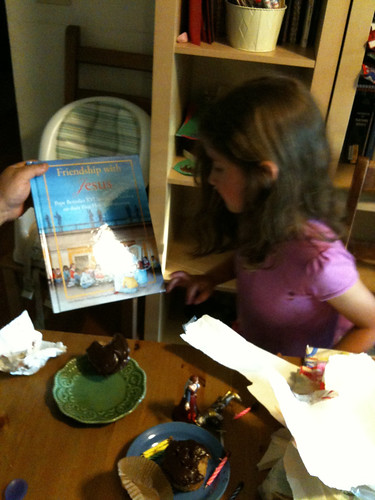 Dom and I might love this book, Amy Welborn’s Friendship with Jesus, even more than Bella does. 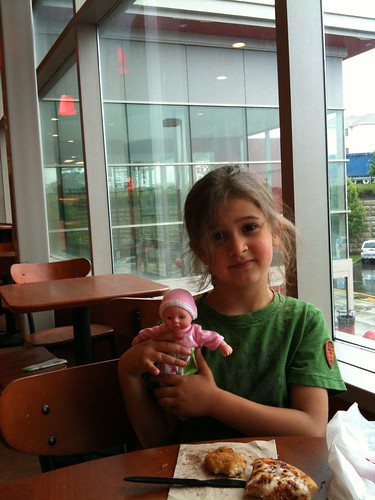 One of Bella’s birthday presents was a Target gift card from Grandma B. So on this week’s routine trip to Target she bought herself a little baby doll. Then she bought Sophie a little notepad and Ben a little matchbox car. What a sweet, generous girl she is! 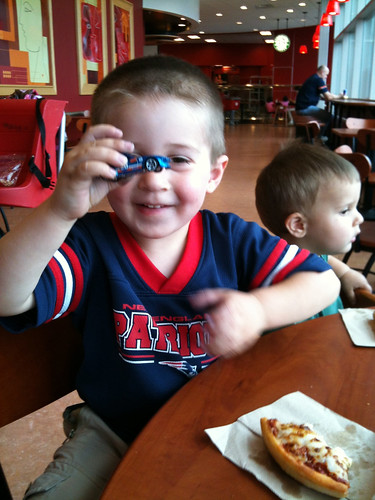 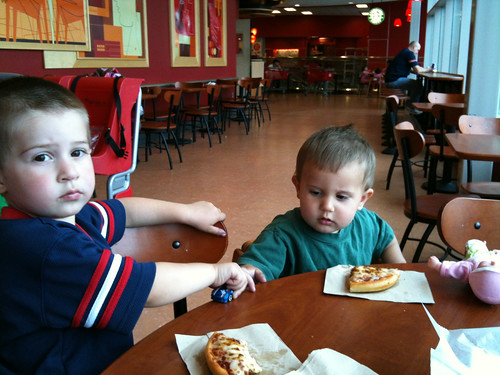 No photo of Sophie with her gift. She was mad at me for buying pizza and chicken fingers instead of treats from Starbucks. Mean mommy! 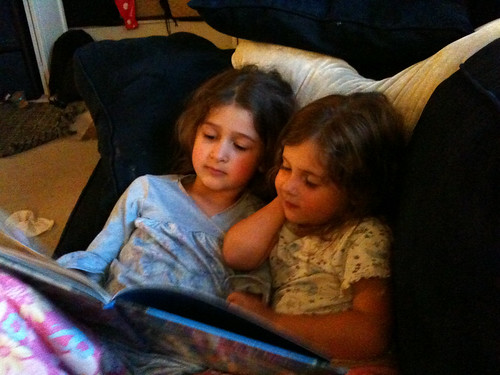 The girls cozy up with the story of Queen Esther. I found hamentashen pastries at the grocery store and we just had to try them because they are mentioned in our book. Then we had to read the book again.

Last Saturday I went to to New England Catholic Homeschooling Conference. Anthony went with me, which mostly explains why I didn’t get any pictures. He was very, very good; but you know he is a bit of a handful. I had a wonderful day, a sort of mini-retreat. (One of the moms I met said she felt almost guilty for how lovely it was to have just one child.) I thought it was very wise of the organizers to say only teens and nursing infants were allowed. It freed us moms (and some dads too, of course) to really get the most out of the day. I met many wonderful women, most of whose names I no longer remember. One I’ll never forget, though—I finally got to meet The Philosopher Mom! We’ve been virtual friends for a long time now and it was so very lovely to finally get to meet in person. I also got to reconnect with our former pastor, who is now the official diocesan spiritual director for homeschoolers, which is really wonderful since I’ve heard that many dioceses refuse to acknowledge homeschoolers and even view them with hostility. I got to see Danielle Bean again, to catch up briefly with my sister-in-law, to have a nice visit with frequent commenter scotch meg, to chat with Leticia of Cause of Our Joy, who I’m always happy to see again, and who told me the wonderful story of her header photo. And of course I didn’t get away without buying some books. Oh what a joyous whirlwind day it was! 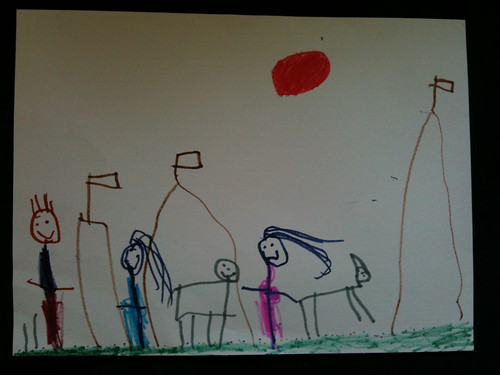 Bella drew a picture based on a scene in Little House on the Prairie where Pa takes Laura and Mary to an Indian camp. She drew in a rabbit and Jack the bulldog and the beads Laura and Mary collected are all over the ground.

One of the fruits of going to the conference was finding out that there really are some Catholic homeschoolers who are in my immediate area. The two big official groups that I know about are both rather too far away for us to really do anything with. I’ve joined the group my sister-in-law belongs to and they are a lovely group of ladies who I always enjoy spending time with. But all their activities are on the north side of Boston and really it’s too far away. Until Saturday I hadn’t been able to make contact with the southern group of homeschoolers, though they are also a bit too far away. But when I did chat with the very nice lady who was manning their table, she told me there were a handful of women who were in neighboring towns. So I gave her my contact information to pass on to one of them. And she emailed me! And t turns out there is a small, unofficial group of families who all live in towns adjacent to mine. We’re going to meet up with them next week. But in the meantime I’ve been having a lovely email correspondence. Wouldn’t you know it but the nearest Catholic homeschooler also does a Charlotte Mason/classical approach? I can’t wait to meet in person. 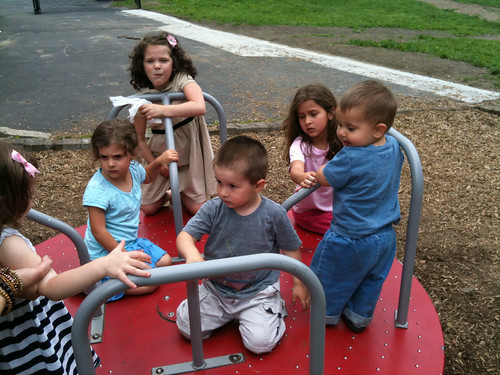 On the playground after Adoration. My kids look like they’re ready to rumble.

The other fruit of the conference was that Fr. Riley, our former pastor, introduced me to a woman who organizes a monthly adoration for homeschoolers in the Boston area. It isn’t very close—an hour away. But it is closer than the North Shore adoration. So today we went and we had the most marvelous time. First, we got to drive through Boston, which wouldn’t be a selling point for most people but it sort of completed last week’s Make Way for Ducklings tour because Bella got to see the Charles river and the bridge and the island in the river. And oh how she chortled when I told her that the road we were driving on was the highway the ducks crossed in the story, when policeman Michael stopped the cars for them.

Adoration was a perfectly designed half hour, just long enough for the bigger kids to really get into it and not so long that the littles were unable to handle it. We sat up close near the altar rather than in the pews so that the children could really see what was going on. Father Harrington, who was filling in for Fr Riley, did a great job at catechesis, really explaining and guiding the children through the whole thing. I loved that while we did some very simple “Jesus I love you, Jesus I adore you” praise songs, we also balanced them with O Salutaris Hostia, Tantum Ergo, and Holy God We Praise Thy Name. The formal prayers that the children were less familiar like the Divine Praises were balanced by the simple Hail Mary which almost everyone knew. Bella answered several questions during the brief catechesis session and Sophie was very proud of herself for kneeling with the big kids. After adoration and benediction, there was an easy craft, making a Holy Spirit dove. And then we all went to the playground where the children ran off all their energy and had a picnic lunch on the go. We are definitely going back next month. 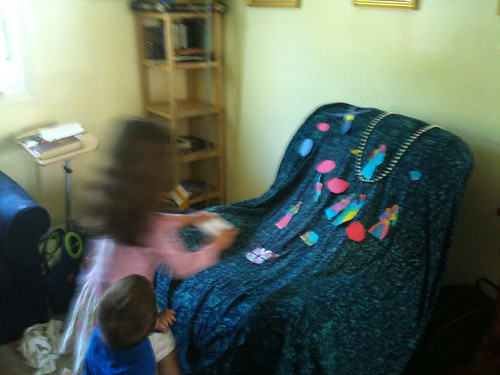 The children decorated the recliner as a Christmas tree and then played Christmas. Here Bella is the mother taking pictures. (Her camera is a block.)

Sadly, it was a long morning and Anthony slept all the way home and then woke up as soon as we pulled into the driveway. Then he and the girls needed so much attention all afternoon. I didn’t get even a little rest. So by dinner time I was feeling really queasy for the first time. Fortunately we had enough leftovers from last night that I didn’t have to cook. Still, not happy about this harbinger of days to come. 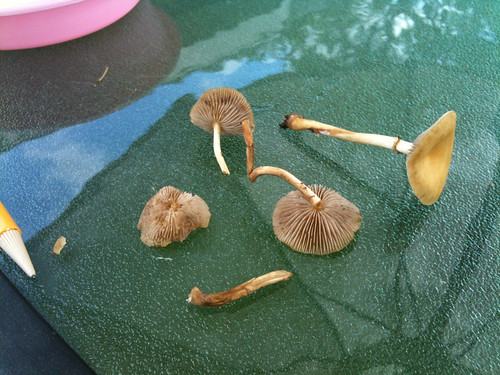 Bella and I have started studying mushrooms and fungi. We are beginning with identifying specimens from our yard. We have a couple of guidebooks and though we weren’t able to make a positive identification, we have both learned a lot about what to look for. We have been drawing our specimens in our nature notebooks.

Hey, I actually did a quick takes on a Friday and can participate in the link up!!! You can head over to Conversion Diary where Jen has a roundup of more quick takes.