Quick Takes—Falling in Love and Wasps 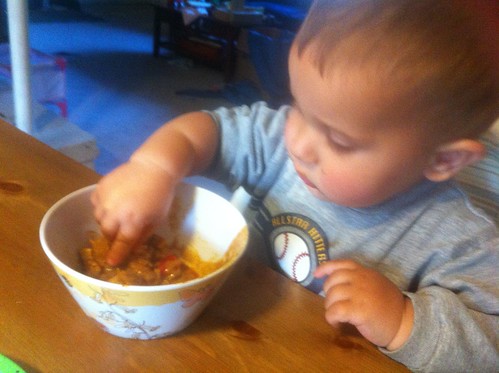 Anthony likes curry; but not with rice. He pushed away the first bowl I gave him and then whined till I gave him some sans rice. So far we’re evenly split: Sophie and Anthony like curry while Ben and Bella eat only plain rice.

1. We told the children that we are expecting a new baby while they were eating their pancakes Sunday after Mass. Bella sparkled with excitement: “REALLY?!?!!!” Sophie had a more subtle gleam but it was there. She kept asking me throughout the day: “It is real? Is it true? Do you really have a baby in your belly?” In an excited kind of way. Ben just asked if he could have another “pakepake” (That’s pancake for those who don’t speak Ben.) 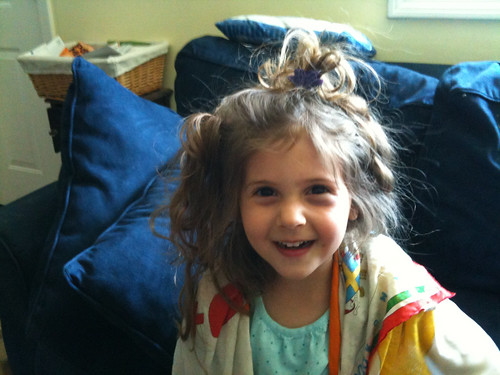 Sophie, dressed as a priest. She told me that the scarves were her vestments. Oh and, yes, she was a male. Bella did her hair.

2. At dinner we were discussing names. Bella is still lobbying as strongly for “Baby Rose” as she was when we were expecting Anthony. Sophie suggested, “Mary… or Dogggie-Cup,” and then proceeded to bombard us with bunch of silly names in the “Doggie-Cup” vein. What can I say? She’s four. (Doggie-Cup refers to her favorite sippy cup that has cartoon dogs on it. Yes, they still all use sippy cups because they travel well and it minimizes spills at the table. Which is important when the 14 month old is constantly pulling down anything he can reach. Oh and has just learned how to climb onto the chairs and thence onto the table.) 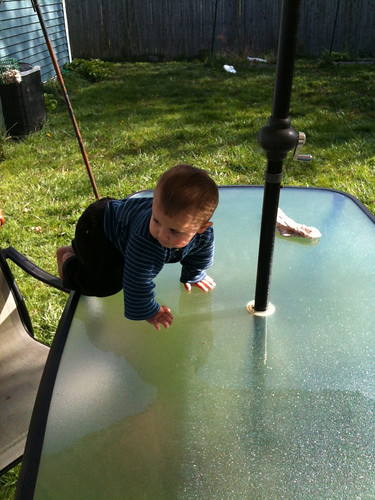 Anthony climbs onto the table.

3. Yes, did I mention that Anthony is a climbing-crazed climber person? He’s figured out how to push the stool around and get to the kitchen counters. And how to climb onto the kitchen chairs and thence onto the table. Dom caught him just about to throw down an open container of flour on Sunday. No, I’d left the closed container on the kitchen table but Anthony pushed the stool over to the chair, mounted the chair, then climbed onto the table and grabbed down the container then opened the latch on the container. He’s driving me crazy. Especially since this last week has been cold and rainy and he hasn’t been able to play outside. He’s been perfecting his getting into stuff mode. I feel bad for the constant chorus of, “No, Anthony!” except that he really doesn’t seem to listen at all. 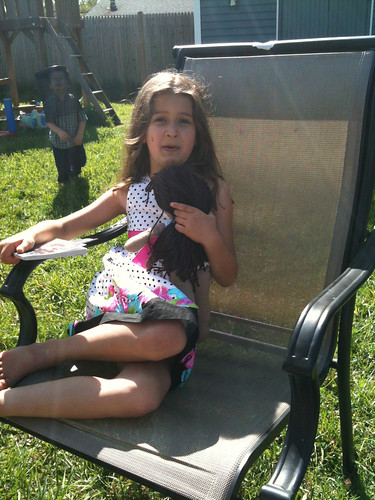 4. Bella told me today that she is “falling in love with St Gianna Molla.” We are reading this biography of St Gianna

and although Bella is still convinced that she heard God’s call to her to be a nun when she was at Mass on Holy Thursday, she is wonderfully surprised to discover a saint who is a loving wife and mother and doctor. She is very insistent about her call, by the way, every time it comes up she tells me gravely that it is “a very true thing. I really heard God’s call for me and it is to be a religious sister.” And then she seriously wonders what order she will join, “I don’t know yet what order God will call me to.” (I don’t necessarily recommend these books for children as young as Bella. I’ve had to do some editing as I read and we’ve had some discussions about the fairly intense material. Reading about martyrs is tough.) 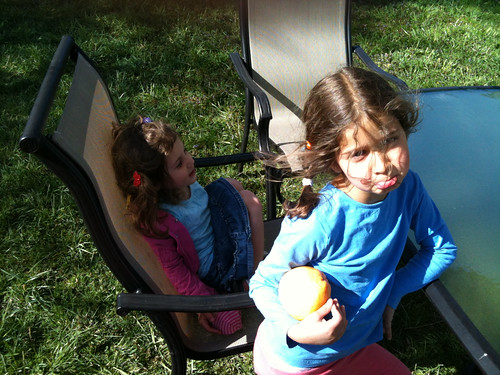 I no longer remember why Bella was pouting. Probably I wouldn’t read her a book.

5. Bella sat on a wasp on Sunday and got a sting in a very sensitive spot. She came in screaming, tears streaming, “I never knew how painful it could be!” she exclaimed. “If I had only known how painful they were!” Dom and I were trying unsuccessfully not to laugh at her dramatic expostulations. She was so much in pain and yet so over the top and yet with such funny word choice. So gravely surprised.

The funny thing was that when we were getting into the car after Mass there was a bee on my seat and I almost sat on it and got the same sting except that Sophie warned me just in time that there was a bee in the car. 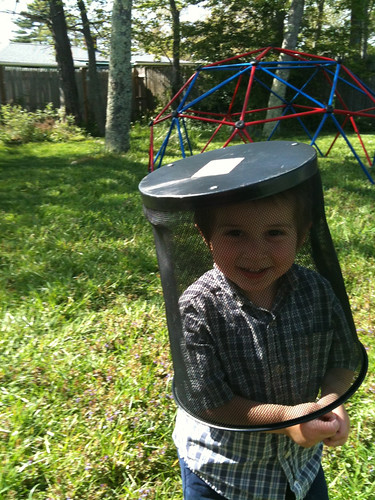 Why does Ben have a trash can on his head? I have no idea.

6. Bella has decided that she loves listening to the Office of Readings. And most especially she loves the Book of Revelation. I have no idea why and I don’t think she does either. Her explanation is something jumbled about listening to it in the car while on the way home from Home Depot after she’d shut the door on her wrist. And something about loving St John. He’s in all her crucifixion pictures, at the foot of the cross with Mary and Mary Magdalene. So there’s that. Still, I often wonder what she’s making of all the bizarre imagery. 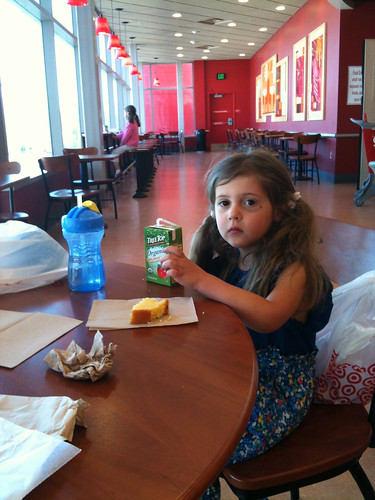 Having a treat at the Starbucks in Target. Sophie’s black eye happened when Bella tried to throw a wooden pot at the play kitchen and it accidentally went into Sophie’s bed instead. That’s Bella sitting alone at the counter by the window in the background. I’m not sure why she chose to sit all the way over there.