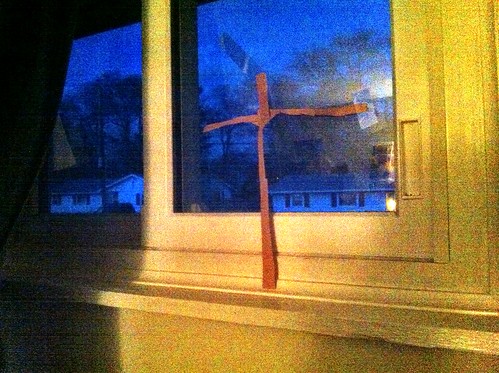 Bella decided to decorate for Holy Week. She cut out this cross and hung it in her bedroom window. Then she cut out pictures of Holy Mary and St Mary Magdalene and others and hung them around the house: on the front door, in the living room window, above the fireplace.

On Good Friday when we went up to venerate the cross Ben and Sophie didn’t stop to kiss it. And I was a bit too worried about herding them and the huge line of people behind me to try to coax them. And I knew that it would be easier after the service. So in the quiet after I’d put on their coats I asked Sophie, “Would you like to go kiss the cross now?” Her eyes lit up in that way they have, huge and sparkling, and she nodded with a huge smile as if to say, Oh thank you for understanding! She held my hand and we approached the huge cross, at least seven feet tall, that lay at the foot of the altar, flanked by four flickering candles. She bent and kissed it and I looked up to see Ben watching. I approached him, “Do you want to kiss the cross too?” He did. He held my hand and we went up slowly and when we reached the cross he bent and gave it a big solemn smooch. Then he looked up at me and declared, “The cross is happy.” Oh? Why is that? “Because it’s laying down.” Later he was to tell me that it was because they were holding it. And even later he was to elaborate that it was because everyone was hugging and kissing it. In any case, the cross is happy, my friends. The cross is happy. 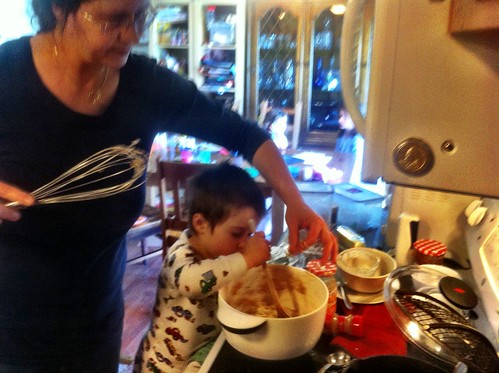 On Saturday night when the lights went out in the church Ben was a bit afraid until my sister comforted him and then lifted him up where he could see as she explained about how Christ was going to come into the darkness. Meanwhile Anthony kept looking over my shoulder at the altar, wondering when something was going to happen. I pointed to the back of the church where the Easter candle was being held aloft. “Look, Anthony!” He did turn and look and then pointed, “Oh! Oh! Oh!” his voice full of wonder and he reached and I think everyone in the church heard his voice. 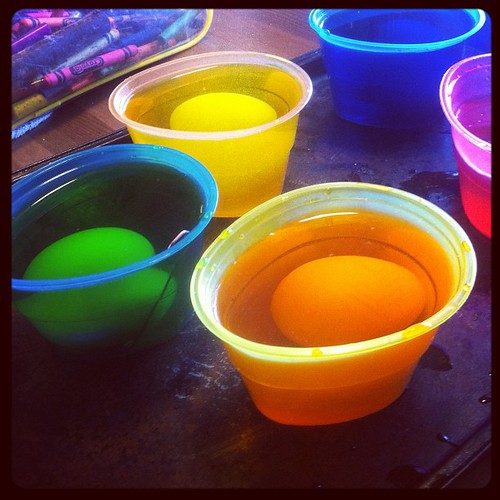 Dom supervised the egg dying. He’s much more patient than I am and even he got a bit snappish trying to keep our three eager egg dyers in line.

As I lit Sophie’s candle her eyes were gleaming and her face aglow from within. I usually think this part of the Mass is far too short and hate the moment where we all extinguish our candles to sit in the darkness and hear the words proclaimed. Last night it couldn’t come soon enough as I watched my four year old’s candle wavering in her unsteady hand, swaying this way and that and then wandering behind me to sit on the other side. My right hand held my own candle and my left held Anthony, all thirty-some pounds of him, so I could hardly keep watch over her. Dom had Bella, herself a handful, and my sister had Ben. On reflection, I should have just blown my own candle out and taken hers away. But oh it was as beautiful as always in that church with everything aglow in the wonderful light, divided but undimmed as the Exsultet rang out (oh the glorious new translation!) and I knew it was really true: Christ is risen. 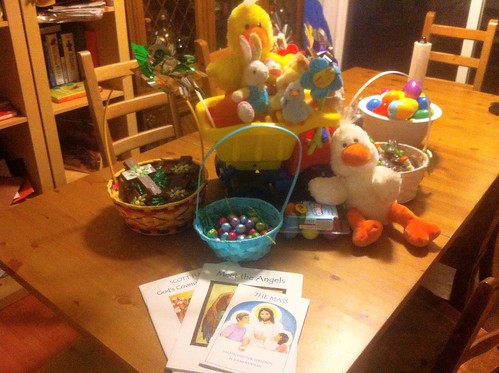 The Easter baskets. The girls didn’t get to see this arrangement because Ben had already destroyed it long before they got up.

On Easter Sunday morning Ben and Anthony were up at six. I was nursing Anthony in bed when I heard Ben fussing in the hall. I called out to him and he opened the door and stood there still crying, “I want to go trick-or-treating!” When we tried to explain that is a different holiday, he threw himself onto the floor and wailed. Finally I convinced him to go into the dining room to look at the Easter baskets. He was overjoyed that Santa had brought him a new dump truck and some candy. He immediately began playing with the truck and the duckies. (The stuffed animals were gifts from family in previous years. They get boxed up and brought out each Easter for new fun.) Sophie declared that Easter is Lambie’s birthday. Lambie was one of the animals I overlooked when I was boxing up last year’s Easter goodies. 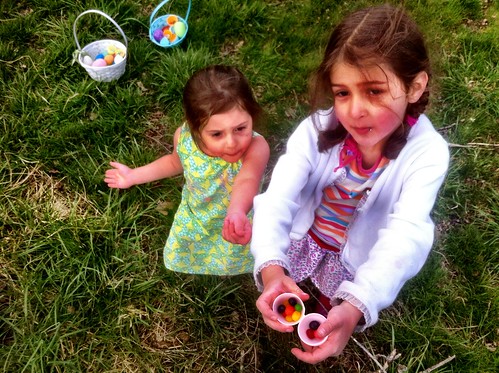 Even though Bella specifically asked for jelly beans, it turned out she’d confused them and M&Ms. So the girls gave all the jelly beans to Dom. The girls were both very good at helping Ben to find eggs, making sure he had more than his fair share of the haul. It was very sweet. 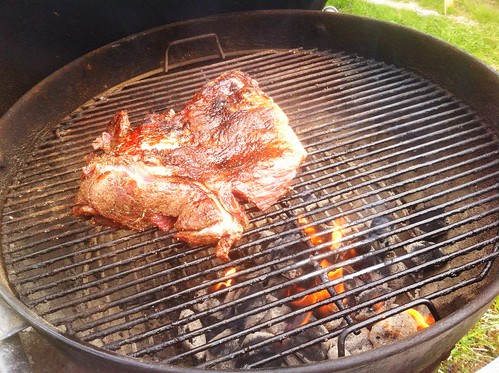 For Easter dinner we had a quiet meal here. Dom grilled a butterflied leg of lamb. I made mashed turnips and carrots, a lemony-cheesy spinach and artichoke dish, and at Bella’s request roasted beets and peas and corn with lots of butter. We went over to Dom’s brother’s house for dessert with all the Bettinelli clan. 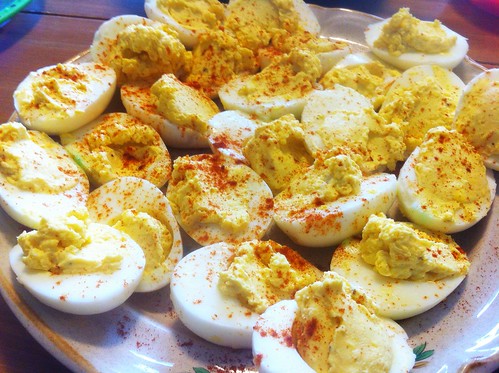 I made two dozen boiled eggs for the kids to dye (Fortunately Bella reminded me at the grocery store to buy white eggs for dying! I would have forgotten.) It still wasn’t enough. I want more deviled eggs. Mental note: make three dozen eggs next year.

I have more pictures of kids eating chocolate but I’ll have to put them up tomorrow. Now it is time for this tired mama to get to bed. I’m still recovering from the Easter Vigil and the subsequent kids who are all off their schedules and not sleeping well.