He Is Risen! Alleluia! 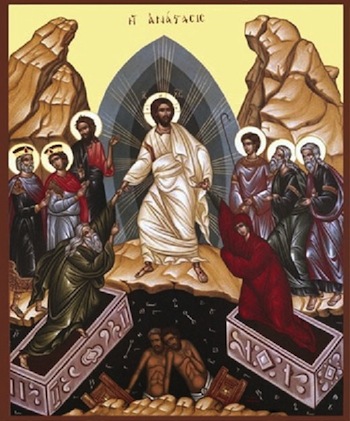 Well we survived Easter vigil with four kids. Though not without Anthony falling and cutting his mouth on the edge of the pew right at the beginning of Father’s homily, occasioning a humorous aside from Father chastising Anthony for anticipating the punchline of the joke he was telling. And Sophie waking up at the end of Mass disoriented and beginning to scream because I wasn’t there but in the back of the church with Anthony who for some reason was only attacking the front of my shirt looking for milk when we were in the pew but stopped while I walked with him out back. Bella and Sophie glowed through the procession and first readings but first Sophie and then Bella succumbed and by communion time both were sound asleep on the pew. Neither Anthony nor Ben slept a wink. And when we got home Ben didn’t want to sleep at all but had to have a snack and a story and then I had to sit with him in the dark until he fell asleep. So on the whole not the smoothest vigil even. Still, I loved every minute of it (Except the baby cutting his mouth and bleeding.) and do not at all regret going. Remind me of that again on Monday when they are all going crazy from two long days in a row and far too much sugar. At least I have a spiritual direction meeting on Monday. I have a feeling I’m going to need the hour out of the house. But it’s getting late and I’m rambling. Time to go to bed. Pictures tomorrow. Maybe. I have to get up early to cook lamb. Pictures sometime.

Meanwhile, I wish you all a very blessed Easter.