More pictures from last week. This time from a visit to the playground. Or was that the week before last? It is all a blur now. But I’m looking back in wonderment: Was it really that warm? Now it almost seems a dream. The kids in short sleeves and sitting on the ground eating bags of cheerios. 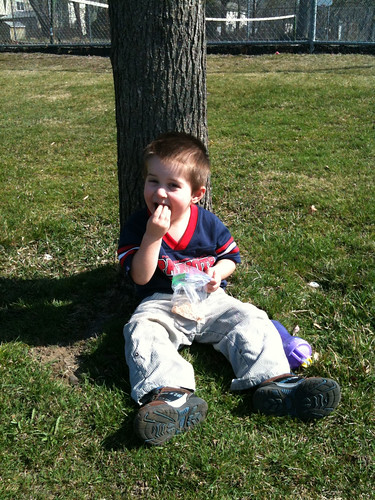 This morning Ben went out to watch all the activity on the street. The people across the street were having a new carpet installed.The next door neighbor was having her yard done. Thought it was about 40 degrees, Ben refused to put on his coat; but I figured he’d be back in when he got cold. So I let him go watch. After a bit the neighbor’s lawn guy came and knocked on the door asking if “this little guy without a coat” belonged to us. We assured him that we did know he was out and yes without a coat. And thanked him for his concern. An hour later one of the carpet installers came and knocked with the same mission. Yes, we know he’s out. Thank you for your concern.

I just finished reading Free Range Kids. Honestly, the book was a bit of a let down. It all seemed like basic common sense. Nothing revolutionary. I fully believe my kids should be spending their days wandering about in our yard and amusing themselves as best they can. I let the big kids out in the front. Ben has to let me know he’s out there but otherwise he needs no supervision. I trust that he knows not to go into the street or wander out of our yard. He just likes watching people and cars and trucks and can do it better outside. But it was funny to see how the scenarios in the book played out. Both the sense of hyper vigilance on the part of the workmen—a child on his own is a red flag in a world of helicopter parents—but also the basic decency of people who look out for kids and are concerned to make sure they are safe. 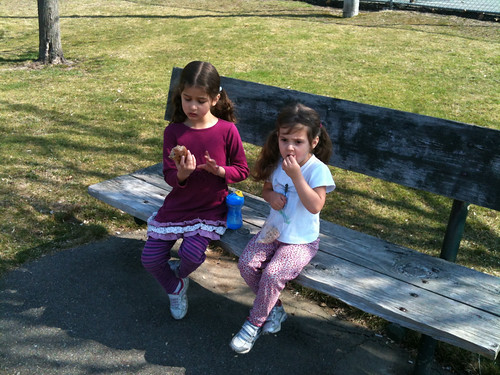 What happens when children are given free reign to entertain themselves without a need for parental supervision or entertainment that comes from a screen: This morning Ben and Sophie were being waiters. Sophie had a butterfly identification sheet that we got when we went to the Butterfly Place last summer. She was pretending it was a menu. I got a monarch cake with rice on top. The rice all melted because it was so hot. There were many other wonders as well.

While Sophie was still taking our orders (there was a boy’s side of the menu for Dom and a girl’s side for me) Ben came out of the bedroom with a toy hamburger patty balanced on a big book. Then he went back for more and then Sophie went back for even more. Sophie brought me a bunch of the various farm animals. Yum horse taco! For a while I was inundated with dishes. Then Ben came and asked if he could take something for me. And when I indicated that he could he then asked if I needed a box. (That boy pays attention!) He came back with the plastic sink from their play kitchen and I boxed up all my food and he cleared it back to the kitchen. 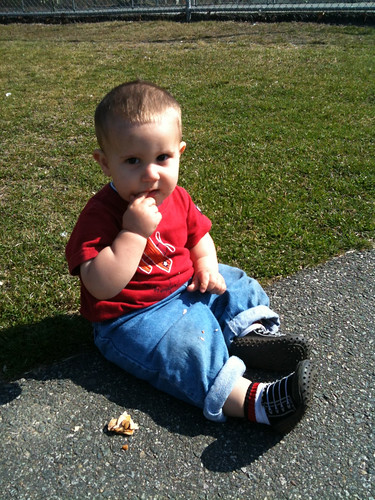 Sophie asked for the plastic statue of Mary that lives on the kitchen windowsill. Later I found Mary and a bunch of the animals and people in the big boat. Sophie told me that all the people had lost their mothers and fathers and Mary was taking care of them. Later Sophie and Bella were having a funeral for a priest. All the orphaned children and Mary were in attendance. I’m not sure who was saying the funeral if the priest was dead. 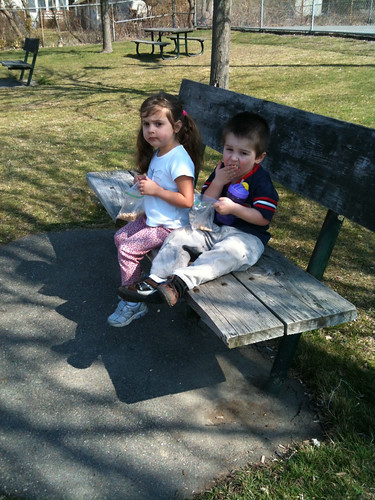 Bella has been playing Mother Teresa with her dolls. She’s taking care of the sick and dying, wrapping them tenderly in scarves. She’s been asking for the story about Mother Teresa in the Book of Virtues and then another picture book by Demi. I love to see how the books play out in her play.