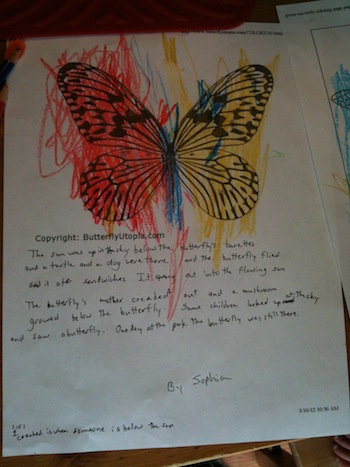 Sophie asked for a butterfly picture to color and she colored it “with one gold wing and one red wing and blue in the middle.” Then she asked my sister to write down her words:

*Creaked is when someone is below the sun.

Sophie wants me to add: “And there was a turtle too.”

Bella colored a butterfly too, hers was all sorts of colors. The girls cut out their butterflies and then made a garden with all the silk scarves for flowers. They spent the afternoon playing butterflies flitting in the garden, putting statues in the garden (little people and animals), and trying to keep Anthony from destroying the gardens.

Meanwhile I printed off a firetruck for Ben who colored it and had me cut it out for him and then he drove it around in the fireplace in preference to all his real cars and trucks.