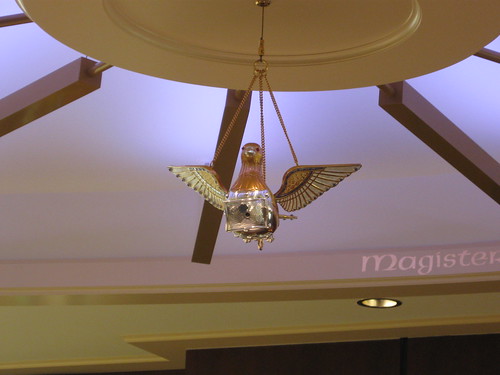 On Tuesday I was captivated by the verses from Psalm 55. Wednesday morning we went to Mass as a family at the Pastoral Center, where Dom works as is our custom on holy days. As I knelt before Mass my eyes were drawn to the beautiful Eucharistic Pyx in the shape of a dove that hangs over the altar in the Bethany Chapel. My heart leaped up: Oh that I had wings like a dove! Here indeed is the shelter my heart has been longing for. I’ve seen the dove many times before but yesterday it had a message for me.

We stopped by the playground then then went home for lunch. Then I decided to try my hand at making some of this yummy looking fasting bread from Catholic Cuisine. It was a bit rocky, though. I decided to make half the recipe and was doing it in my head on the fly. I goofed and halved everything except the water. When it came time to knead the dough it was of course ridiculously wet. I was immediately wrist-deep in dough and I had to call Bella over to scoop more and more flour onto the dough. It wasn’t until she’d scooped more than a cup onto the dough that I finally realized what my error had been. Even though I ended up with a dough that had proportionately less salt and yeast than the recipe called for, I baked it up and it rose pretty well and tasted pretty good. Actually, it tasted amazing. And made for awesome tuna salad sandwiches. Even Dom who doesn’t like dried fruits like cranberries and currants in his bread raved about it. (Maybe a bit too awesome to feel really penitential?)

Anyway, we’re of into the desert of Lent. I’ve been keeping the computer off during the day and have noticed a difference already. I actually deleted the Facebook app from my iPhone so I am not tempted to check it at all. Fasting from food has been a bit harder. This is the first year since we’ve been married that I’ve even tried to fast. I started getting a headache on Wednesday afternoon and decided to eat a bit more nuts and cheese to prevent a migraine. I don’t think ending up with a massive headache that would land me in bed for the rest of the day would really be in the proper spirit of Lent.