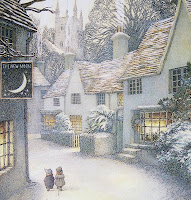 The Mole subsided forlornly on a tree-stump and tried to control himself, for he felt it surely coming. The sob he had fought with so long refused to be beaten. Up and up, it forced its way to the air, and then another and another, and others thick and fast; until poor Mole at last gave up the struggle and cried freely and helplessly and openly, now that he knew it was all over and he had lost what he could hardly be said to have found.

The Rat, astonished and dismayed at the violence of Mole’s paroxysm of grief, did not dare to speak for a while. At last he said, very quietly and sympathetically, “What it is, old fellow? Whatever can be the matter? Tell us your trouble, and let me see what I can do.”

Poor Mole found it so difficult to get any words out between the upheavals of his chest that followed one upon another so quickly and held back speech and choked it as it came.

The Rat stared straight in front of him, saying nothing, only patting Mole gently on the shoulder. After a time he muttered gloomily, “I see it all now! What a pig U have been! A pig—that’s me! Just a pig—a plain pig!”

H waited till Mole’s sobs became gradually less stormy and more rhythmical; he waited until at least sniffs were frequent and sobs only intermittent. Then he rose from his seat, and remarking carelessly, “Well, now we’d really better be getting on, old chap! set off up the road again, over the toilsome way they had come.

While putting together my retrospective post for my blogiversary, I stumbled across a comment in an old blog post that recommended a parenting book,
Tears and Tantrums: What to Do When Babies and Children Cry

by Althea Solter. For whatever reason—I was busy, distracted, overwhelmed with an already towering reading pile?—that recommendation didn’t really register on my consciousness at the time and I never followed up on it nor until I re-read the comment last week did I remember that it had been made. But now it caught my eye and I decided to get it from the library. And oh I am glad I did. Sometimes the right bit of information at the right time catches just right and suddenly the world shifts and everything realigns and you are able to see clearly for the first time a new path where before there had only been a close thicket. This was rather like that.

The author’s thesis is simple: that tears and tantrums are the natural, healthy way of relieving stress and that when children are allowed to cry the recover from stress and from psychological traumas, both big and small, more readily. When crying is suppressed or denied children will find ways to cope, of course, but there will be repercussions in other ways as the stress is bottled up.

In general her theory makes sense to me, although I’m a bit leery of her theories about birth trauma and rebirthing. It’s the kind of thing that takes a truth I already know—that crying is a stress relief—and shows me how that truth can change how I approach certain moments in parenting. I think that keeping this truth in mind, that crying and tantrums help children resolve stress, will help me to be more patient with tears. Whereas before I was seeing them as something I need to fix, now instead of seeing my job as keeping them from crying, it is so much less of a burden to have my job be to merely be with them as they cry, so that they are not alone as they work through whatever emotions are overwhelming them.

But what is truly revolutionary is how it’s changed the whole matter of putting the baby down to sleep. I have been uncomfortable with nursing the baby to sleep, knowing that it is a poor soothing tool because when the baby wakes up he wants to nurse again, to recreate the situation in which he fell asleep. But the only alternative I knew f was the method of letting a baby cry it out, and that appealed to me even less. So there I was nursing Anthony to sleep and then nursing him down again and again for an ever increasing number of night wake ups. I didn’t like it but I didn’t know how to get him to sleep otherwise without abandoning him to cry alone in the dark. Solter’s solution is so simple and obvious I feel rather foolish for never thinking of it. She advocates that once the baby’s needs for food and dry diaper have been met, that you should simply hold the tired baby and letting him cry himself into a deep sleep. Oh! I can do that. In fact, Dom had already been doing that on the occasions when I couldn’t get Anthony to nurse to sleep. It’s just that Dom has less patience for screaming babies and so we never thought of it as a real solution to the bedtime dilemma. It makes sense too because often Anthony cries himself to sleep in his carseat while we are out and about. It isn’t very loud crying, just a soft kind of creaky moan that he seems to need to do to release tension and fall asleep. We’d already labeled that particular sound as Anthony’s sleepy creak and noted that Ben had done the same thing.

So for the last few nights I’ve nursed Anthony as we say prayers and read bedtime stories. Then after the other kids are tucked into bed I have taken Anthony to our room and held him in my lap while sitting on our bed. Every single night he has cried and writhed around for about five or ten minutes and then eventually found a comfy position, either on my lap or on the bed right next to me and gone to sleep. Every time his cries were not loud angry cries or hungry cries, they were most definitely the sleepy moaning cry that I’ve heard from the car seat so many times. I knew as soon as I heard that cry the first night that we were on the right track. Sure enough it takes less time for him to cry himself to sleep than it did for him to nurse himself to sleep. I sit with him until he’s deeply asleep and then move him to his bed. He’s been sleeping for hours every night and then waking up only twice in the night. I have been nursing him back to sleep at those wake ups because it is easier than letting him cry and he does seem to go back to sleep pretty deeply and let me put him back into his bed after the first middle of the night waking. After the second one he’s been staying in our bed until morning. This is a huge improvement over his previous pattern where he woke at least once before I was ready to go to bed and then woke again shortly after I went to bed and then almost always spent the rest of the night in our bed, nursing several times.

I really wish I’d read this book a long time ago when Bella was a baby. It would have changed my approach to so many things and I think would have helped me be more patient during various tantrums and fussy stages. It’s funny because nothing in it is really completely new to me but the way it introduces the topics was exactly the paradigm shift that I needed.

The bit about Mole and Rat seemed too perfect when I read it to Bella this afternoon not to include. My aim is to be able to be as sympathetic as Rat is and as willing to acknowledge when I have been piggish and failed to listen and to be compassionate to a poor sad little one who has as hard a time as Mole at expressing a need.