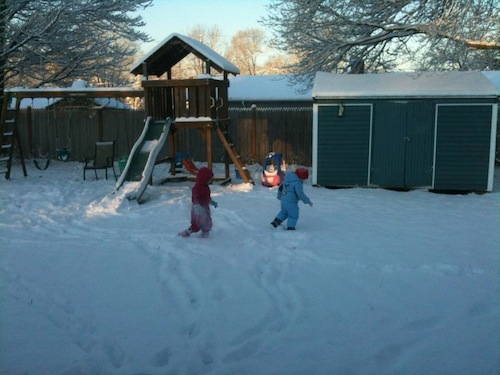 Today The Wine Dark Sea turns seven. I wanted to write some kind of super post commemorating this historic day, but Ben was up half a dozen times in the night, Sophie was up about four times. Anthony, well, the night before last he was awake and howling from about 1 till about 5, so last night seemed good in comparison. I had to dose him with gas drops every time he woke to nurse because I gave into weakness and had BBQ beans for dinner; but he mostly slept with just one episode of fussing that ended with him stretched out on the bed beside me, feet in my back and head at Dom’s belly.

And all the kids were up at 5:45 and wanting to put on their snowsuits to go explore. Yes, we actually got several inches of snow. I told them they had to wait till the sun rose and they had to have breakfast first. And clean up the blocks, cans, and plastic containers that were strewn across the laundry room last night courtesy of Anthony that everyone was too tired to clean up at bedtime.

When I finally got them all suited up and outside in the sunny yard frolicking in the snow (with Anthony sitting by the back door happily playing with some of the snow that had been tracked in) I retired to the bathroom for a few minutes. Then all hell broke loose as Ben fell face down in the snow and lost his mitten and stood at the backdoor wailing to be let in and Dom, who wasn’t dressed yet, having showered after shoveling the driveway, standing at the back door trying to console him and yelling for me to hurry up.

Less than five minutes. That’s how much time they spent out in the snow. But they still had to have hot cocoa when they came in. And then Ben cried for about forty-five minutes before he consented to let me read him some books.

Now we are seven. Life looks so different than it did in the first days of this blog when I wrote about Walking through Salem on a Snowy Evening with my boyfriend or contemplating the view from my office. And now I must go prevent Anthony from pulling over the television… so it goes.