Chanting the Psalms
Add comment
Share:FacebookTwitter
FaithLiturgy of the HoursPrayer 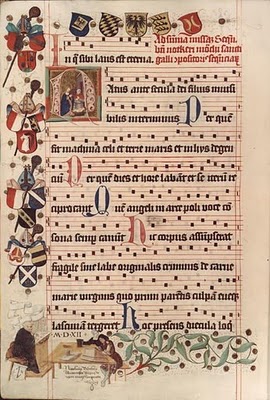 I don’t listen to the Divine Office podcast very often; but I have the app on my phone and sometimes when I can’t find a chunk of time to sit and pray I can at least listen to the office on the go. The other night, for example, my sister put on Evening Prayer while I was coking dinner. Although I only heard about 80% of it because of interrupting kids, still it was very nice to be able to pray while I worked.

But this morning it was a special treat. I played the podcast on my phone as I got myself and the children dressed for Mass and was very pleasantly surprised to hear them chanting the psalms instead of the usual recitation. This is how the psalms are meant to be heard! I’m guessing that they only do it for Sunday’s office because I’ve never heard it before; but perhaps someday they may move to chanting all the hours? I can hope.

Daria has been writing about chanting the psalms over at her blog. As I told her, I’ve been wanting to learn to chant the psalms for a long time; but I don’t read music and don’t think I’m likely to learn anytime soon. I know musical people tell me it’s not that hard to learn to read chant notation; but I just don’t think it’s something I’m going to be able to pick up. The beauty of chant is suppose d to be that you don’t have to be musically trained in order to learn it. I think I could learn the chants by ear if I heard them often enough. So here’s hoping that more resources become available for people like me .