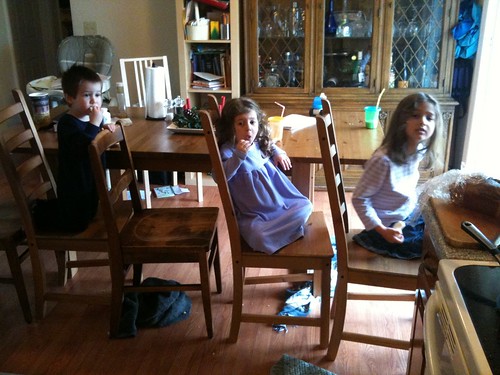 All aboard the breakfast train!

It’s been a long weekend—a good weekend; but long. and it’s not really over because Dom is taking the day off today. I had a quick takes post all done and ready to be published Saturday night but my computer ate it. So I’m just going to skip ahead and try to recap the whole weekend from Friday on in one massive omnibus post.

On Friday I had some last-minute Epiphany shopping to do. Santa brings the kids each a book or two and a couple of toys. Then Mom and Dad and Grandma and Grandad (my parents) give them gifts at Epiphany. So I asked my sister to watch the big kids and I took Anthony with me and we hit a bunch of different stores. Most of the time with all four kids I only ever make one stop. Two very short ones at most. With the exigencies of meals and nap times and nursing and the added time of getting four little people ready and four little people in and out of car seats anything else just becomes unwieldy. So it was a treat just getting to go to places I don’t usually have time for and to only have one little body to buckle and unbuckle. We ended up at the mall that is right near Dom’s work so I called him up and asked him if he had lunch plans. He didn’t and so after Anthony and I had run our errands we met Dom at the nearby sushi buffet. 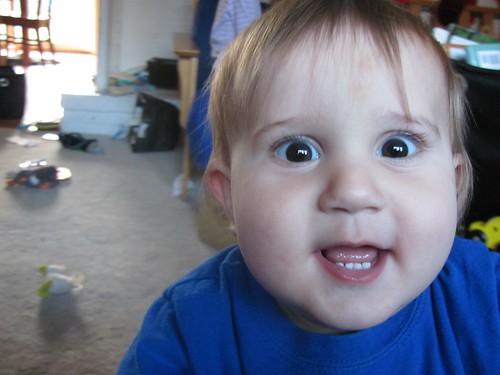 Yes, I had a real lunch date with my husband. Anthony is so quiet and calm that it was almost as if the two of us were alone. We were able to have real conversation without interruptions and not having to talk over the babble and giggles of three energetic preschoolers. I stuffed myself with miso soup and sushi and udon noodles and sesame chicken. Oh yum! 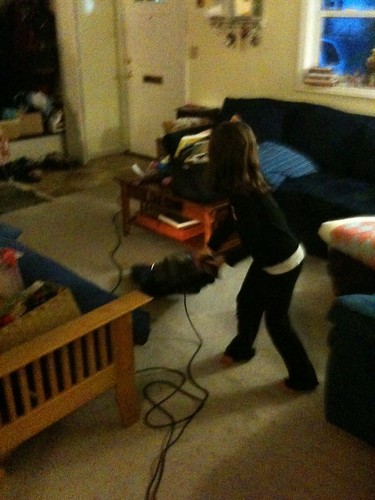 On Friday evening Bella surprised me by announcing that she wanted to learn how to vacuum. To understand how incredible this is, you have to understand how much Bella used to hate, loathe, and abhor the vacuum. She used to burst into hysterical tears when I turned it on. As a toddler she’d run from the room and slam the door behind her. Even as recently as a few months ago she’d go to her room and shut the door when I ran it. And now she’d decided she wanted to run it. I thought it was probably too heavy for her; but if she was so eager I was willing to let her have a go. Amazingly, once I’d plugged it in and showed her how to work it, she did a wonderful job, even moving boxes and lifting the rug to vacuum under them. It was a dream come true. 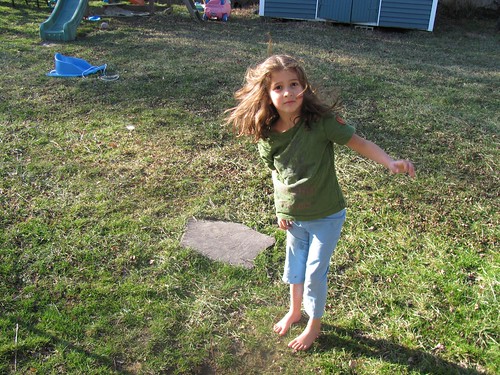 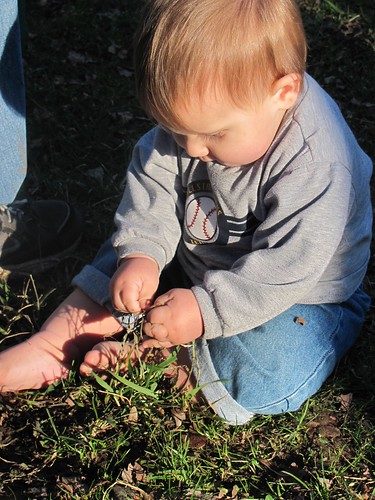 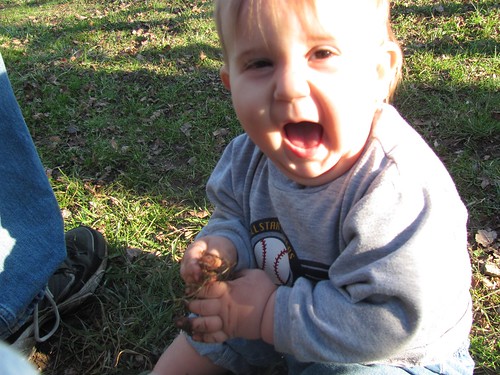 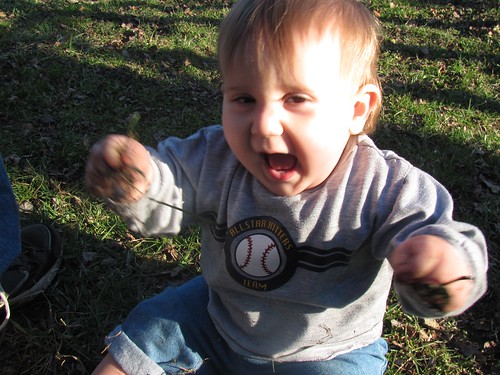 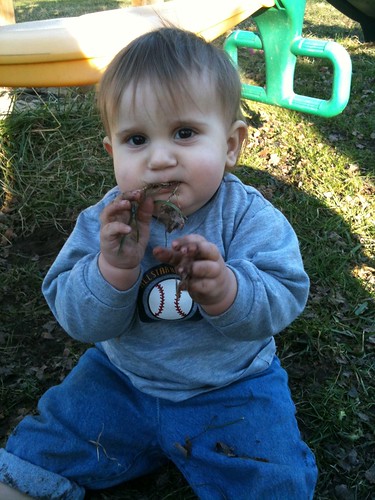 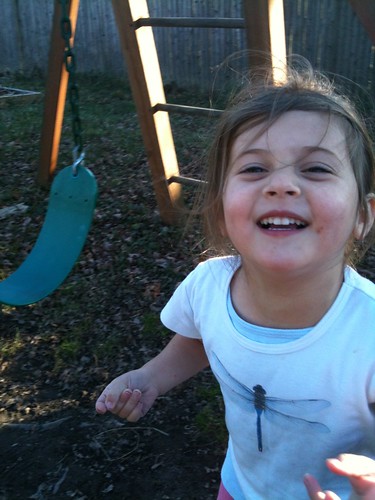 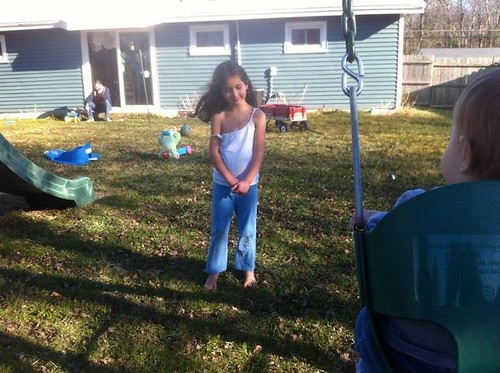 Bella, stripped to her undershirt because she got overheated while running around. January 7 folks! The only way you can tell this is winter is the lengths of the shadows at 2 pm.

On Saturday the weather was like summer. 61 degrees! The girls were running around in the backyard barefoot and in short sleeves. Dom pushed Anthony and Sophie in the swings and I sat on the back step and chatted with my parents on the phone. Then we let Anthony crawl around on the grass. He was so gleeful to be outside and mobile. He shrieked and clapped, lifted fistfuls of leaves and grass in his fists and even shoved some into his mouth. After he’d sat and explored for twenty minutes or so he began to crawl around. There was something so determined, almost manic, in his head-down rush through the grass, crackling dried leaves under his hands and knees. He was muddy and cold but happy when he finally gave in and crawled over to be picked up. Poor Ben napped through the whole backyard extravaganza. By the time he woke everyone had come in and the sun was setting. 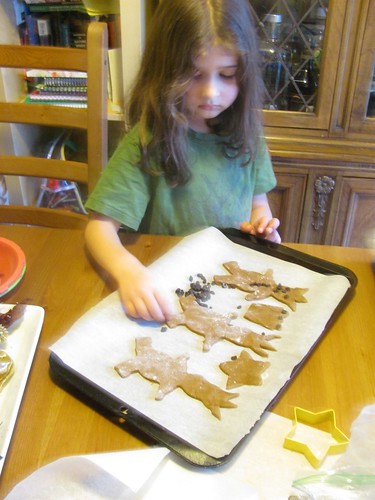 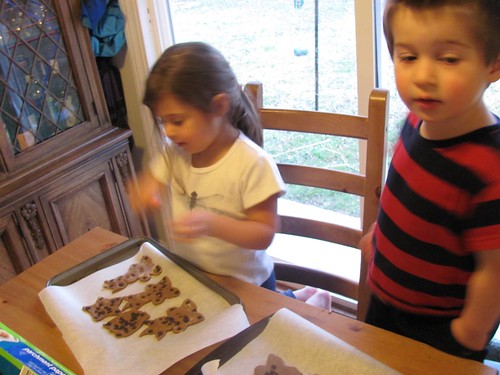 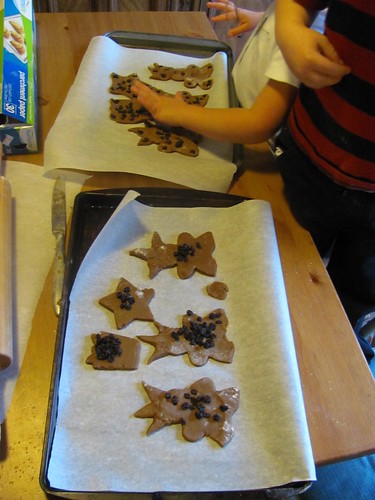 Also on Saturday the kids asked to make gingerbread men and so I had a flash of inspiration and decided we could make gingerbread kings in honor of the feast of Epiphany. We cut out gingerbread men and then I stuck on points to the tops of their heads to make crowns of a sort. Good enough for my crew. They each got three kings plus a star and a present to decorate with currants. Ben later decided he didn’t like the strong tasting cookies but the girls were very pleased with their creations. 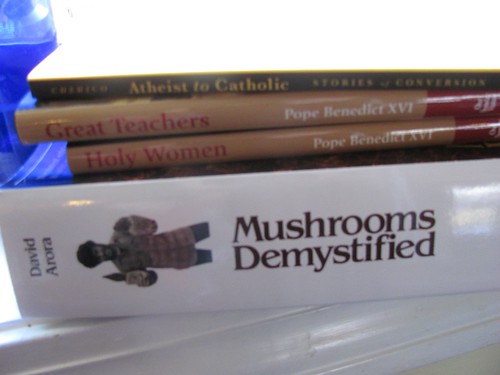 My stash of new books.

Today we got up and went to Mass and then came home to open presents. There was a big pile from Dom and I and another huge pile of Amazon boxes from my parents. I wish I’d got pictures but I didn’t. The kids mostly got books. The only exception was a twin sized quilt for Sophie who keeps waking up several times every night wanting her blankets tucked over her again. We’re hoping a big quilt will be easier for her to put back on for herself and maybe we’ll get more sleep. Also, Ben and Anthony got a toy tug boat for the bath tub. I’ll post book lists later of these plus the books they got at Christmas. 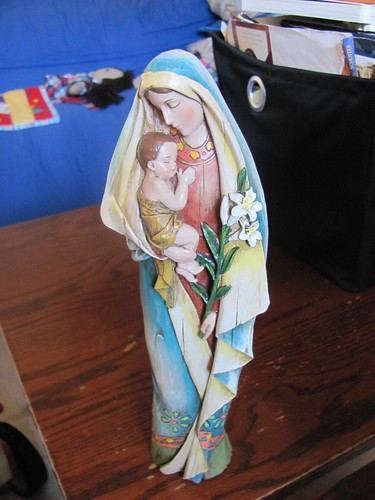 Dom got me a couple of books plus a beautiful statue of Mary and baby Jesus that I’d put on my wishlist. My mom gave me more books and a pair of down-filled slippers and some smart touch gloves. They’re knit with some kind of metal threads so that all ten fingers can be used with my iPhone. So cool! I gave Dom a new baseball cap—he’s been wanting one—plus a knit winter cap with a Patriots logo that was on sale at the store where I got the ball cap. It is handy when husbands tell you exactly what they want and where to get it. My sister got a set of Father Barron’s Catholicism dvds. We all watched the first episode and part of a second. Wow! They are really spectacular. I’ll probably be writing more about them. 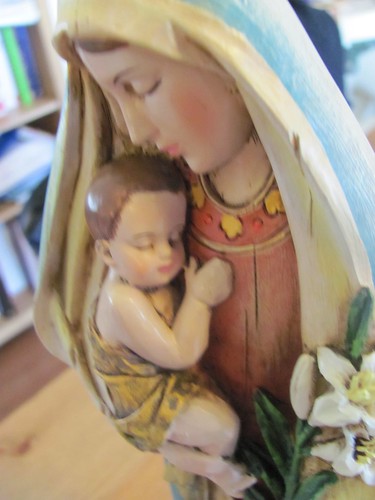 I love how Jesus is nestled against Mary’s shoulder.

We did a video chat with my parents and brothers (and my brother Tim’s finace). Not much communication happened, in fact I ended up with a headache. But the kids love to see everyone and everyone loves to see the kids so it’s worth the chaos.

Then tonight we went out for dinner because I’d neglected to buy anything special for today and no one really wanted chicken and no one felt like cooking anyway. We went to this fabulous Indian/Nepalese restaurant called Fishtail that just opened near us. So very good. A little odd that they had a huge copy of a Winslow Homer piece as a mural on one wall. The food was really some of the best I’ve had. The kids survived on rice, naan, and tandoori chicken. They also really liked the rice pudding dessert. Anthony mostly had Cheerios but also gnawed on a piece of naan. It felt kind of appropriate, after all the kings did come from the East. Certainly it was festive and made it feel like a real holiday. When the girls are old enough to really help int he kitchen then it might be a treat to have big, home-cooked meals on holidays but right now it’s just not something I can pull off.

I think that this year the one resolution I am going to make it to learn how to be realistic about what I can and can’t do with four children under six. I have all these lofty ideas and ambitions but the reality is that I just don’t have all that much free time. My life is one long series of interruptions and everything takes a back seat to making sure the children are fed and clothed and the household reasonably maintained. Schooling Bella is something that happens when I think about it—though the girl is sharp as can be and is always learning even if we’re not doing formal lessons. I’m learning to make a sort of truce with chaos and mess and never really getting the house to a satisfactory level of clean and tidy. I’m learning to make a sort of truce with the fact that I can’t spend as much time being a creative cook, doing crafty projects with the kids, sewing, reading, playing, napping, or any one of a number of other things I wish I was doing more of. This is life right now and it’s not going to change. I need to find the right balance still, but I’m starting to recognize my need to make much more sever compromises than I’d ever thought I’d find myself making. And I suppose that is a part of the adventure of motherhood. 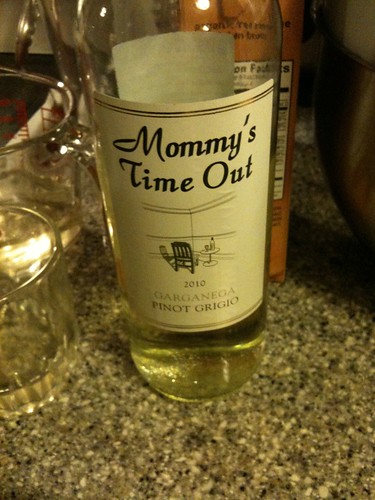 At least I can drink a little wine, beer, or port now and then. And lace my cocoa with a bit of amaretto or kahlua.

Today was a rather hard day. I forgot last night that mulligatawny soup has lentils in it. Lentils and beans are not friendly to my dear Anthony. I’ve had to remove them from my diet completely while he’s nursing. Even though I really like beans, I do not like having a baby who screams for hours in the middle of the night and writhes and kicks my stomach black and blue. Oh no I do not like it at all. Poor little fellow was so so miserable. And once I realized what the problem was I felt so bad. Evidently Anthony does not know that beans are good and cheap. Nope, no beans for me until he weans. Thank God Dom was home today. It meant I got a little tiny nap with Anthony (he wouldn’t sleep unless I was lying down with him.) And it means things didn’t fall apart completely. Dom made dinner and cleaned up after accidents and helped keep cranky kids in line.

Today we also took down the tree and removed the wreath from the front door and boxed up all the ornaments and decorations. The house feels sad. I think this week I need to give everything a good cleaning to lift my spirits. Still, I suppose in a way it’s nice not to have the packing up looming over me as one more task to be done. And I’m grateful to Dom for doing the bulk of the tree un-trimming. And now back to ordinary time. Goodbye, Christmas, it feels like we hardly knew you this year. 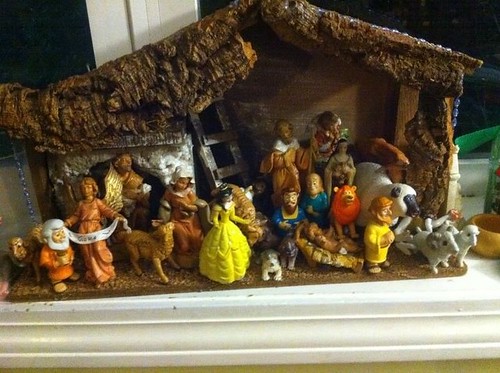 Sophie says everyone is having Midnight Mass in the stable. I’m going to miss the antics of the stable.