The Reason for Bridal Showers 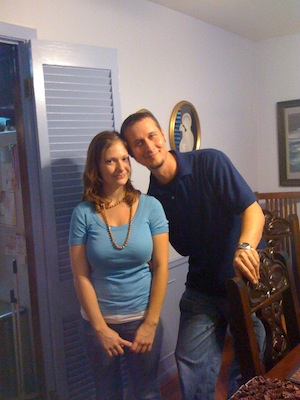 As I mentioned before, my little brother recently got engaged. He and his fiance just set a date for the wedding, next September. (Yay!) After the excitement died down a bit and as I had time to start thinking through all the steps they will be going through as they plan their wedding, it occurred to me that Theresa and I will most likely be invited to the bridal shower—after all Dom’s sisters (and his mother and his aunts) came to mine. And I was almost surprised at how much I wanted to be able to go. I mentioned it to Dom and he was very surprised that I was seriously thinking about attending at great inconvenience to him and to the kids.

Likewise, Theresa mentioned to Tim that we would both make a serious effort to attend and he was also very surprised. (Though he said something to the effect that all the women were evidently on the same page.) He’d just assumed it would be too much hassle and bother what with all the kids and all.  He was relieved to find that he and Dom were on the same page in being surprised and a bit befuddled.

So I’ve been pondering why I feel it is so important to disrupt my schedule and the kid’s schedule and Dom’s schedule and make every effort to get to the bridal shower, which will presumably be in Texas. And the short answer is because Amber isn’t just marrying Tim, she’s becoming my sister. The longer answer is that it isn’t enough to get to know just Amber. Who she is is also a part of a web of relationships, her family and friends. They will be Tim’s family and by extension they will be connected to us. And those relationships matter. And though some feminists would scoff at my gender-distinction, it is clear from our various reactions that that web of relationships does matter more to women than to men. To really know each other, we need to know each other’s families and friends.

Weddings bind not just individuals but communities. They create bonds, fine filament threads that connect us to distant strangers. In the past six years I’ve come to know and love not just Dom’s mother and sisters and aunts but also my sister-in-laws’ mothers and sisters and sisters-in-law. Dom’s brother’s wife’s mother and sisters. Dom’s sister’s mother-in-law and sisters-in-law. These are the women I meet at Christmas and Easter and Thanksgiving and kids’ birthday parties. We might not have a direct relationship but we are related and we know each other and make small talk with each other and ask about each other’s families as we stand around in the kitchen or we watch our children playing together.

A perfect example of that was yesterday’s Christmas celebration at Dom’s brother’s house. My sister spent her Christmas with us and therefore with my in-laws. They all know her and love her and welcomed her as one of the family. Indeed she is one of the family. But she’d never met any of those family members until she flew to Massachusetts for my shower.

So, yes, I want to meet Amber’s mother and relatives and her best friends. I want to meet them not as passing strangers at the wedding feast but as something more. I used to think bridal showers were about presents but now I see that the presents are really just a pretext. We go through this ritual get-to-know you event called the bridal shower (and also the secondary event of the rehearsal dinner) because the focus on the day of the wedding is on the couple and on celebration and because the day of the wedding is too busy for doing the hard work of community building.