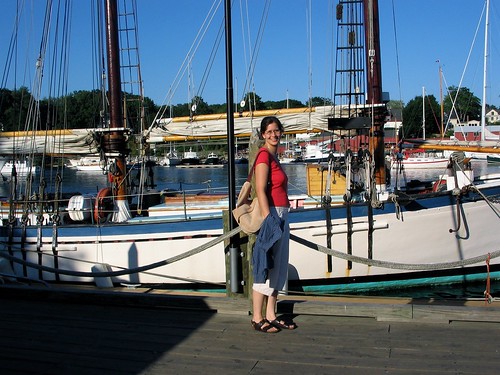 In Bar Harbor, Maine on the first night of our honeymoon.

Hallie is collecting honeymoon stories. I’ve never written about ours, I don’t think. I wasn’t blogging so much back then. So I thought it would be fun to take this excuse to tramp down memory lane. I’ve been flipping through our photos and there are far too many to share here. But I can at least give a little flavor of our trip. 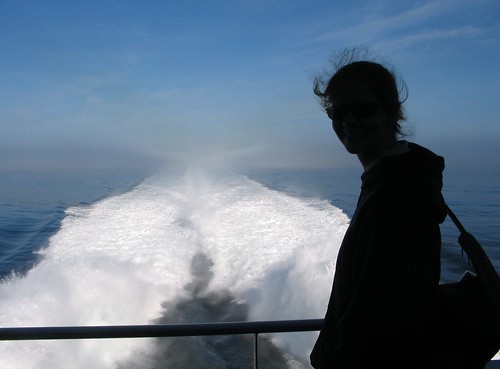 On the Cat, headed for Nova Scotia.

We were married on Saturday August 13 we decided to postpone leaving for our honeymoon until after Mass on Monday, which if you’ll recall was the feast of the Assumption and thus a holy day of obligation. I think having a delayed start was one of our best ideas. We had friends and family over for brunch after Sunday’s Mass and then spent the day being lazy and packing. On Monday we also met some of my visiting family members for brunch after Mass. Then we took the car in for an oil change before we hit the road. (The guys at Jiffy Lube remembered us a year later because of our decked out car.) 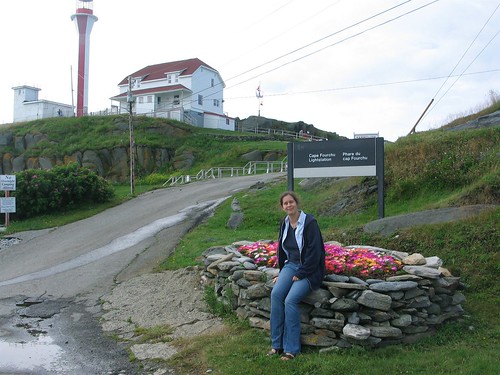 We didn’t have far to drive the first day. We spent the night in Bar Harbor, Maine and in the morning we took the Cat Ferry to Yarmouth, Nova Scotia. The Cat is a super fast ferry and was a fun way to travel. 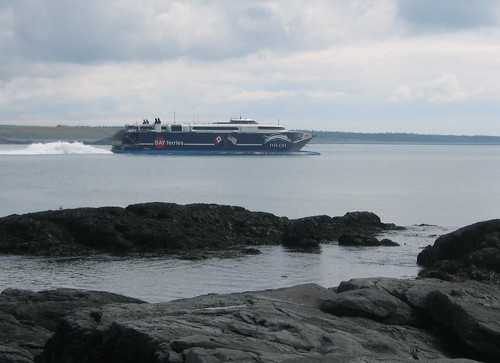 The Cat headed back to Maine after dropping us in Nova Scotia.

A driving honeymoon wouldn’t be everyone’s speed; but for us it was perfect. We had an itinerary all mapped out. We’d booked it all through a travel agent and so had places to stay for each night, so it wasn’t quite as spontaneous as my usual taste. But for a honeymoon I think it was good not to have to worry about finding places to stay. And we got some great deals at the package rate on some very nice places we might not have been able to afford otherwise. Most of all it was good to have hours in the car each day to talk and talk and talk. Dom recently wrote about how we miss the talks we used to have. 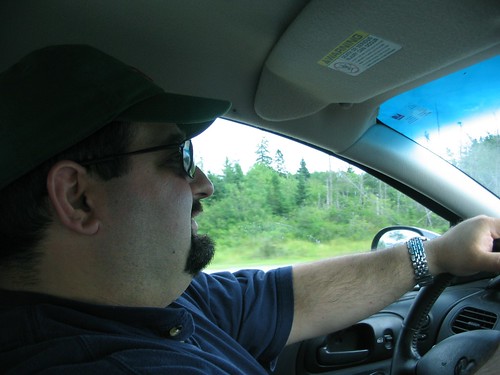 Dom in the driver’s seat. I don’t think I got behind the wheel once on this trip, though I did offer. That’s pretty much been the pattern in our relationship: he drives, I ride. It’s kind of nice.

Nova Scotia/PEI was a perfect destination for us. Neither of us had ever been there (well, Dom visited Nova Scotia with his family when he was very little) and so it was all new territory to explore. There was plenty to see and do and yet not a great deal of pressure to see or do any particular things. We missed out on plenty. I could have spent weeks poking about in all the little towns. But what we did see we enjoyed. 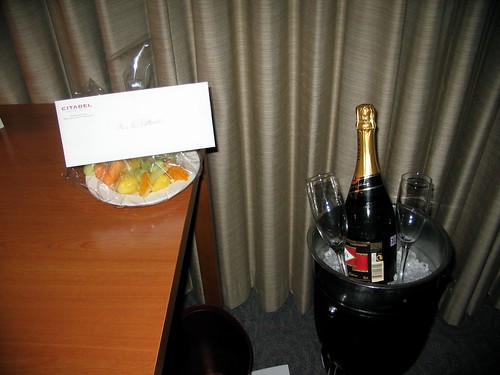 Our warm welcome at the hotel in Halifax.

Our second night we spent in Halifax at the Citadel Hotel. We found that the travel agent had told them we were honeymooners and we’d been upgraded for free. There was a nice fruit plate and a bottle of champagne waiting for us in our room. We went out for sushi and then came back early before we’d had a chance to wander the town as we’d planned because I had a sudden onset of red, extremely irritated eyes and had to remove my contacts. It took me several days before I realized that I was allergic to the very soap I’d been using to wash my face. I love the smell of mint but it is not my friend when it is in my skin care products. We had fun making an early night of it with our complimentary bottle, though. We forgot that the clocks were an hour different and so we awakened when room service delivered the breakfast we’d ordered the night before. Oops. 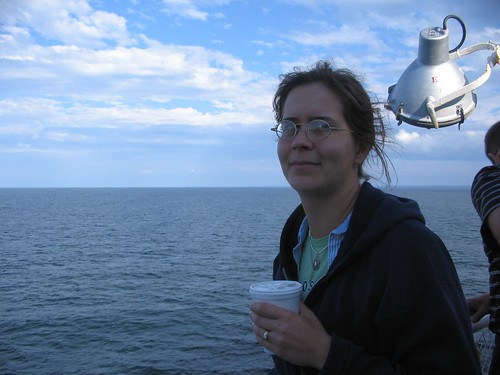 Sipping hot cocoa on the ferry headed to Prince Edward Island. I later spilled my cocoa on my shirt.

We explored Halifax in the morning and then drove north to catch the ferry to Prince Edward Island The ferry was wonderful except that when we went to get back into our car I stumbled and bashed my leg on a trailer hitch. A greasy trailer hitch that smeared my favorite capris with black gunk and left a huge bruise on my leg. (I’d almost forgotten that bit but Dom reminded me.) 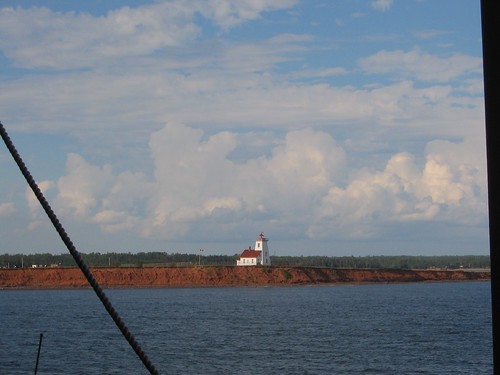 Our first glimpse of PEI.

Fellow lovers of Anne and all things L.M. Montgomery, PEI was all I’d ever imagined and even better. From the first glimpse of the lovely red bluffs, I felt I’d walked into a dream. Can you imagine anything dreamier than to visit the real Green Gables on your honeymoon? Maybe walking down the real Lover’s Lane? 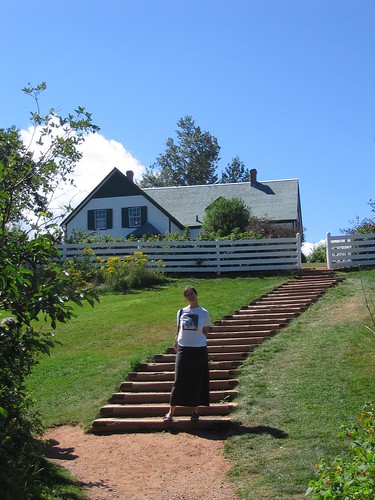 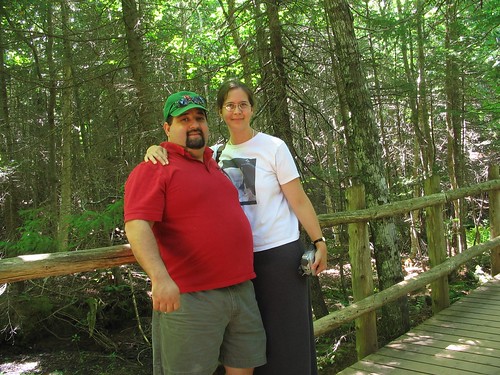 Dom was very sweet to indulge my Anne swooning. I was sure to let him do things he’d enjoy too. Like have PEI mussels at almost every meal. The food was so amazing! 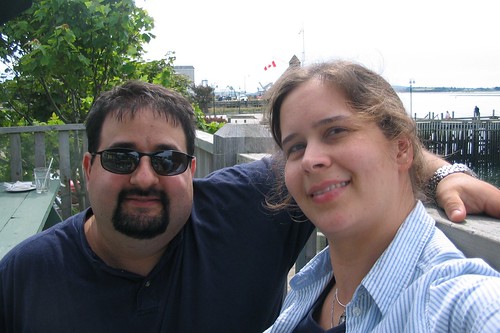 One of many al fresco meals.

We took a romantic walk on the beach where the sands were a lovely shade of red. 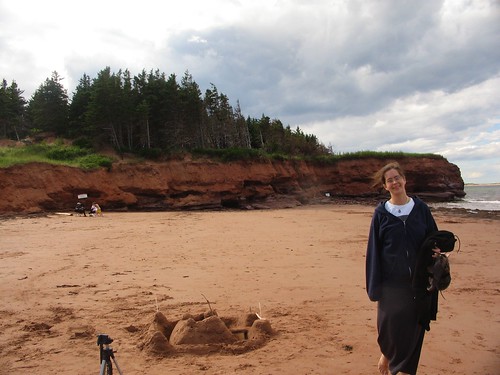 On the beach in PEI. Isn’t it gorgeous? My inner Anne was swooning. 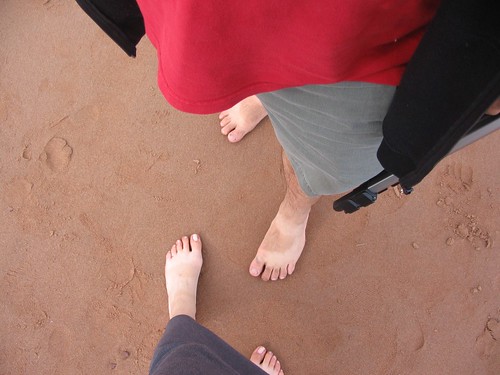 I don’t know why I love this picture of our feet on the beach as much as I do.

We were only in PEI two nights. Far too short. But we did have a lovely time. A rainbow greeted us at dinner in Charlottetown. And there was live music too. Another amazing seafood dinner. 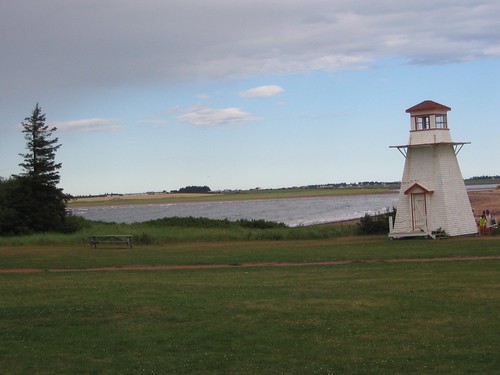 We came to PEI via the ferry; but left via the bridge to New Brunswick, thus giving me a sixth Canadian province that I can claim to have visited. After hours and hours of driving through Canadian forests I am much less worried about worldwide deforestation, let me tell you. There is plenty of wilderness left up there. 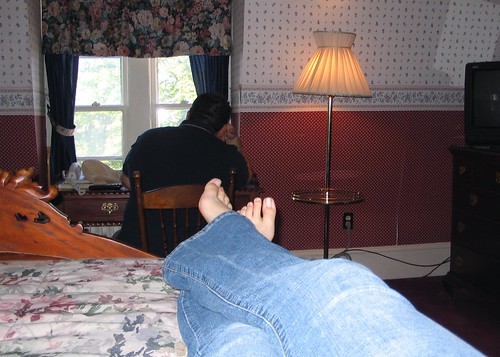 In our room at the Blomidon Inn. I rested while Dom checked his email. At that time he was the connected one, me not so much.

We returned to Nova Scotia and drove to Wolfville where we stayed in the gorgeous Blomidon Inn, my favorite accommodation of our trip. It wasn’t only the picturesque house and pretty frilly room; but also the food. The couple who ran the inn also ran a stellar dining room and it’s hard to remember a meal that impressed me more. All the vegetables were fresh and seasonal from their own garden… oh we had the most amazing food! 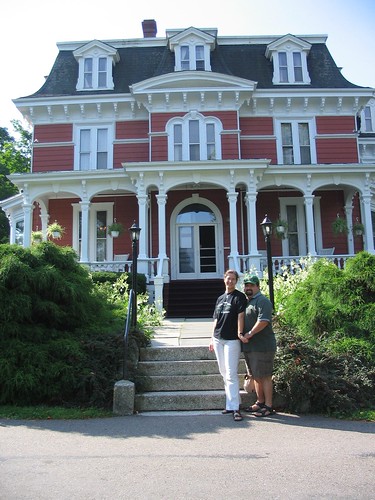 We visited Domain de Grand Pre. Who knew there were vineyards in Nova Scotia? We bought a bunch of wines from them. So very good. Wish we could get more; but I don’t think they export. 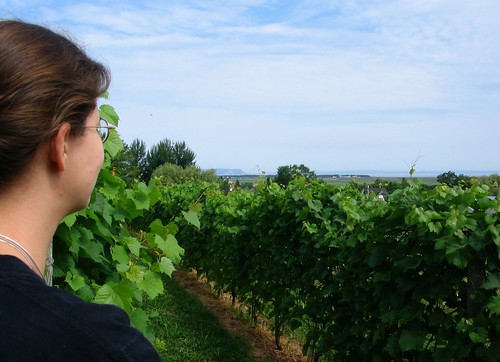 We also paid a visit to the Grand Pre national historic site. Dom had Acadian ancestors on his mother’s side who lived in and were expelled from Grand Pre. I didn’t know much about Acadian history so it was a fascinating introduction. Hopefully some day we’ll be able to take our kids there so they can connect with that part of their heritage. 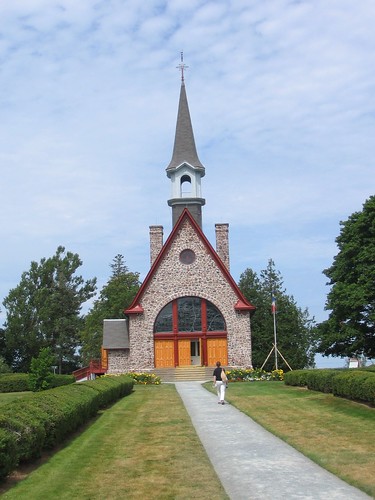 Our next stop was Annapolis Royal where we had fun exploring the historic fort and had our single mediocre meal of the entire trip, because the restaurant we chose was overbooked. Otherwise, I can’t remember much about it. 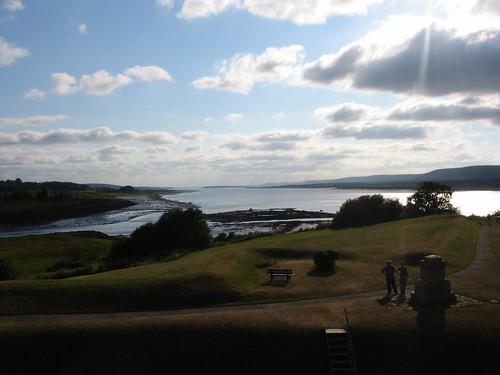 Our one major misstep when booking the trip with the travel agent was in not verifying that we’d be able to get to Mass on Sunday. There was no Catholic church in Annapolis Royal—we’d assumed that in Acadia we’d not have any problems finding a church—and we couldn’t find a church. And we were running out of gas, driving around in the middle of nowhere. And we had to get to Yarmouth and the ferry by noon. When we finally found a church, the largest wooden church in North America, we were afraid we wouldn’t have time to stay for Mass and still make the ferry. So in the end we went in, said a prayer, got a glare from the ladies at the front, and then read the Mass readings and prayers as we drove. 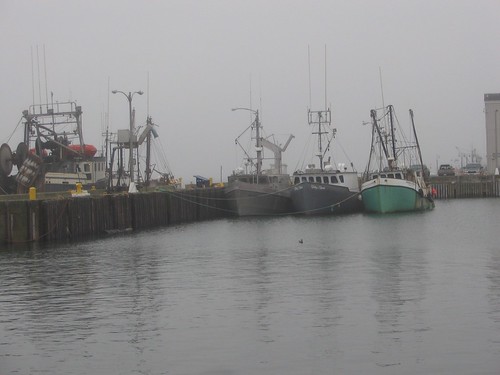 Waiting for the Cat in Yarmouth.

We did make the ferry. Then we stayed the night with Dom’s mother and sister at their house in Maine. Dom’s sister Evy and her family were there and we had fun hanging out with them, swimming in the pool, horseback riding (for Dom and others, I bowed out). 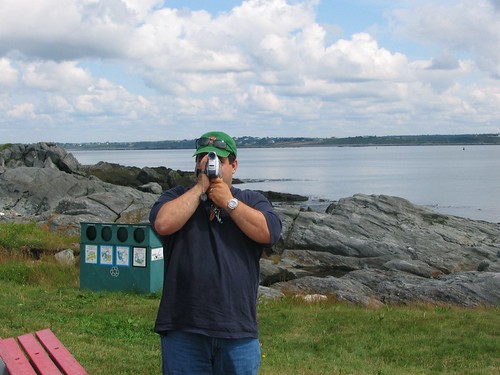 Dom with the video camera that broke and lost the footage of our wedding ceremony.

I have so much more I wanted to say about our honeymoon; but it’s taken me days to write even this much. I’ll have to let the photos tell most of the story, I guess. Dom did a write up of it right after we came back and you can read that if you want a little more.