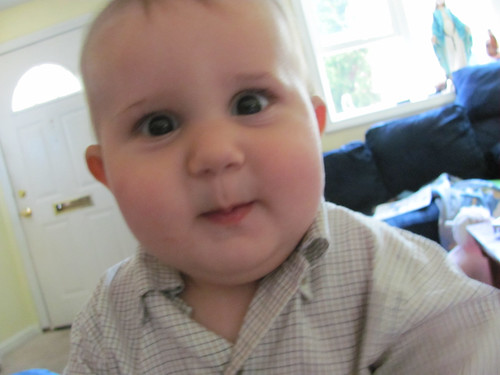 1. I’ve been trying to get this posted all day, but life has been crazy. I dropped Dom off at the airport last night. He’s heading to Kansas City for the Catholic New Media Conference. I wish I was going with him. Instead I drove home with Anthony screaming in the back seat for an hour.

On the way home I was pulled over by a state trooper. I was afraid I was speeding but it turns out he just wanted to make sure I had enough people for driving in the HOV lane. He seemed to think he’d already had the conversation with me before so I was a bit confused at first. I guess there’s another mom in a white minivan who looks like me. He said I should just point at the backseat since with the “tinted” windows he can’t see the kids. 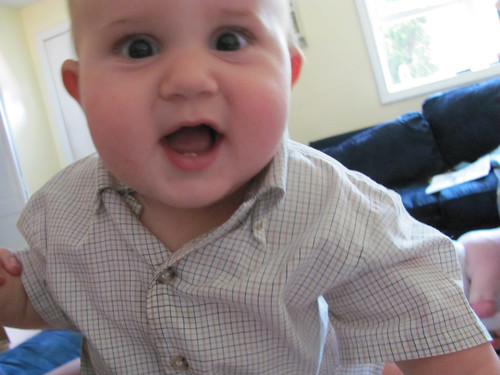 2. I was so shattered I stopped at Burger King for comfort food on the way home. And then Ben broke out in hives. He only had fries and milk. So was it the fries? Or not anything he ate at all? I’m calling the doctor anyway because he’s hardly been eating anything lately. All he had yesterday was some milk, a little yogurt, a tiny bit of banana bread, a nibble of a peanut butter sandwich, and the fries. I’ve already been fretting about whether he might have an undiagnosed food allergy that could explain the constant ear infections and the lack of appetite. 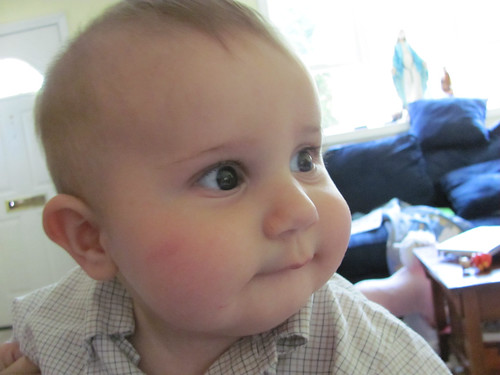 3. Did I mention how much I am going to miss my husband and how jealous I am that he got to go? I’m not sure which emotion is dominant. I’m just really afraid of Sunday morning. My sister had better feel up to going to Mass or I’m not sure I’ll be going either. 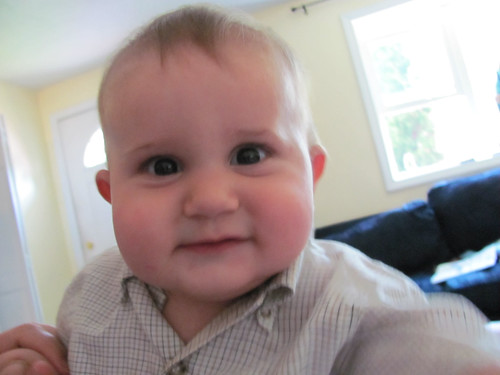 4. Speaking of Mass, Anthony just loves prayers. When we start the Our Father or Hail Mary he gets all excited. He slaps his hands up and down on his thighs, his face lights up like Christmas and oh you can tell he adores it. It is the cutest thing ever.

Then when I was trying to put him down for a nap the other day he was cranky, crying, unconsolable because of his teeth coming in. He’d nursed all he wanted and no amount of rocking or patting or singing was calming him a bit. But then I began to pray the Our Father and suddenly his crying eased a bit and he started to listen. I began a Hail Mary and he stopped crying altogether and he grabbed his blanket and stuck his thumb in his mouth. A few more prayers and he was out cold. A pious seven month old? Who knew. 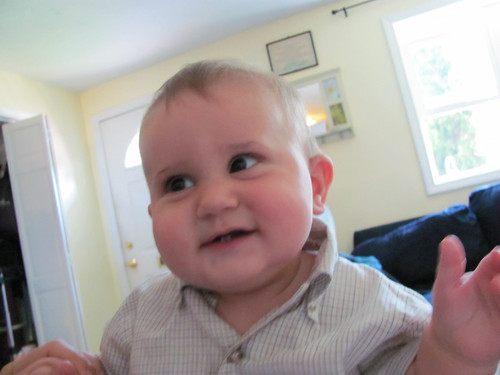 5. Bella has been trying so hard of late to be generous and helpful. Last weekend she tried to clean out the car. It didn’t look great but I was so grateful for her effort. Then on Friday afternoon she decided to help clean up the living room. “We’re making a desert,” she told me. She hates picking up toys; but I’ve never seen her work harder than she did that afternoon and it actually looked pretty clean to my eyes, not just to hers.

She loves her afternoon special cuddle time with Mama when we read a chapter in a book that’s just for her while Ben takes a nap. (So far Sophie hasn’t at all been jealous of this time but just lets Bella have it.) On Saturday morning I was so tired after a night full of interruptions from Ben, Sophie, and Anthony. I was snapping at Ben and so irritated and then Bella piped up out of the blue: “Mama, we don’t have to have our special cuddle time this afternoon. You can just take a nap.” 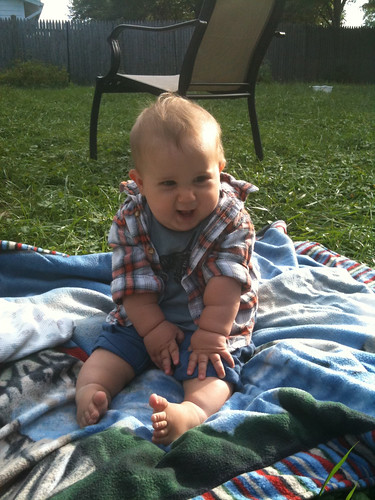 6. Ben sings “Uncle Donald had a farm….” It is the cutest thing ever. I just had to share that. 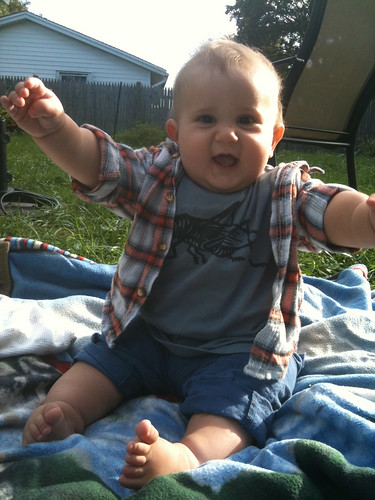 7. This morning’s great adventure: while taking a walk round the block we found a line of stuff down the middle of the road. A child’s backpack, sneakers, clothes, headphones, etc. And a huge bundle of papers: an itinerary for a family traveling to Walt Disney World today. A little three year-old girl is missing her new backpack, I think. I called a number from the itinerary and talked to half a dozen operators and finally left a message for them at the resort they’re staying at.

When he called me back the guy seemed to think their car had been broken into and the stuff taken. How terrible. I’m so glad I was able to rescue the stuff and give them some peace of mind.

It was also kind of fun sleuthing my way to a solution to the mystery. I felt all Encyclopedia Brown for a little bit. 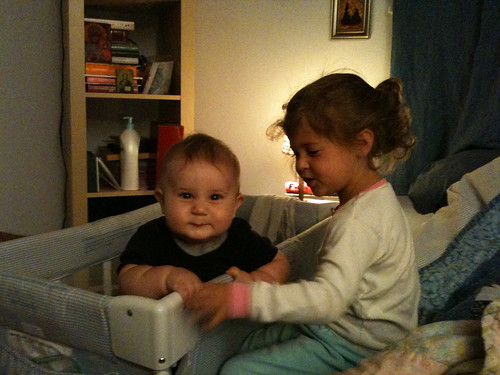 8. Anthony just insisted on taking over every picture slot. He’s just too cute.

For more Quick Takes, visit Jennifer at Conversion Diary. Also, wish her a happy anniversary . It’s been three years since her first quick takes post. That’s a lot of takes.