Again he was stoic baby. The first shot in his fat thigh didn’t elicit a reaction at all. He cried for a couple of seconds with the second shot, stopping just as soon as I picked him up.

2. My c-section scar has been aching of late. Anthony has started to lift up his legs and push against me when he’s nursing. When I’m sitting up, he gets a foot planted on my collar bone and pushes. But when we’re laying down, he gets my abdomen. Oh my how it hurts. He’s a big strong guy.

3. Also, Anthony has begun to find it funny to bite me. Today twice he bite me and then giggled when I responded with an “ouch” sound. I’m going to have to nip that in the bud.

4. Bella actually struck up a conversation with the librarian on her own initiative today. Told her she was doing school at home and we were studying the letters of the alphabet. Then said b was for apple and bike. Her subsequent embarrassment at that mistake led her to run away again. But she did start a conversation!

5. The other day Bella was drawing a picture book about a baby whale named Francis. He is nursing while his mama eats pizza. He goes to the doctor in his car seat, goes to Ikea to get bunk beds, and all sorts of other adventures. I am highly amused.

6. Recently I woke up remembering a dream that had me chuckling all day. In my dream I recast Three Men In A Boat (To Say Nothing Of The Dog…)

with James Joyce, T. S. Eliot and Leopold Bloom as three gentlemen touring the Continent by boat. I was trying to retell the story while staying in a B & B where the trio had wreaked havoc in their stay. Accompanying me at the B&B was a friend named Molly Bloom who was terrified the innkeepers would boot us because her last name would remind the of the story.

My imagination is so geeky weird.

7. I can’t remember if Ive shared this photo before and I’m too lazy to go back and look. But really, who can object to a cute fat baby covered in yogurt. 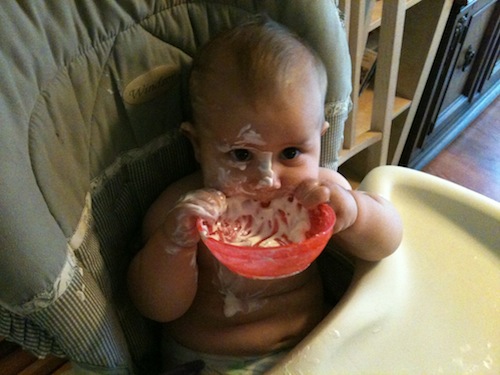