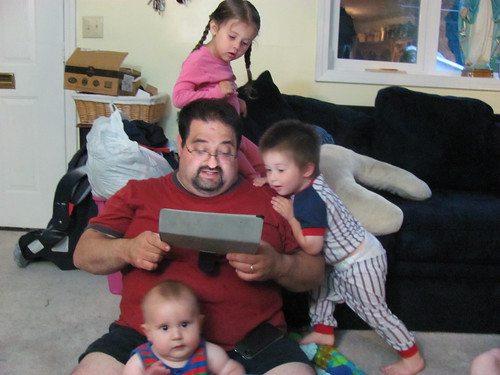 I thought I’d try to write some updates about what all the children are doing. Capture some little snapshots of this moment in time. They all seem to be growing so fast. I want to catch hold and keep them fast. 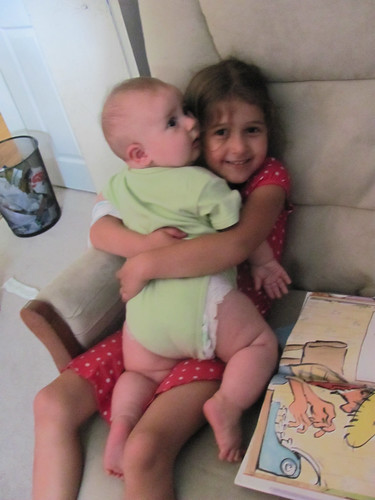 is dabbling at writing her letters. Just a little here and there. Perhaps soon she’ll be ready to really give it a go. She’s also started doing chores for fun on occasion. And yesterday she found a quarter in the church parking lot and wanted to know how she could get more money. So I set her to folding and putting away laundry for a quarter a load. She did a load of dishtowels and washcloths and a load of the kids’ clothes. All folded and put away in the proper places. Totally worth fifty cents. 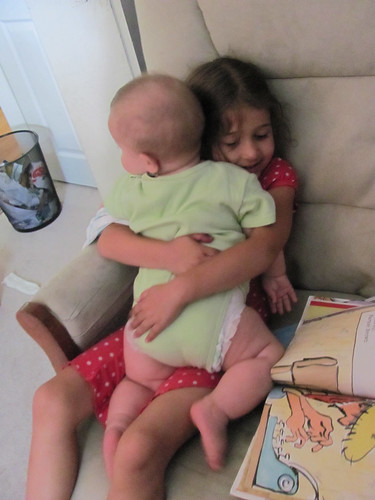 Bella wants to know how things work. She wants to know why. She remembers details and is working at putting together a picture of the world. I can see the gears turning, the information being filed. Oh so many questions: Why? Why? Why?

Bella says: “I wish I was as tall as a drop of rain. Then I would be taller than the house and would not fit inside.” 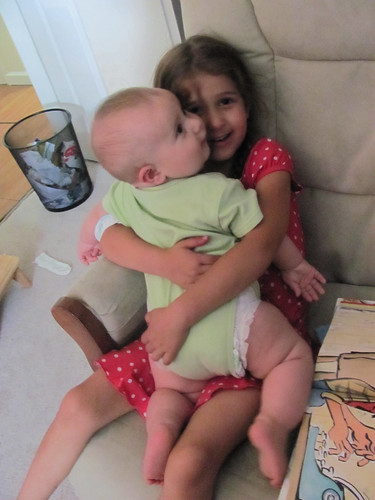 Recently Bella’s been getting up early to join Dom on his morning walks. They don’t cover as much ground as he does on his own; but she thrives on the one-on-one time with Daddy. She helps him see all sorts of things he’d overlook. Her favorite houses are the ones with pretty gardens, for example. She loves the overgrown empty lot by the car repair place. And she brings home handfuls of wildflowers to stick in a vase on the dining room table to pretty things up for me. 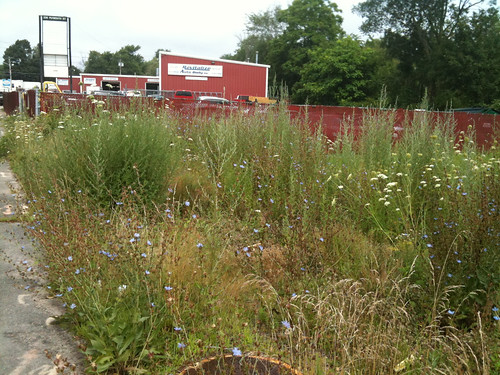 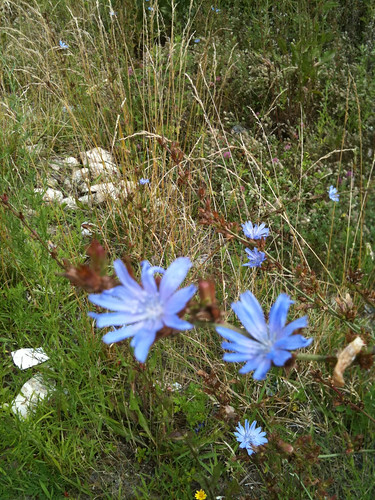 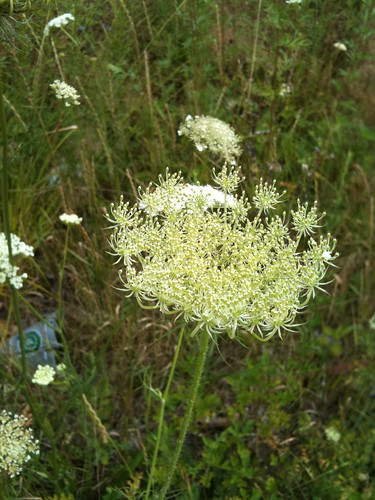 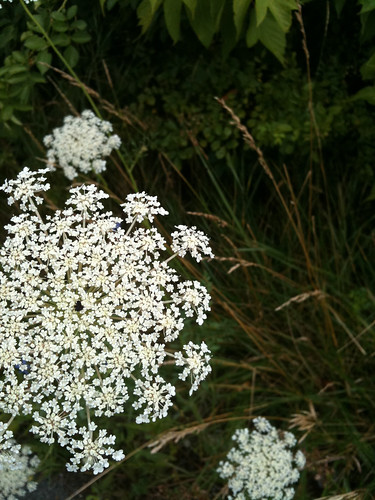 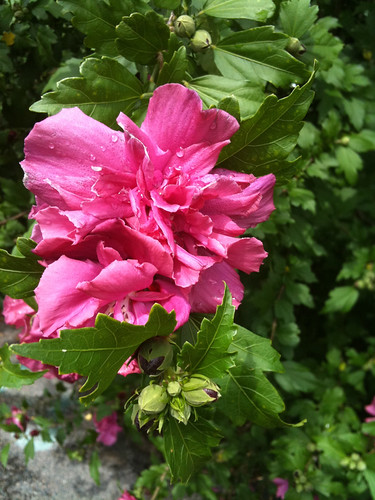 Bella’s current favorite flower. I don’t know what they’re called so she calls them purple-pinks.

Bella and I began reading Little House in the Big Woods this week. She was skeptical when I first brought it out. “What’s it about?” she asked. “Does it have pictures?” So I told her yes, there are pictures but not on every page. And then I said it was about two little girls named Mary and Laura who live with their mother and father in a cabin in the woods. Immediately she leaped up and plopped down on the couch next to me, saying that it sounded great. I guess she knows what kind of story she likes.

The first page had her hooked. Descriptions of the woods and all the animals that lived in it. She’s always upset when we get to the end of the chapter and I say, “We’ll read more tomorrow.” She wants more, more, more, now, now, now. 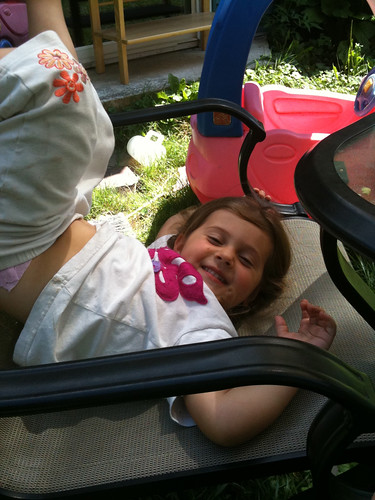 , on the other hand, doesn’t care at all for the Little House book. It’s hard to tell what books Sophie does like, though. She brings me books, I know she does; but there aren’t any distinctive trends. She’s listening to Bella’s books when I read them but not requesting them. Not glued to them like Bella is. It’s interesting to see how the two of them are in very different phases. Bella loves fairy tales right now, too. Snow White, Beauty and the Beast, Cinderella, Rapunzel, Sleeping Beauty…. over and over again. Sophie not so much. Though Sophie does love pretending to be a princess. 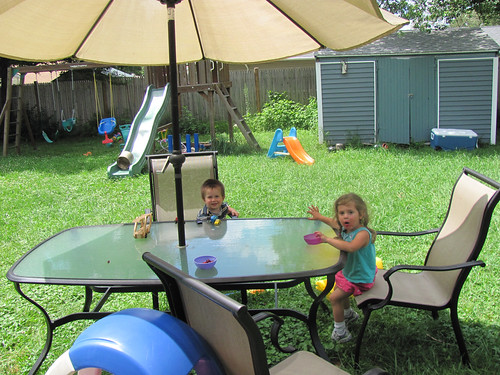 Sophie is hard to pin down. Sometimes it’s hard for me to see Sophie. She is so much in Bella’s shadow. Easier to see what Bella does that Sophie doesn’t do than to see what Sophie does that Bella doesn’t do. Unless it be that Sophie is stubborn, obstinate, and very much three. Temper tantrums. No! I do it. Mama do it! Yes, it can sometimes be hard to see beyond the current stage to the person who is exhibiting those traits.

Yesterday, for example, she spent almost an hour chanting Tree do it while we tried first to figure out how to help her and then ignored her as to allow my poor sister to take a nap. When Tree finally got up, Sophie stubbornly kept insisting “Tree do it.” but refused to elaborate on what it was Tree was supposed to do. A half hour of my sister trying various tactics from coaxing and cajoling to being silly to guessing and promising. And nothing worked.

Ah Sophie is good at making me want to scream. Especially when she’s sick as she is now. I want to cuddle her and tend her but she is fractious and more often makes me want to scream right back at her. Poor thing with the drippy nose who absolutely refuses to blow into a tissue and thus must be wiped a dozen times an hour. Only Mama can do it and she can’t manage it herself. And so her poor nose is red and raw. Oh God, grant me patience to love my poor Sophie who is doing her best to be unloveable, to push all my buttons, to drive me absolutely crazy.

And then of course there are the times when Sophie, Ben and Anthony all gang up on me. They all have moments when only I will do to hold them. All too often they have them at the same time. And Sophie and Ben refuse to share me. Oh I just want to crawl into my cave. Four sick children is so much to handle. I’m only glad that so far I’m not sick.

But I’m getting off track now… back to the updates. 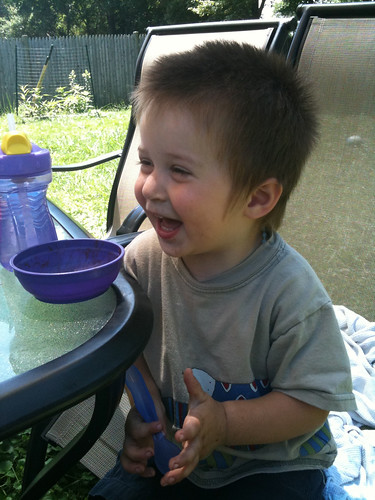 is all about cars and trucks and tractors etc. and Mother Goose. He likes Make Way for Ducklings and Curious George goes to the Fire Station. Our Father by Tim Ladwig. And board books. Any of the Impressionist series, The Big Red Barn, The Wheels on the Bus. Also he loves the Go in and out the Window song book. He is very meticulous about his cars and trucks. He often remembers to put his plate and bowl into the sink when he is done with them and likes putting his clothes into the hamper. He enjoys helping me with laundry. 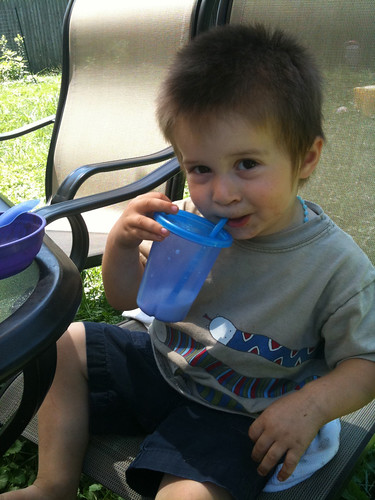 Tonight he was playing with a couple of crucifixes. One Jesus fell and the other was helping him. Then Jesus was sleeping. Ben gave Jesus some milk (nursed him). Jesus sat with Ben, went to sleep again, woke up. Ben noted that Jesus was naked. Then he got really mad when I hung the crucifix up on the wall. 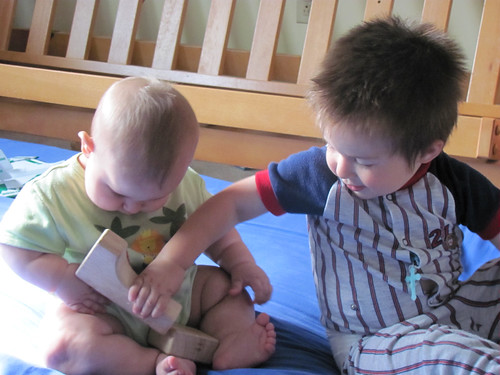 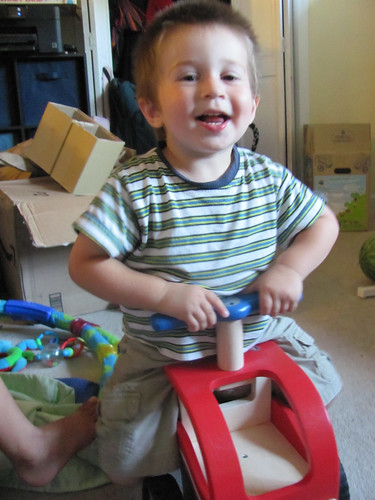 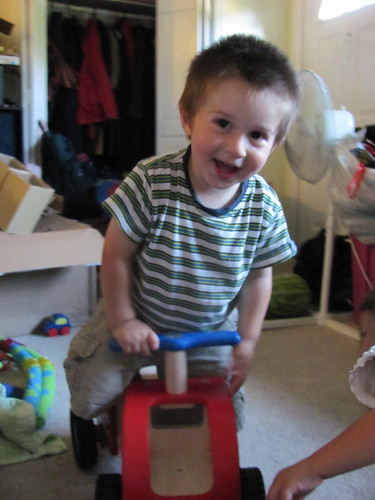 He’s at that age where little boys like to tie their blankets around their shoulders and pretend to be superheroes. But since he’s never met any superheroes (poor deprived boy!), he pretends to be a guardian angel. Really the same thing, though, isn’t it? Protecting the weak and innocent. 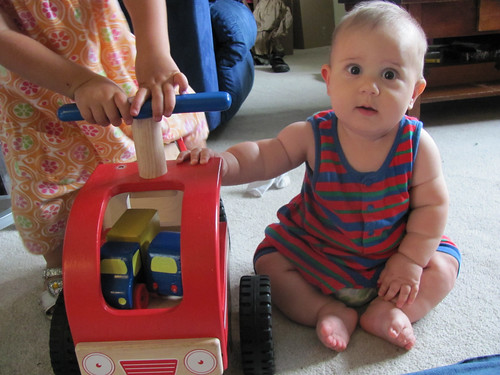 Anthony is just Anthony. Happy, jolly, cuddly baby boy. In addition to sitting, he’s added on the skills of grabbing and banging his hand up and down rhythmically to clap it against his leg, the table, or any other surface that gets in the way. He’s added a few new shrieks and coos to his vocabulary. He’s a great communicator or maybe it’s just that I’m a more experienced mom. I almost always understand what he wants. 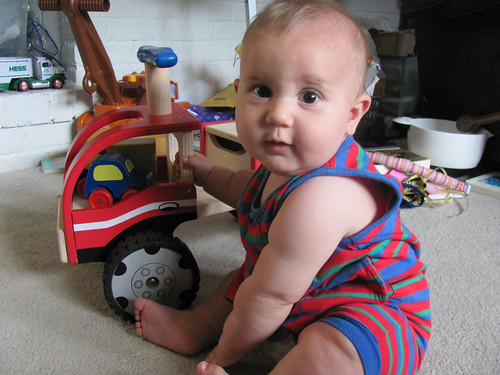 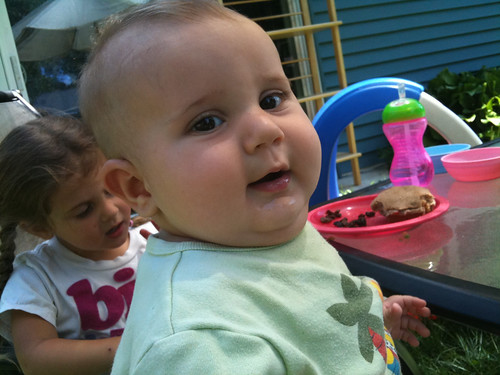 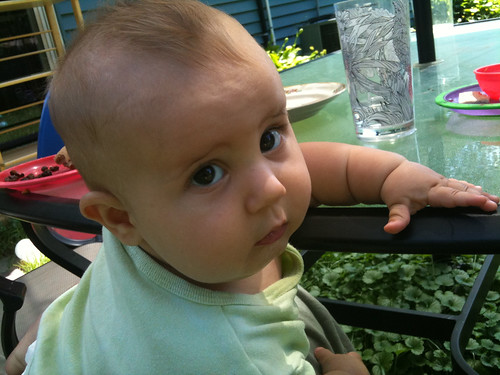 That’s about it for now. I’ll leave you with one happy photo that pretty much says it all: 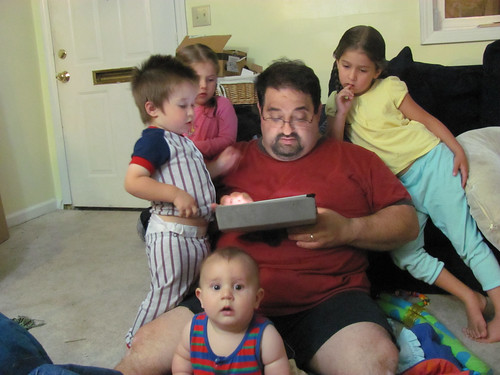