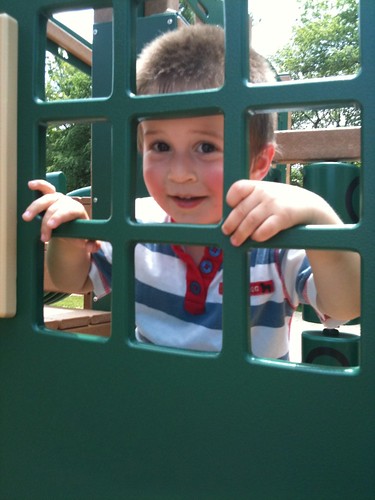 I had one goal this morning: vacuum the living room. I didn’t get to it until 10ish because, well, that’s how things fell out. So it was after ten when Bella declared that she wanted to go to the playground and Ben and Sophie chimed in. Although I entertained the notion, all I saw were the obstacles: Sophie was still in her pajamas, mind you. I had no plan for a picnic lunch and it was late enough that everyone was getting hungry/cranky. I needed to get cups of water, snacks for soon to be hungry kids, get diapers changed and Sophie dressed. And yet I could tell it was important to them so I gave a reluctant ok. And then things kept falling apart and my frustration level kept rising. At every turn I wanted to just stomp my foot and declare that it was impossible. We’re just not meant to go to the playground today! 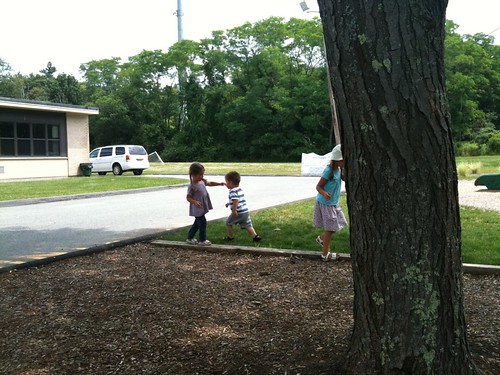 It was after 11:30 when we finally rolled out the door. The big kids had each consumed a piece of string cheese while I filled cups with water. (Ben overfilled his mouth as usual and spat out a mouthful of chewed up cheese on my bedroom carpet. Nice. I managed not to yell at him. A triumph given my stress level.) I tossed a big container of leftover baked beans and a spoon and a bag of raisins into the bag with the waters. That would have to do for a picnic lunch. 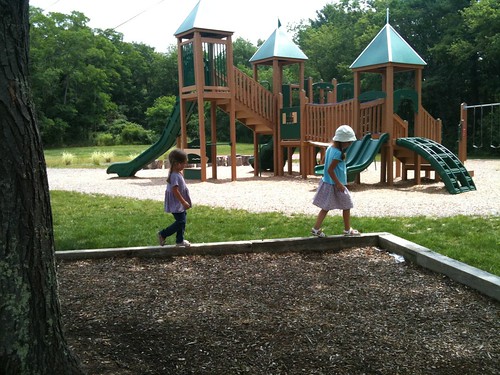 Then there was the matter of where to go on this hot day. I suggested that instead of going to the town playground, which is right next to a very busy street, we might instead go to the nice playground at our parish, which we have never visited before although we catch a glimpse of it every time we go to church.

School is out so there probably won’t be any crowds. It’s tucked back away from the street, behind the convent. There’s a picnic table under a big shade tree. And it’s close to Jesus. Bella began to cry when I suggested it, however, and Sophie immediately took up the idea: she wanted to go to St Joseph’s playground! Tears ensued. On both sides. I almost joined in. Another sticking point. It’s maddening how often these children want mutually exclusive things with a burning passion so there is just no way for me to win. No matter what I choose there will be tears.

I was mystified by Bella’s insistence that she would be bored with nothing to do at this other playground. Turns out she was just confused and thought I was proposing to take them to the empty ball fields. She somehow didn’t remember the playground equipment. 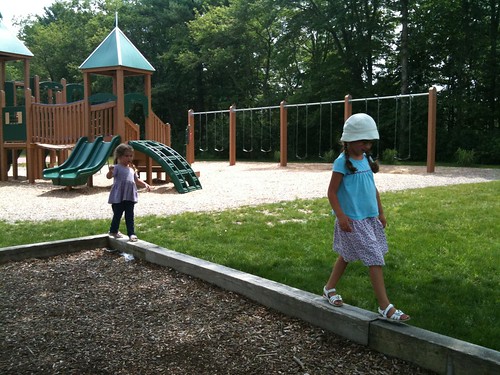 Anyway, I convinced Bella to give it a chance, reminding her of the virtues of trying new things and giving her a pep talk about how brave she was yesterday getting her shots and staying behind while I went to pick up our farm share with Anthony. She reluctantly agreed and so we were off with only a few more hiccups. 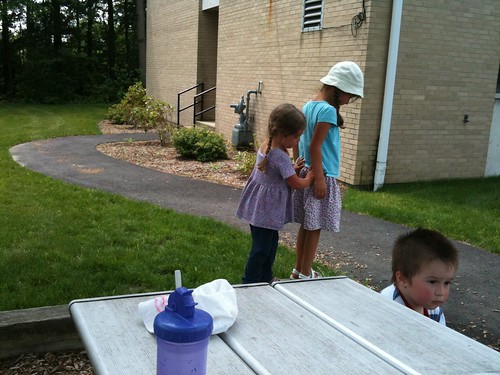 As expected we had the playground to ourselves. Oh bliss for this introverted mother’s heart! Bright sun, white clover-covered fields, tall trees rustling in a cool breeze. It was a beautiful haven of a playground. 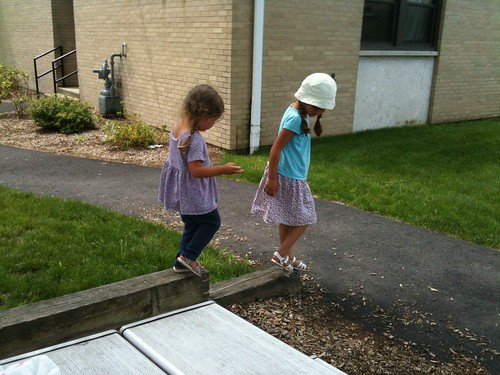 I charmed them all right away by pointing out the statue of St Therese that watches over the playground. Sophie insisted we pay her a visit first thing. We admired a couple of tiny rose bushes, one with two yellow buds. St Therese is Sophie’s very own special saint and she makes sure everyone knows it very vocally. But Ben and Bella love her too. All the children kept going back to St Therese over and over again during the time we were there. 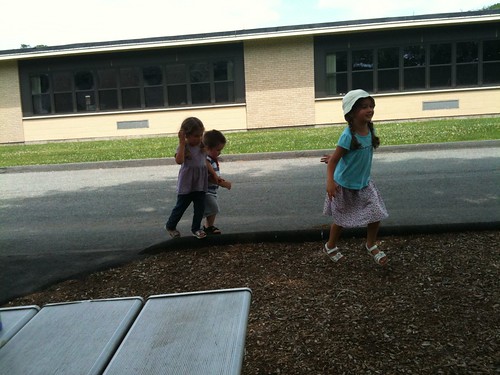 I soon got out of the sun and sat down at the picnic table. Ben followed and I was soon sharing spoonfuls of baked beans with him. The girls tore into the raisins and everyone downed gulps of water. Soon they were playing follow the leader with Sophie and Bella seeming to alternate at directing the play as they walked along the wooden beams that defined the picnic area. 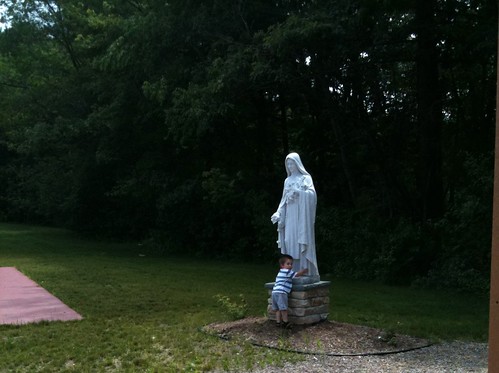 Once or twice Ben ran over to give St Therese a hug. 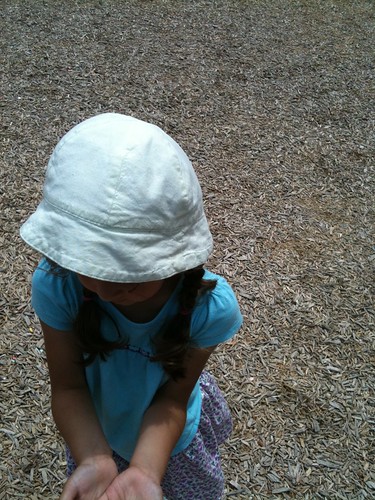 Bella was moving too fast for me to catch the inchworm in her hands.

Sophie found an inchworm on her hat and was enchanted. Bella later took him over and carried him around the playground, showing him the slide, giving him a ride on the swing, sharing him with St Therese.

At noon when the church bells pealed (and my phone too) we I prayed the Angelus. Somehow it felt so much more proper there in the shadow of the church than it does at home. I set a fifteen minute warning timer to go off at 12:30 so we wouldn’t stay too late and impinge on Ben’s nap. But when it went off I suggested we go to make a visit to Jesus in the church, grateful our pastor leaves the doors wide open in the day to let everyone know they are welcome to come in.

Bella balked for a minute but then they all agreed. Compassionate Sophie wanted to say a prayer for Jesus when he was on the cross and was hurting.

We crossed the parking lot and climbed the stairs to the church, pausing to admire the big planter full of petunias. At the door everyone stuck fists into the holy water font and made something that more or less resembled a sign of the cross. Then we knelt down in front of the altar. Sophie said her prayers for Jesus quietly in her heart. Bella and I discussed the real presence and the presence lamp. Ben said hi to Jesus and even Anthony turned and looked when I addressed him and pointed to the tabernacle. 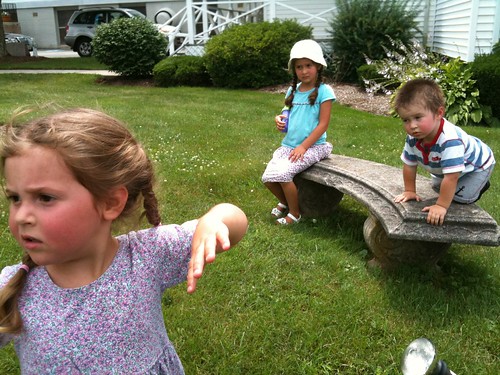 We only stayed a minute or two. It took longer to cross the parking lot than to pray in the church. But oh what peace that brief visit brought to my heart! I’ve been longing to make time for adoration and was inspired yesterday to see the big front doors of the church open yesterday. How good dear Jesus is to make it possible for us to come and visit him!

As we were descending the stairs Sophie declared her desire to go see Mary so we made another stop at the Marian grotto beside the church. Unfortunately Ben planted himself on the bench and refused to go. It was now getting late and I was starting to fret over his nap. So I scooped him up onto my hip—not an easy feat with Anthony in the Ergo on my chest—and hauled him back across the hot parking lot, cursing myself for parking near the playground instead of nearer the church. 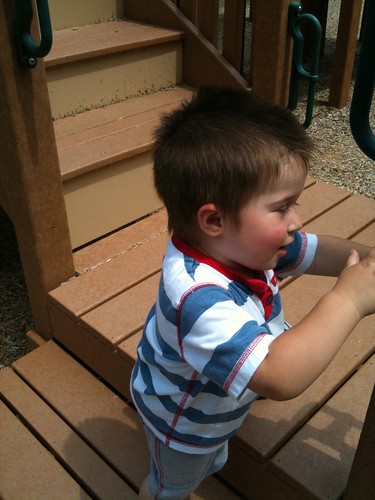 The van was hot and everyone protested. When we got home things began to fall apart as I tried to change Anthony and then Ben and get him ready for nap. He was overtired and I had to hold him down to make him take his Tylenol, but I feared without it he wouldn’t sleep well. After that I gave them all some of Ben’s birthday cake and even let Ben bring his slice into the living room to eat while I read him stories on the couch while I nursed Anthony. Ben was rather mollified and even agreed to walk into the office for his nap. “I do it!” he responded to my offer to carry him. Then he tried to crawl into the portacrib all by himself, “I do it!” But I had to give him a bit of a boost. 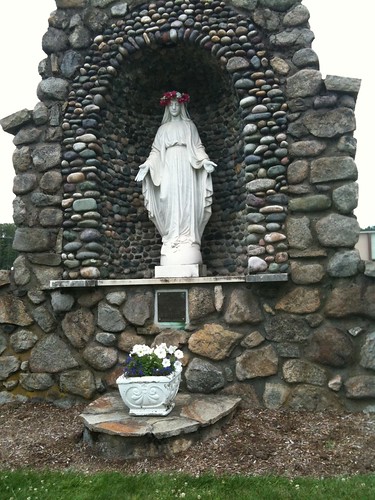 It is so easy for me to see all the obstacles to a plan. To focus on the lack of bread for sandwiches and the time it takes to get three pairs of shoes on little feet and all the other details that have to happen before we can depart on even the most minimalist of expeditions with five people. But oh my heart is happy that today I took my own advice to Bella and tried something new, something difficult. So great were the rewards. Truly my sweet mother of mothers was looking after us today. 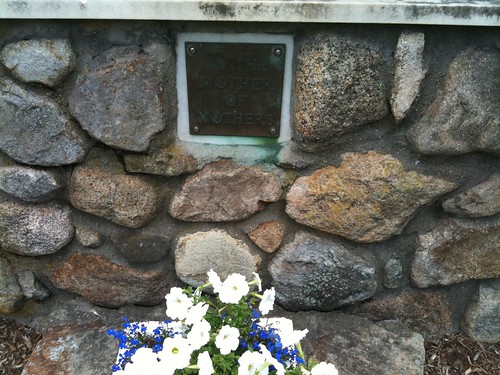