By Melanie Bettinelli on June 19, 2011 in Uncategorized 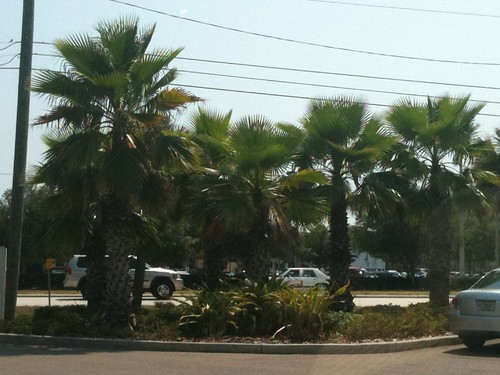 On Friday Anthony and I flew to Florida, just the two of us, to attend the wedding of a good friend of mine from college. Although we went to college in Texas (I’ve only been to Florida once before, when I was 2 or 3), it almost felt like I’d stepped into a time machine, going back to the years immediately after college when I shared an apartment with Richard and Matt, who was there as one of the groomsmen. Charlie, another groomsman, was at our apartment almost daily. So this was a reunion of sorts with three guys who I think of as brothers. Just like old times except now I had a nursing baby while I nursed my beer. 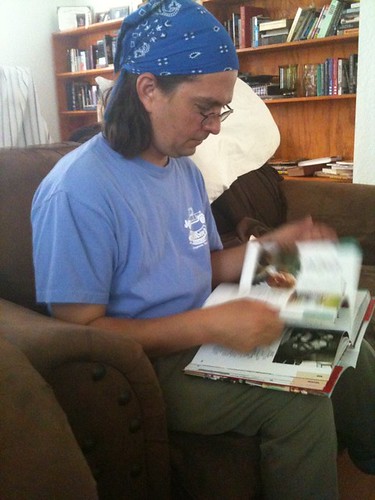 This is Matt, now a father of three boys. I was so sad Sarah and the boys couldn’t make it to the wedding as they’d originally panned. Here he’s flipping through a book about movies, talking about which one are good, which are not. The guys and I watched a lot of movies back in the day. They taught me how to watch a film and introduced me to a bunch of good ones. 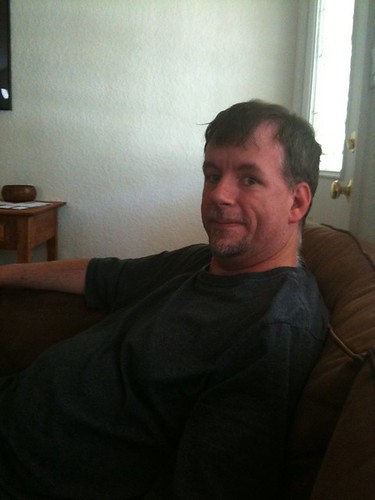 Charlie. I never knew him till after I’d graduated from college; but who cares about that sort of thing. We’ve known each other far longer anyway. 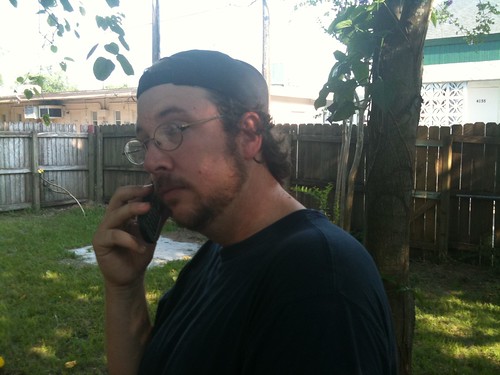 Richard, the groom. Making phone calls, organizing. Getting stuff done. He’s a teacher these days. And runs a theater company in St Petersburg with some other folks. They do Shakespeare and stuff. That’s how he met Rebekah. She’s a theater person too. I met Richard when we were both still seniors in high school when we were visiting the University campus.

I arrived on Friday afternoon after a long day (we had to change planes in Philly) and Charlie and Matt met me at the airport. We stopped to pick up Matt’s tux. This weekend I was hanging with the groomsmen with the exception that I did go to the bachelorette party. But then we went straight to Richard’s house where, yes, I put up my feet and settled in to nurse Anthony while I sipped on an icy cold Corona at 4 in the afternoon. 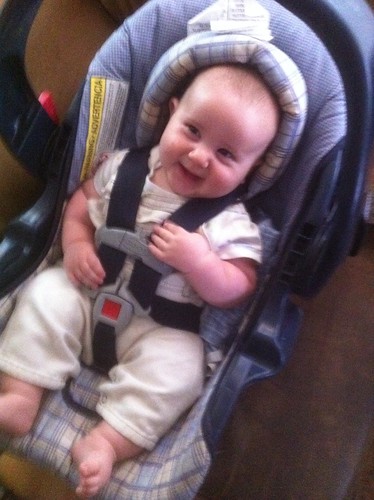 Here’s Anthony, glad to be off the plane at last. He’s smiling at Charlie, who’s snapping the photograph. Anthony loved meeting everyone. He’s definitely a people person.

The guys and I picked up some gyros for dinner from a place just around the corner called Salem’s. Mmm best gyros I’ve had in a long time. For some reason I can’t find good ones here. I ate mine sitting at the coffee table while making goo-goo eyes at Anthony. 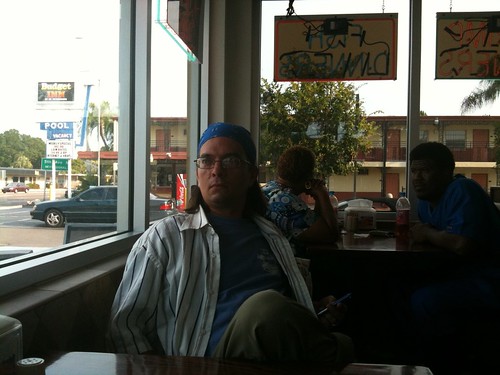 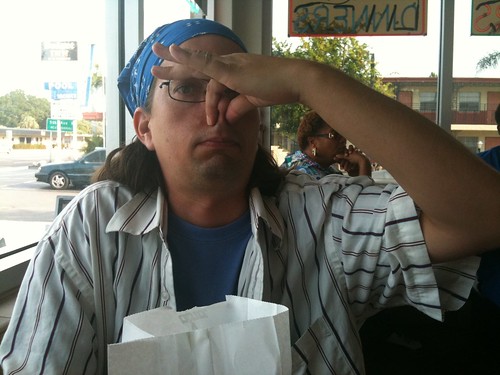 No, the gyros were not stinky. Not a bit. Matt’s just goofing for the camera.

Richard’s lovely bride Rebekah was there when we got back and I got to meet her for the first time. But I’ll save the pictures of her for later since they’re all from the wedding. I don’t often snap photos of people I’ve just met. 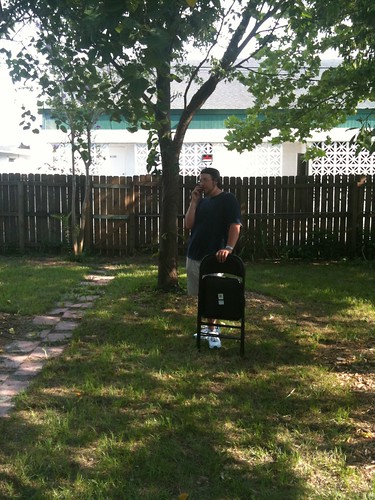 Richard, in his backyard.

Anthony and I were staying at Richard’s house. The bachelor party was going to be there so I had a choice. Hang with the guys, who were going to have a poker night, or go to Richard’s sister’s house to hang with the girls. It was actually a hard choice because I haven’t seen any of those guys in five years; but I decided I really should spend some time getting to know my friend’s new bride. I lingered at Richard’s for quite some time but eventually pried myself off the couch and headed out into the night. Lightning flashed in the distance as I followed the directions of the “lady in the box” down unfamiliar streets driving an unfamiliar car. 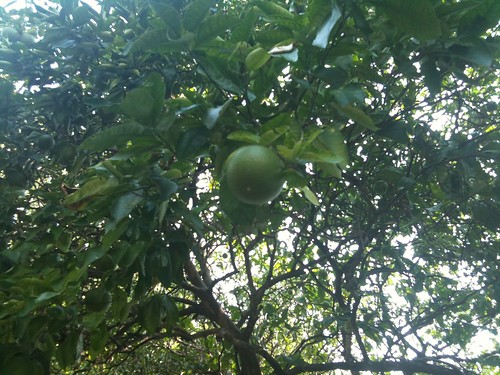 I had to snap a picture of the grapefruit tree for the girls.

The girls were watching romantic comedies and drinking mixed drinks. A very different atmosphere. I recognized Richard’s sister, Lauren, and of course I’d just met Rebekah a while before but everyone else was a stranger. I’m usually incredibly uncomfortable walking into a room full of people I don’t know, especially when they all already know each other. Fortunately, Anthony provided me with a wonderful conversational gambit. Walk into a room full of women with a cute baby boy in your arms and you’re immediately surrounded by people who want to talk to you. Or at least to ogle your baby, which is good enough for me. 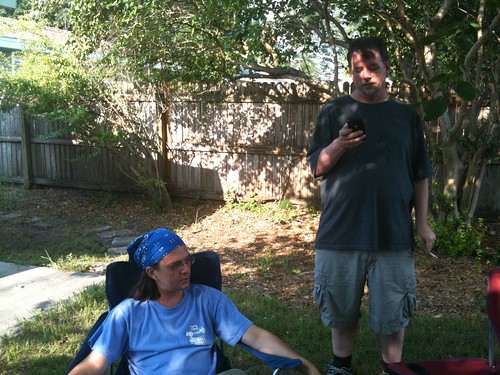 After my long day I wasn’t all that interested in junk food or drinking. I had several glasses of water and attacked the token veggie tray, ignoring the rum cupcakes and ice cream and bags of chips and Oreos. I did allow myself a small indulgence a had a bit of the frozen peach and champagne concoction. I chatted with people and did more talking about myself and my kids than asking about them, which is what I do when I’m nervous. I’m good at answering questions and I don’t mind answering questions about myself; but I often feel nosy when I ask other people questions.

Anyway, I stayed until midnight when I started to feel a bit pumpkinish. I drove back with a screaming Anthony, mad because I’d made him trade a comfy snoozy shoulder for his icky carseat. I also drove back with Michelle the photographer friend of Rebekah’s brother. She was a fun person to chat with and we got along well as the two out of town women who didn’t know everyone else. 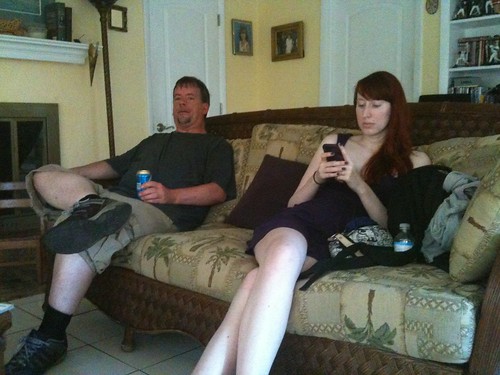 Charlie with Michelle, the photographer, at Richard’s parents house for the after party.

There was a mix up about the air mattress I was supposed to be sleeping on so Richard gave me his bed and slept on the couch himself. For the few hours he did sleep. I heard his alarm go off early. Grooms don’t get to sleep in on their wedding day. 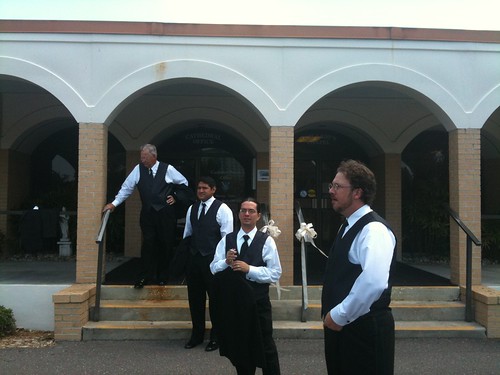 Outside the cathedral, waiting for something or other.

I did though. Anthony was quite easy on me. He slept until 8, ate, then went back to sleep till 10. Charlie arrived around 10:30 or so with a frappuccino and some pastries. Since Charlie was my ride to the wedding, we got to the church early and I just walked around with Anthony till the ceremony started. 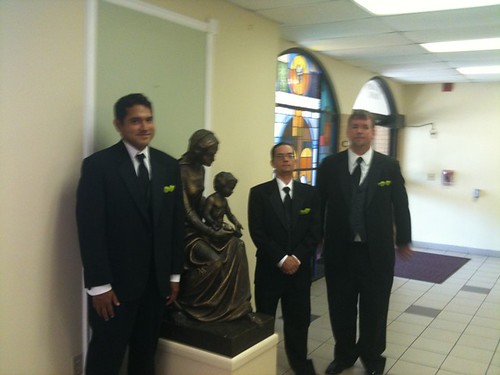 It wasn’t a full Mass since the bride isn’t Catholic. But it was, of course, a lovely ceremony. I love the reading from the Song of Songs, which we didn’t use at our wedding but I did print on our wedding invitations:

Stern as death is love,
relentless as the nether world is devotion;
its flames are a blazing fire.
Deep waters cannot quench love,
nor floods sweep it away. 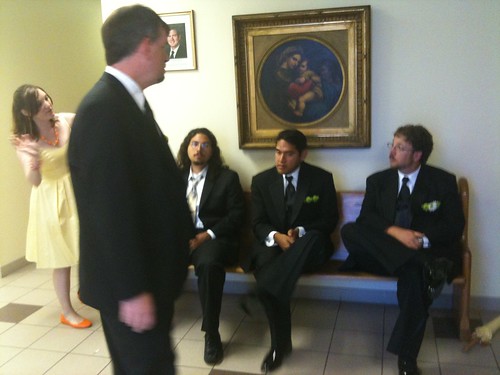 I don’t have any good pictures from the ceremony. My phone wouldn’t focus. I was sitting in the back because of the baby. 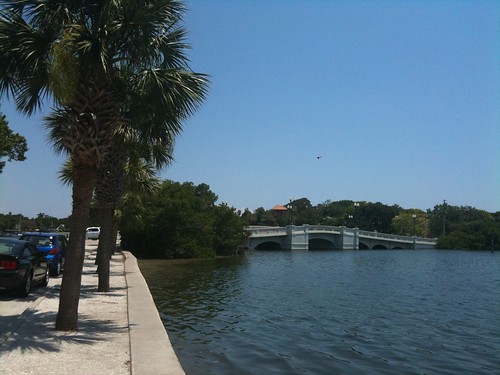 Anyway, the reception venue was right on the water. So pretty. This was the closest I got to the water all weekend, though. 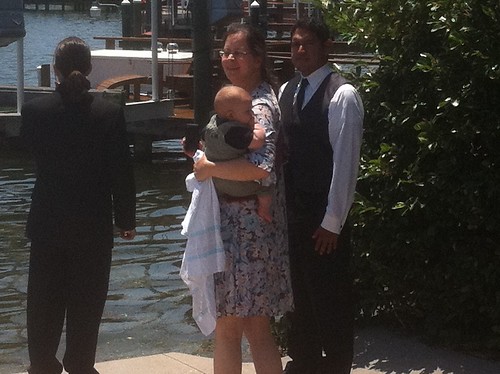 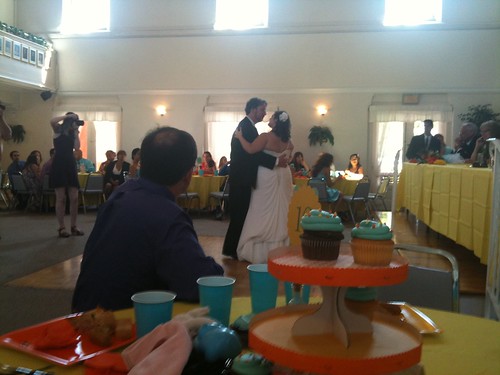 My view. Hiding behind the cupcake stand

Richard is half Cuban and the food at the reception was awesome Cuban food. Empanadas, croquetas, Cuban sandwiches. And then those pretty cupcakes, which were really, really tasty. 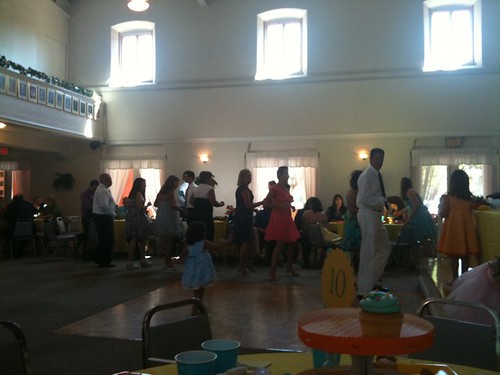 There was dancing, of course. Richard’s mother, his abuela, his aunts and sisters and cousins.

But the best was the little kids who of course jumped up and danced. And then began to jump off the stage. I just don’t see how you can have a wedding reception without bunches of little kids running about. After all, children are kind of the whole point of marriage, aren’t they? At least one of the points.

I was a big geek and forgot my camera was set to video. So this is the best shot I got of them.

After I realized that I’d got a video instead of a snapshot, it was too late. Things started to get silly. 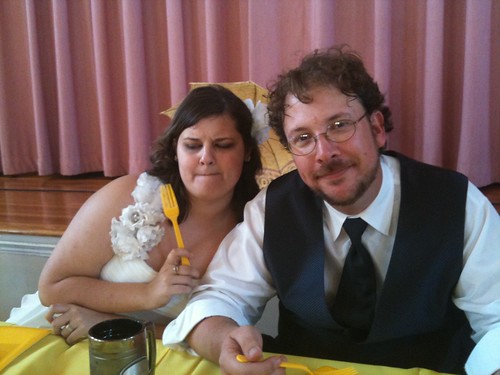 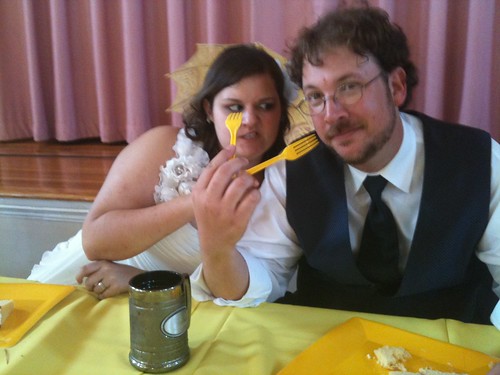 There were funny moments and touching moments and all that. Richard dancing with his mother. Rebekah’s brother singing a song.

Anthony trying on some sunglasses. 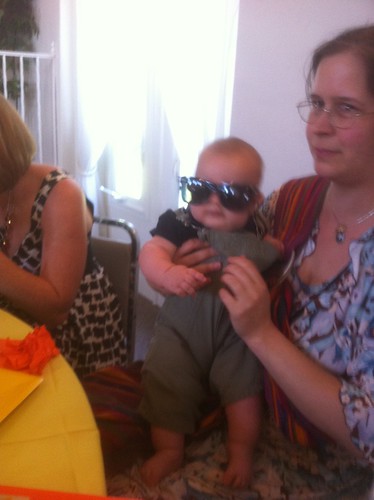 But the best part was really the after party. 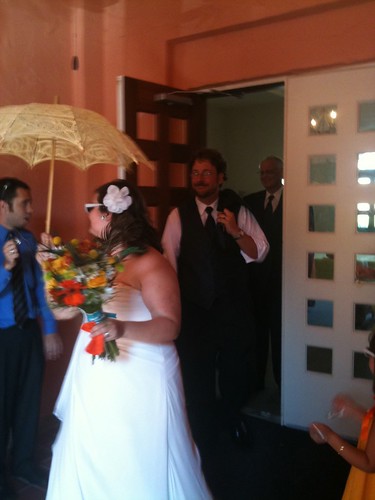 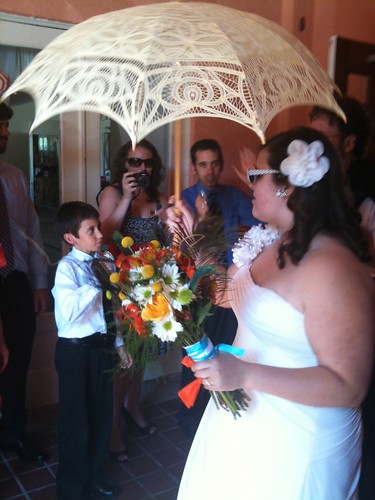 Maybe it’s a bit silly for the bride and groom to have a grand exit when you’re going to see them later in the evening anyway. But it was fun. And who’d want to skip the big party at the groom’s parents’ house? 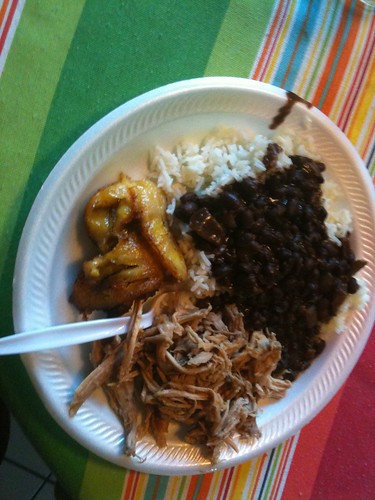 The best beans and rice. Ever. I don’t know what’s in them but these are just about heaven.

After Richard’s dad had directed us to the best parking spot, we found his mom in the kitchen dishing out huge trays of beans and rice and pork and plantains. 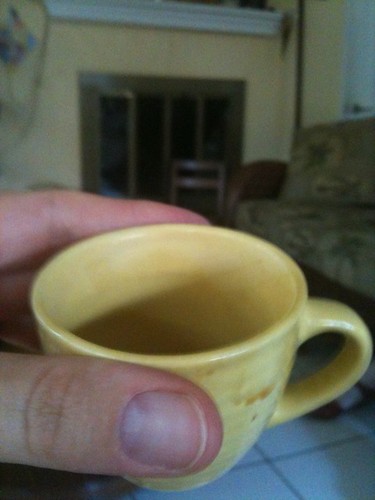 If the food is almost heaven, the coffee is paradise plain and simple.

And she offered us espresso while we waiting for people to arrive and the food to be served. 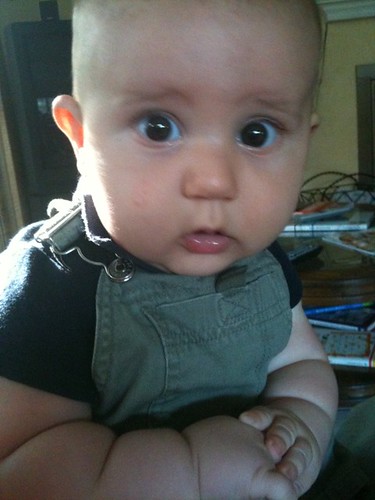 It was a great party and we stayed until after midnight. I had two of those little cups of espresso. Wow! I usually drink decaf coffee when I dink it at all. You could say I was a bit wired. Oh it was so worth it. 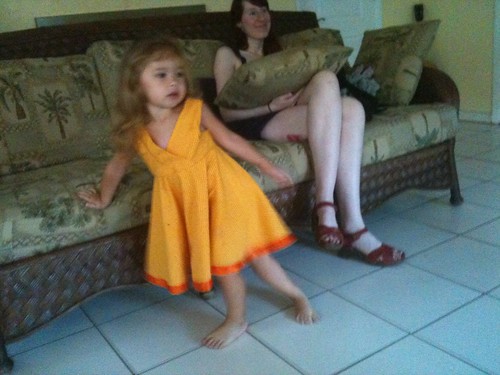 Richard’s 3 year-old niece reminded me so much of Sophie.

I had to get up early today to catch my flight back. Another long day of traveling. Both legs of my journey with planes filled to capacity. And I cut it close making my connecting flight because the smell of BBQ at the Charlotte airport was intoxicating. I just had to get my Carolina pulled pork sandwich.

It’s very awkward nursing a baby when you are sitting right next to a strange man. Fortunately the guy on the first plane was a dad and very nice. On the second plane I was assigned the middle seat but I grabbed the window and didn’t get a protest from the young soldier whose seat I’d stolen. He was on his way to his first station in New York. He looked very young and he slept most of the way.

It was so very, very good to see my family waiting for me. My girls with their long hair flowing wild since Dom can’t do braids. Oh so happy to see me. Ben had to give Ni-Ni a hug before he’d hug me, though. And then he kept wanting to stop and look out the windows at the passing cars and buses.

Home again to cranky kids and mess and love. It was so very, very wonderful to have a little vacation but here is where my heart truly is. And sometimes going away makes the heart grow even fonder. 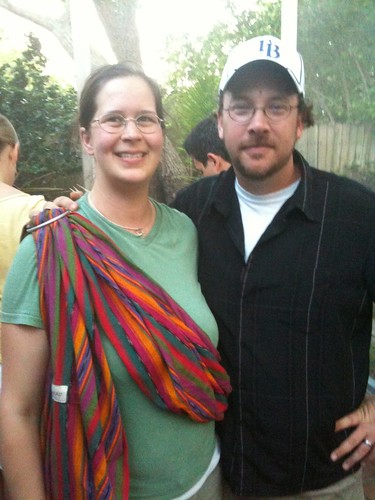 May God grant every blessing to Richard and Rebekah Miller as they begin their new life together. I am so very happy to see my friend finally settled with a wife of his heart.

And thanks to everyone who contributed to the collection taken up for me when Anthony was born. Part of that money bought my plane ticket and is what allowed me to go on the first solo trip I’ve taken in five years.

Also, a very special thanks to my husband who spent his Father’s Day weekend alone with our three older kids while both my sister and I were away (She went to a different wedding in Dallas.) I know managing the three of them is hard. Especially when they are all desperately missing their Mama.

One Response to There and Back Again