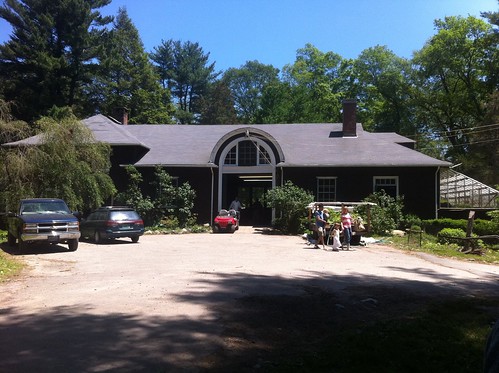 We just joined a CSA for the first time this year. (CSA is an acronym for community supported agriculture, also known as a farm share, where you pay a set amount and get a share of the farm�s output for the season.) 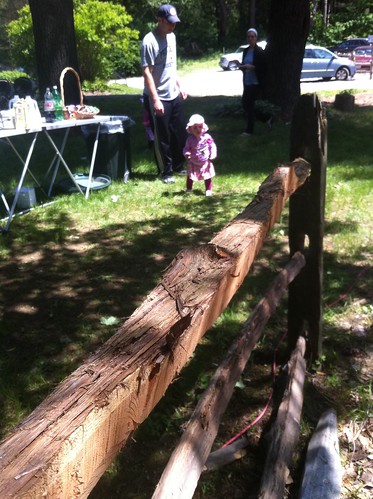 Today was the say to pick up our first share. The farm had a potluck picnic to welcome everyone. 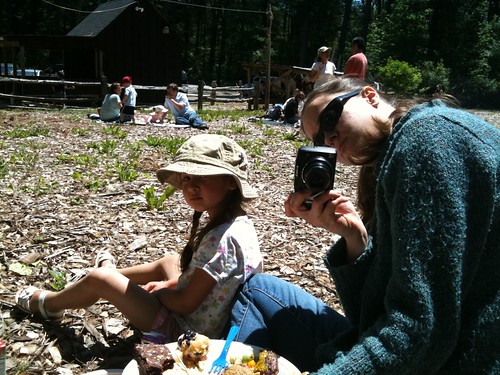 Oh my the food was all so good! Not the usual church supper potluck I’m used to. I suppose it stands to reason that people who would join a CSA would be people who like to cook. The burgers were thick and juicy and beefy. Some of the highlights were asiago crisps and really good salami, a pasta salad with fresh peppers, a black bean salad, a spinach salad with strawberries, cottage cheese with beets and cherry tomatoes, and a blueberry bar with fresh berries, a fabulous berry pie that I think had cherries and blackberries and maybe something else too, and an amazing strawberry almond coffee cake that I really want the recipe for. 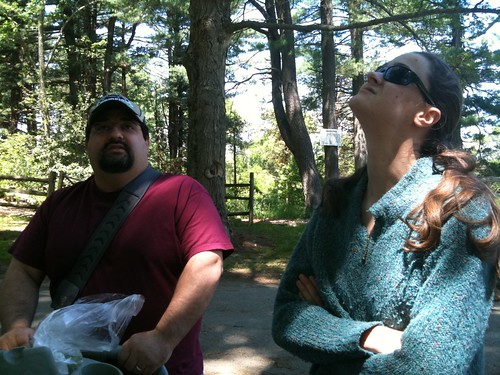 The farm is a pretty place, surrounded by woods. 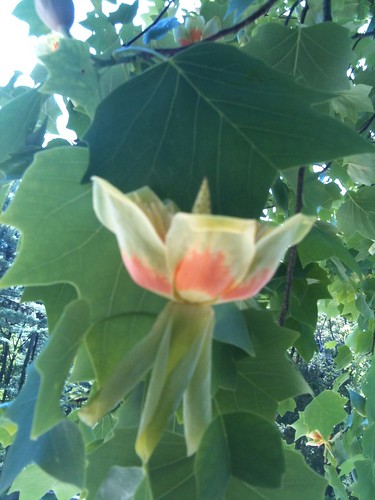 There was one gigantic tulip tree with beautiful flowers. 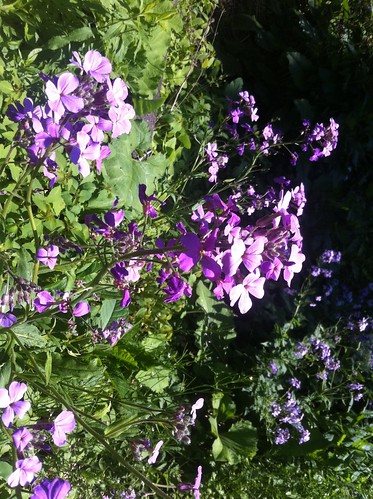 And these beautiful purple and white flowers in the woods that I didn’t know the name for. They look a little like impatiens but with much longer stems. 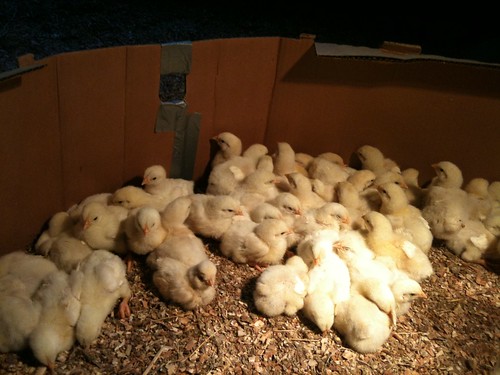 There were fluffy new chicks in the barn and in a coop out back plenty of hens and a crowing rooster. 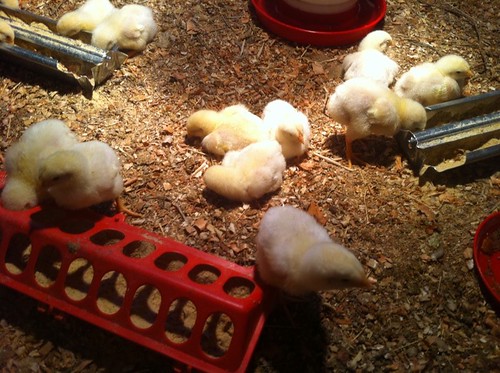 I ran into a woman I know from seeing her all the time at story time at our local library and at the playground. Since the farm is about half an hour from our house it was a surprise to see her there. 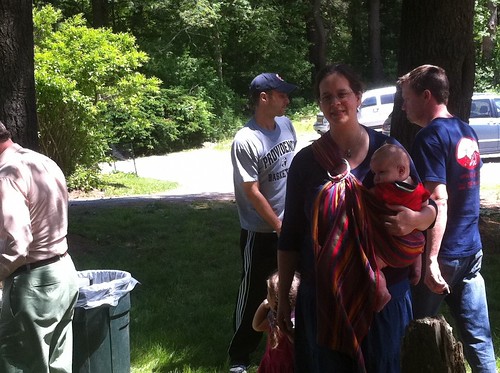 Unfortunately the day ended not so well for poor Sophie. She fell asleep in the car on the way home only to be jolted awake a couple of miles from the house when Dom had to stop short. She dropped her quilt on the floor and then screamed hysterically all the way home. When Dom brought her inside she threw up on the carpet, poor thing. Was it the mix of foods, that she’d worked herself up into a state, or that Dom jostled her when trying to carry her in while she was frantically fraying? Or some combination of factors? But she was running around outside ten minutes later so I’m pretty sure she’s not sick. 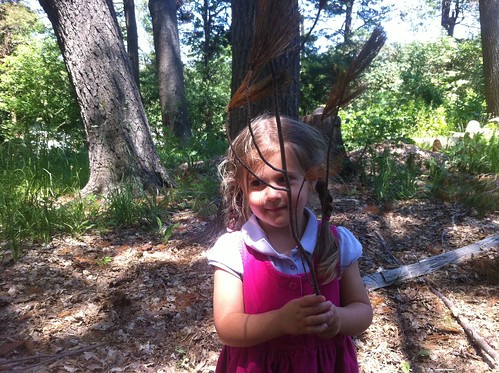 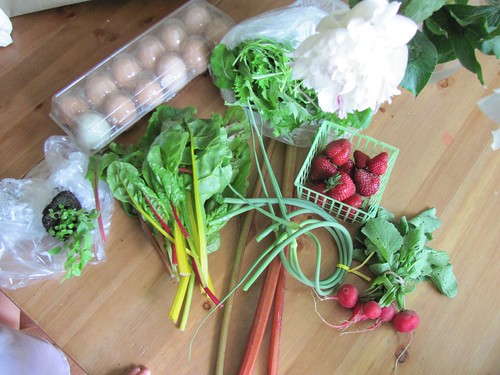 We also got a nifty canvas tote bag with the farm’s name on it. 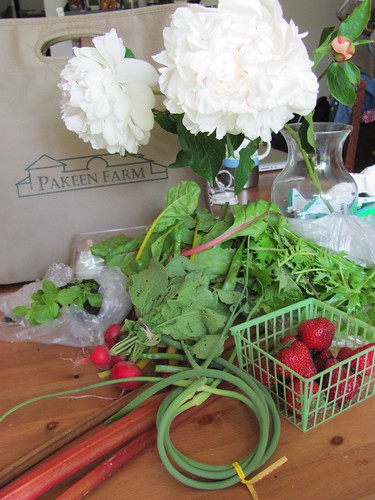 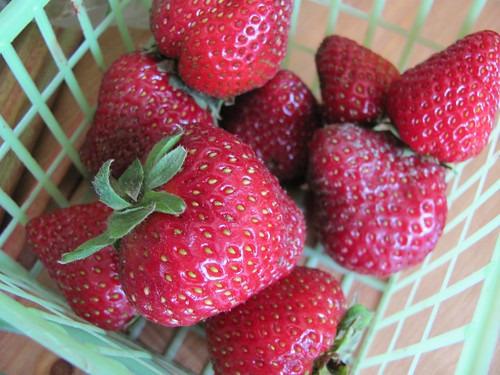 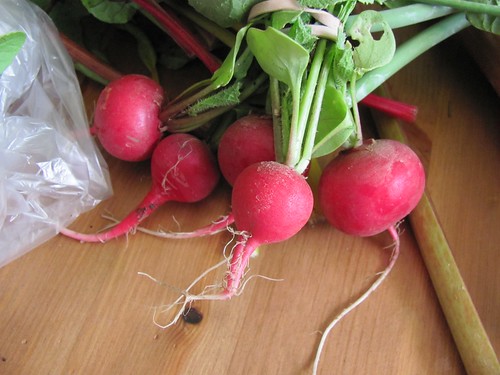 While Dom grilled a butterflied leg of lamb rubbed with some Southwestern spice rub (courtesy of the lovely Dorian Speed) I whipped up some sour cream mashed potatoes with some of the garlic scapes. And sauteed the radish greens and the chard with the rest of the scapes and some shallots and red pepper flakes. I tossed together a green salad with the mizuna and arugula and sliced up the radishes, threw in some avocado and topped it with a lemon mint dressing using some fresh mint from our garden. (The mint I planted two years ago has gone crazy and taken over the entire bed.) I also made a yogurt mint sauce for the lamb. It was all amazingly good. 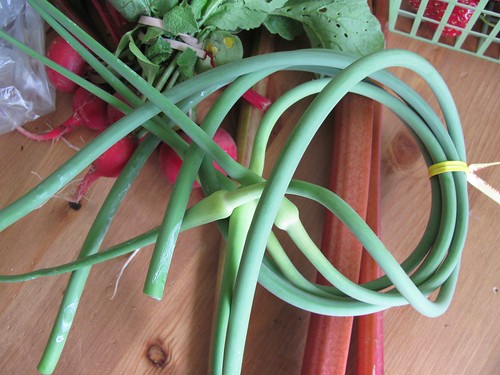 I’m not exactly sure what to do with the three stalks of rhubarb though. It’s not enough for most of the recipes I’ve found online. Any ideas? 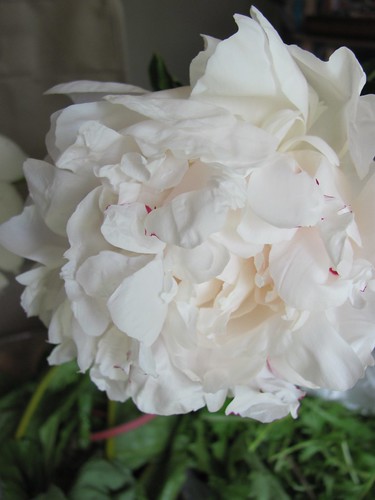 I love that our share includes flowers. I enjoy having fresh cut flowers on the table but can never bring myself to spend $8 for a bunch at the grocery store. Getting these gorgeous peonies as part of the deal was a great treat. 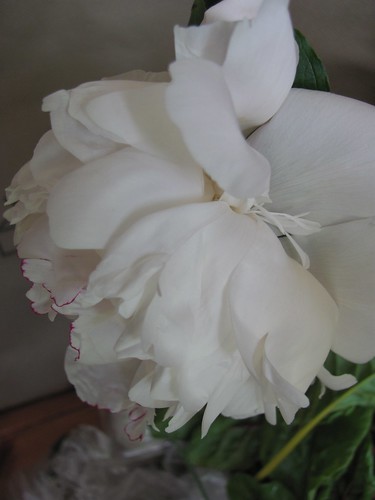 And did I mention the cute little toddlers there who were twirling their peonies like magic wands? Wish I’d got a picture of them! 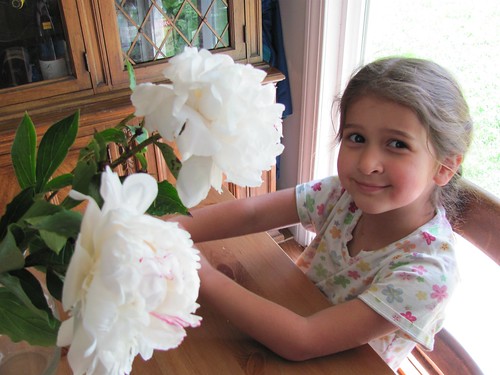 They had pink peonies too; but I let Bella pick and surprisingly she chose the white ones.