A Bunch of Quick Takes

I haven’t done a quick takes in a while so there are quite a few little snippets I’ve noted on Twitter and Facebook that I wanted to archive here. They’re all pretty short, though.

1. Recently Ben has been incredible stubborn at bedtime. Several times he’s just flat out refused refused to get into his bed. One night we spread his blankets on the floor and he fell asleep on the floor. I moved him into bed later. Another time I just left him in the rocker after I’d finished singing their lullabies. Later I went in because Sophie was screaming. Ben had climbed off the rocker and fallen asleep next to her bed. And then last night I left him sitting up on the beanbag chair and later found him curled on his side on the floor. I know part of it is probably the earache. Part of it is probably just being a stubborn 20 month-old. And part of it is just Ben.

2. The other day Sophie asked me: “Why am I cuddling you?” All I could do was laugh. If you don’t know, I sure don’t, sweetheart. 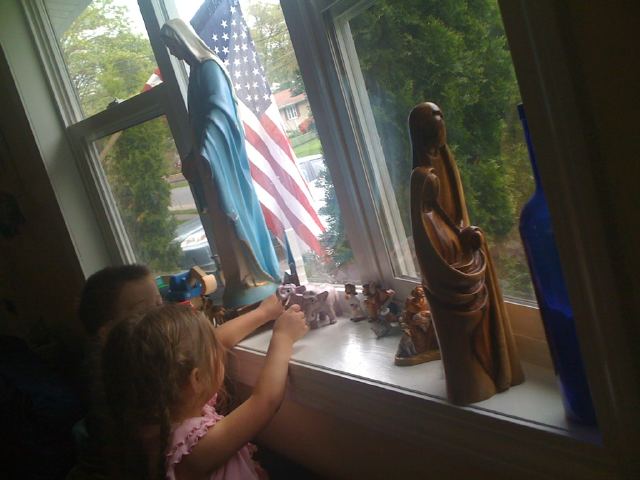 We had to move the nice vase my aunt and uncle gave us for our wedding because it is impossible to keep the children from playing on the windowsill. Not that I blame them. It’s the only window they can actually look out of.

4. After watching a few old home videos on my computer the other day, the girls began pretending to be in a video. “Here’s Sophie when she was two,” says Bella. Oh my heart melts!

5. Me to Bella: “Look at Sophie!”
Sophie: “I’m someone else.”
Now Sophie’s big thing of late is that she’s always pretending to be someone. But that’s just lazy. She can’t even think of who else she is. I love how contrary three is! 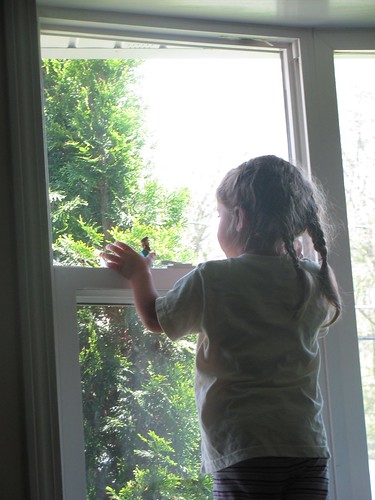 Sophie is pretending the window is an elevator. Putting the animals on the top and then raising it up. 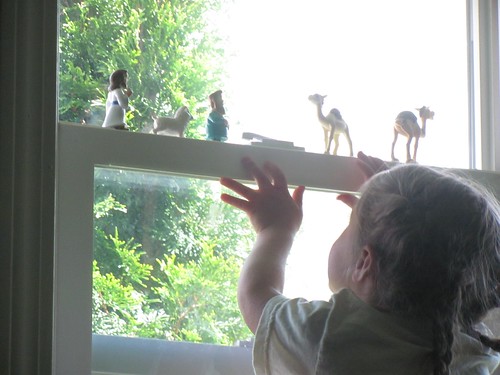 and lowering it down. 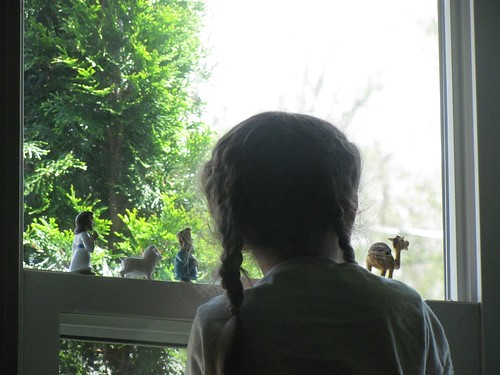 7. At the grocery store checkout a woman said to me: “I want to take a picture of you to send to my daughter-in-law who can’t shop with one child!” It was said with a sort of self-deprecating. She was a grandmother shopping with a toddler and an infant so she obviously knew something about shopping with children. I feel sympathy for the daughter-in-law. I was her once. But I did shop with one. And then I shopped with two. And then three. And now four. It isn’t easy; but it can be fun. I love bringing the girls shopping with me. I just wish I had more hours in the week to get it all done.

8. Bella has been making up her own nursery rhymes: “Alice Cacallis was dressed all in blue. Alice Cacallis said yes to the crew.”

Alice Cacallis has now become a regular member of the cast of imaginary characters who inhabit our house. Also, I think the other day Sophie told me that her name was Alice Cacallis.

9. How I know that Sophie is listening to my prayers. She makes up her own: ” The Lord has come to set earth to be free!”  Yes, yes he has!

10. The other day poor Ben was having trouble communicating. I think he was saying “Dirt beeps” but that doesn’t make any sense. It was definitely not “truck beeps”. I tried so many possibilities and he said no to each and every one. But we started to get silly and he laughed instead of getting frustrated. And now “The dirt beeps” has become a family joke.

We all have been singing it for weeks. But what is cutest is Ben’s singing “Ob-La-Di”.

12. Grandma and Grandad Scott got Bella a geodesic climbing dome for her birthday. She can’t remember the word “dome” though. So she’s been calling it a “hill ladder.” I think her name is better. 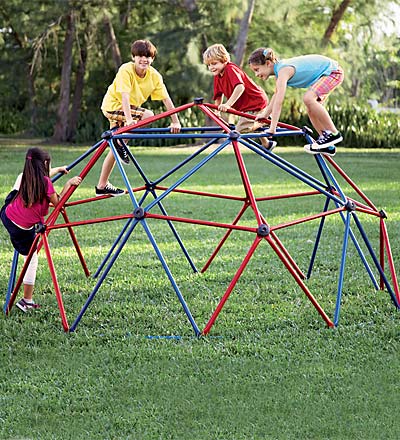 This is the catalogue picture. Not my kids, not my yard.

13. Theresa says, “Hi Sophie, nice to meet you.”. Sophie replies, “I’m not one of those people who live over THERE.” Theresa, “Oh do I already know you?” Sophie,“Yes!”

14. At the playground the other day a busybody grandmother picked up Ben and lifted him off the playscape steps while I was stopping to help Sophie who had fallen down. Naturally, he started screaming. I got so mad. Why do people think it’s ok to put their hands on other people’s kids? He was not in danger, I was less than ten feet away. She could have just asked me if he was ok before acting.

It took most of the time we were there for him to cam down enough to want to go play. By the time he did recover, Sophie was feeling sick and ready to go home.

Ok so that’s twice as many as a normal quick takes! What can I say, I have a writing problem. That’s why I have a blog.