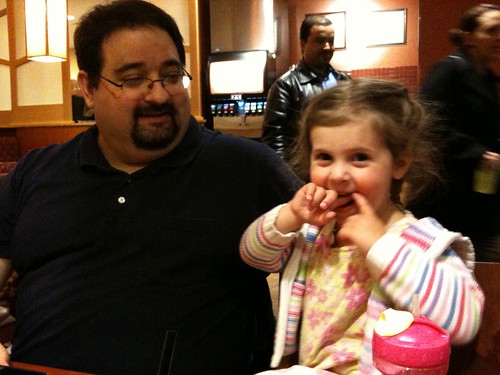 Yesterday was the third anniversary of Sophie’s baptism. So of course we had to celebrate. We started off the day with a little surprise on the table for her. A small inexpensive crucifix on a cord. If I’d thought about it the night before, I’d have had her baptismal candle on the table then too. I’m still working out the details of how I want these days to go.

Dom had a late meeting last night so we couldn’t have a family dinner with him. Instead, we met him at the Panera near his office for a special lunch. Sophie had mac and cheese and thoroughly enjoyed sitting next to daddy.

Sophie and Bella helped me bake a chocolate wacky cake—my new favorite since it’s almost as fast as a cake mix and makes half as much cake. Thus we only have two days worth of cake instead of it lasting and lasting and lasting. (My hips thanked me.) Also, I used whole wheat flour and no one noticed.

Theresa joined us for dinner. We just had fishsticks and quesadillas for the kids and leftovers for the adults. Then we had cake. Because really who cares what dinner is, we all just want cake.

But before the cake we had a little ceremony. We lit Sophie’s candle and we renewed our baptismal promises (thanks to iBreviary which has the full text of the baptismal rite). We also prayed the litany of saints and sang Holy God We Praise Thy Name. Then Sophie blew out the candle. Not so sure of the symbolism there; but she enjoyed it and after all we don’t want to burn it too long.

Bella noticed that we didn’t go to Mass like we did last year. I explained that I am simply not up to taking all four of them to Mass by myself. Since both Dom and Tree had to work (and Dom had a doctor’s appointment first thing in the morning) I simply had to skip it. Maybe next year. I was impressed that she remember though. Last year we asked Father to give Sophie a special blessing after Mass and in an odd coincidence a perfect stranger handed me a framed portrait of Padre Pio.

I’m still in the development stage like I said. I would like to make a little booklet with the text of the baptismal promises, the litany of saints, and a few other things so that we have something to regularly follow. I want to keep it all pretty simple but make it something the kids look forward to that will stick with them.