I wasn’t going to post anything about Pope John Paul II. It seemed to have all been said and much better than I could say it. But then I was watching the slideshow that the Philosopher Mom posted on her blog and I remembered this other slideshow that Dom made at the time of his death. And that sent me wandering down memory lane.

Dom and I were together the day John Paul II died. Actually we were at a talk on marriage that Scott and Kimberly Hahn were giving. I remember how Scott Hahn led us in prayer when the news came that the Holy Father had finally died—how lovely it was to be in the midst of a group of Catholics at that time, to be together in remembering him and loving him and praying for him. I remember the joy we all felt amid the sadness, the sense of fulfillment. The image that sparkled in my head of John Paul and Mother Teresa embracing each other in a love-filled greeting.

And I wanted to highlight one photo in particular that means to much to our family, an image of my nephew John Paul hugging the Holy Father: 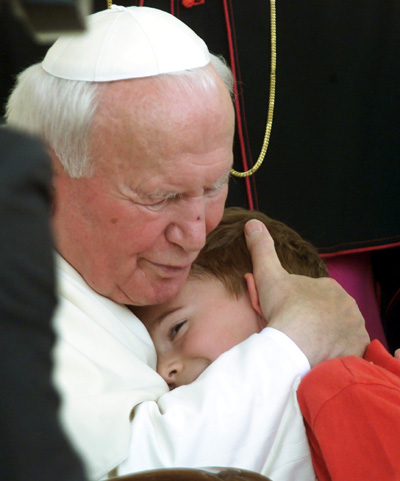 Photo is copyrighted by CNS/Reuters 2000.

On Wednesday, May 16, 2000, Dom’s brother John’s family received the extraordinary privilege of meeting Pope John Paul II at his Wednesday general audience. At the time, the Holy Father granted special blessings to Dom’s three nephews, Peter, Joseph, and JohnPaul (pictured above). Little JohnPaul was two years old and the Holy Father embraced each of them. A Reuters photographer captured the moment above and it ran in several international newspaper, including the London Guardian, on the next day, the Pope’s 80th birthday. What an extraordinary moment and extraordinary privilege.

As I’ve surfed around in the past few days I see many people are using photos of the energetic younger pope who traveled the world and energized millions. But those photos don’t move me, in fact in a strange way I find them a bit off-putting. While the young JPII was handsome and charismatic, there still seems to be something lacking in that charming smile. Instead, the photos that make me pause were those from his last years when he was old and stooped with a puffy face that bears little resemblance to the younger, hale pontiff. These photos show a man who has given every last bit of strength to the job he was given to do, who is utterly spent, burnt out. When I look at the photos of JPII in his last years I am reminded of St Paul’s words: “It is no longer I who live but Christ who lives in me.” In these Karol has been almost entirely used up, poured out as an oblation, and all that remain is Christ’s profound love.

While I was pondering about why I prefer the photos of the old, feeble Pope, I kept remembering a comment by Deirdre Mundy on this post by Simcha. Deirdre writes:

. . . he died after purgatory on earth, by suffering through Parkinsons and living out his last years with a faith and dignity that showed to the world that ALL lives have value, even, old, sick lives past their peak of strength.

And while we don�t really need a �world leader who defied communism and was adored by all� saint right now, I can see how we might need a �old people deserve love and respect even when they embarrass us by being feeble and�old�.� saint.