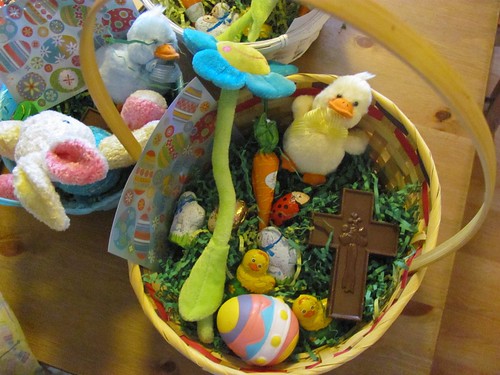 So we made it to the vigil last night. All of us. At about 4pm Dom began to have second thoughts again. (Maybe that makes them third or fourth or fifth thoughts?) “We still have to give them bath and eat dinner and everything. I’m not sure this is going to work.” Well it did work. The girls were lovely in their Easter dresses (I regret not snapping a picture.) and We made it out the door by 7:15. 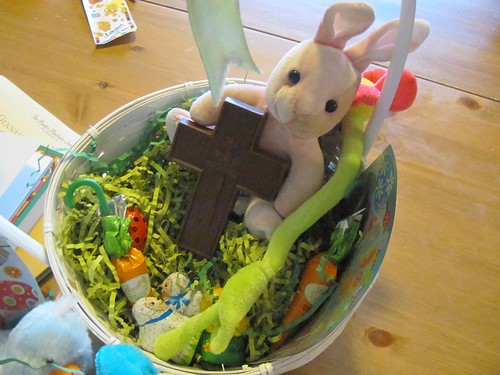 As Dom was getting the kids into the car I was standing in the living room doing my last mental sweep to make sure I hadn’t forgotten anything. Dom poked his head back in the door and asked, “Ready?”

“No,” I answered. Not remotely. The house is a mess and My hair hasn’t been washed in more than a week. I don’t feel like I did enough spiritual reading this Lent. I haven’t been to confession since right before Anthony was born. I feel incredibly unready.” 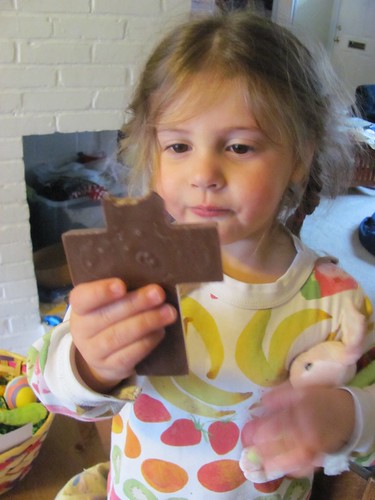 But my sweet husband reassured me that it was ok. I looked fine he said. And then he reminded me that Christ comes to us even in the midst of our mess and brokenness. Priest’s wife posts one of my favorite Easter meditations from St John Crysostom that says it much better than I can:

f anyone has arrived even at the eleventh hour, let him not fear on account of his delay. For the Master is gracious and receives the last, even as the first; he gives rest to him that comes at the eleventh hour, just as to him who has labored from the first. He has mercy upon the last and cares for the first; to the one he gives, and to the other he is gracious. He both honors the work and praises the intention.

Enter all of you, therefore, into the joy of our Lord, and, whether first or last, receive your reward. O rich and poor, one with another, dance for joy! O you ascetics and you negligent, celebrate the day! You that have fasted and you that have disregarded the fast, rejoice today! The table is rich-laden; feast royally, all of you! The calf is fatted; let no one go forth hungry!

I feel very much like an eleventh hour laborer. And yet I also feel very joyous. 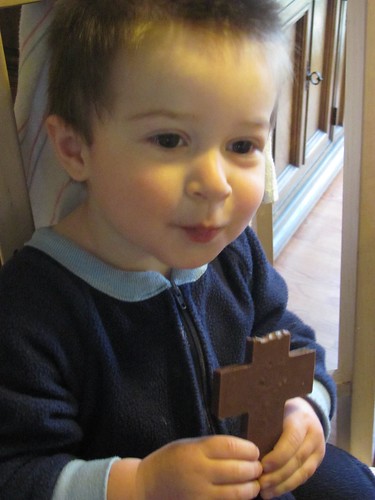 The church parking lot was very full but we still found a seat in the very front pew. Anthony tucked into the sling, my sister cradling an already tired Ben, two little girls with bright eyes shining in the night. There was a light on in the sanctuary so we could see to find our seats. You could see the empty tabernacle, the festive piles on piles of flowers. Waiting.

Father gave everyone a greeting and made a couple of announcements about cell phones and the like, reminding people that it was going to be dark. Then the lights went out, we all stood and turned to the back of the church. It was beginning.

A light glimmered in the darkness, hardly seen over the sea of heads, and the mike wasn’t on so we could barely hear the blessing of the candle. Dom lifted Sophie so she could see and Bella stood up on the pew. The candle, a pillar of fire, was suddenly visible and the deacon sang out: “Christ our light!” and we responded: “Thanks be to God!” Three times he raised the candle high in the air, three times he sang out, three times we responded. And as he processed down the aisle the light spread from taper to taper until everyone was holding a little living flame, the darkness was banished and the church was filled with that amazing Easter glow. A beautiful smile from the man standing next to me as he held out his flaming taper so that I could light mine. I looked down and saw Sophie’s face beaming. Bella smiling contentedly. 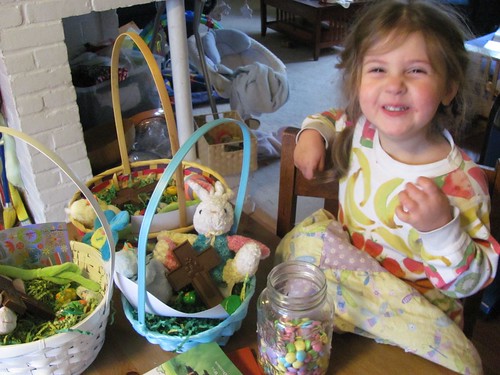 Father sang out my favorite part of the Vigil, the Exsultet.

We had a short form of the Liturgy of the Word, only three of the Old Testament readings: the first Genesis, the Exodus, and the Ezekiel. I was kind of sad not to hear all of them. But with four children in tow not as sad as I’d have been in previous years. Anthony nursed vigorously through the Old Testament readings (thank God for the cover of darkness or else Father might have got an eyeful) and then mostly slept for the rest of the vigil. 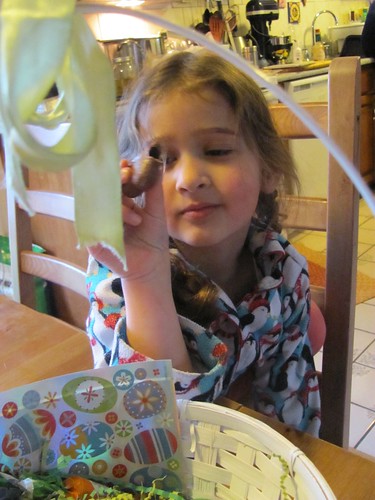 Oh the blinking, squinting wonder standing for the Gloria, joyful with pealing bells as all the lights suddenly come on flooding the Church. 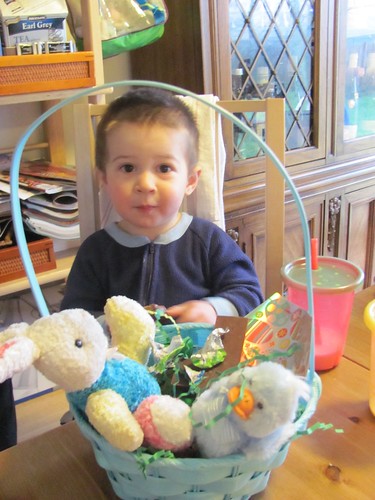 We all called out our responses as we renewed our baptismal promises. We were sprinkled with water, washed clean!

Tears poured down my face during the Litany of Saints as I felt the presence of all those witnesses and companions on the journey. Sophie beamed at me: “Oh! It’s the litany!!!” 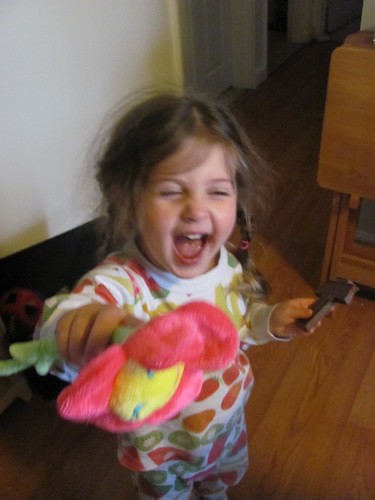 A special grace at the consecration. Funny as I realized that I don’t need to feel the Presence, just affirm my belief as an act of will. And with that was a sense of Presence, a feeling that was sort of not a feeling.

Oh so many moments of grace filled the night. And at the end joyful greetings. Everyone seemed to want to admire our kids and tell us how good they were. 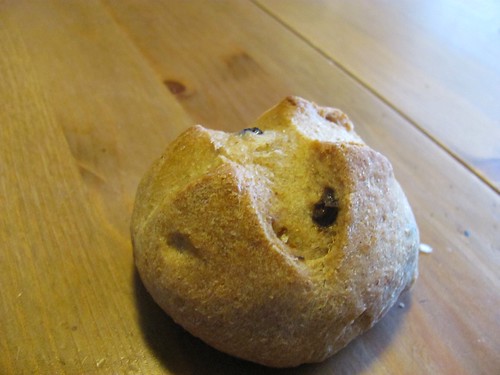 When we got home the girls had hot cross buns to fill up empty bellies. We couldn’t convince Sophie that the Mass substituted for bedtime prayers so we had to do the whole ritual including bedtime stories. Poor Ben was really fading but at least not fussing. We got them all into bed a little after 10 and then I filled the Easter baskets while gorging myself on chocolate. 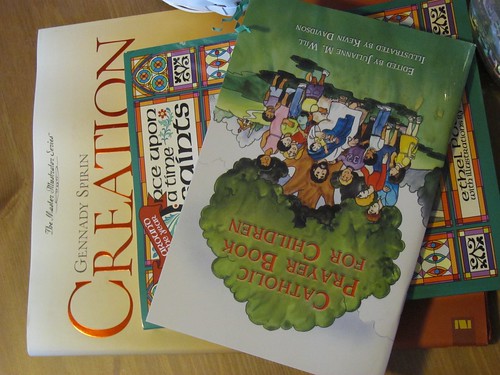 The girls woke up at six. I heard their door open and realized I’d forgotten to put out their new books with the baskets. I slipped them onto the table while Bella was still in the bathroom. I don’t think Sophie noticed the slight of hand. I told the girls not to destroy their baskets but said they could eat the M&Ms. Then went back to bed until Ben woke up about 45 minutes later. 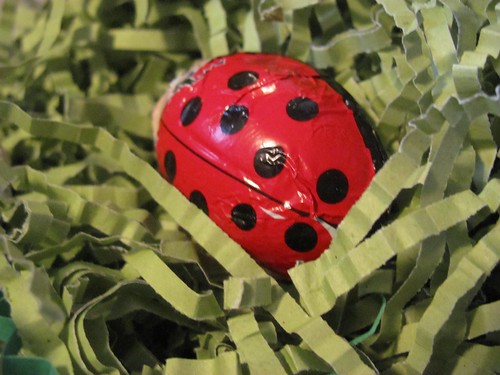 I’ve changed my plan as far as candy holidays go. I used to try to limit consumption but then we’d have candy for weeks on end. My new tactic is to let them gorge Easter morning and eat as much as they can in one go. That way even if they make themselves sick today it will be over after today After all, they were already going to be cranky from lack of sleep. Let’s just have a big binge now and then go back to moderation tomorrow. 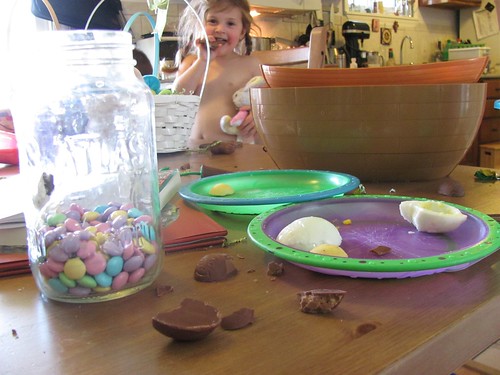 While Dom was showering and I was nursing Anthony Sophie managed to plaster one of the dining room chairs with the foil Easter egg stickers that I probably shouldn’t have bought for them but I couldn’t resist—shiny foil! 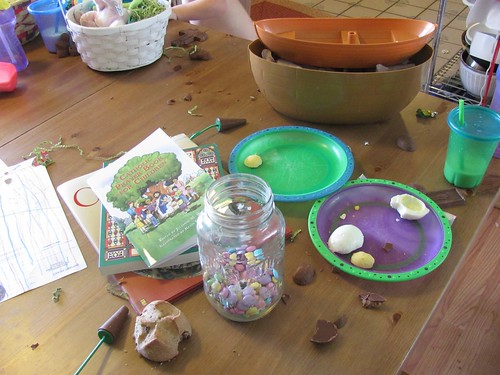 This morning it was cool and foggy. So still not a leaf was stirring on the trees. But now it is bright and sunny. All the doors are open and the children are running around barefoot in the yard. This afternoon we’ll go to Easter dinner at my sister-in-law’s. I’m so glad I don’t have to cook dinner or host a gathering.

My house is a mess. It was a disaster last night and Easter grass and candy wrappers aren’t making things any better. But I’ll worry about that tomorrow. Today, joy.