10 Facts about Me and My Better Half
1 comment
Share:FacebookTwitter
Uncategorized

10 Facts about Me and My Better Half

1. We met for the first time during Mass at the sign of peace. Then were formally introduced after Mass was over. He was the lector.

2. We were later married in the same church and our two oldest children were baptized there.

3. However before that meeting we were both at a young-adult group get together on the beach; but neither of us remembers the other being there.

4. Our first “date” was at an Irish pub. We chatted for hours over pints of Guinness, mainly about books. I didn’t know it was a date, however. The night did not end well because of mixed signals.

5. After that we only saw each other in passing for more than a year. It was awkward. Finally I got over it and started going to the bible study he was leading.

6. Our song is “Somewhere Over the Rainbow/What a Wonderful World by Israel Kamakawiwo’ole

7. It was supposed to be our first dance at our wedding; but the iPod we were using in lieu of a dj refused to cooperate. So instead we danced to “A Kiss to Build a Dream on”. Which is now also our song. 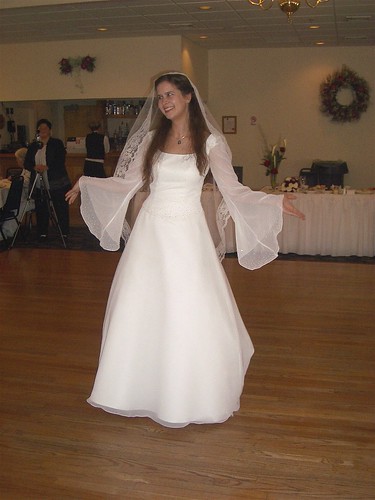 This photo (remember this photo from the wedding dress post?) is actually me waiting for Dom to figure out what was wrong with the iPod. Just standing in the middle of the dance floor while everyone watched.

9. Our first child, Isabella was a honeymoon baby. Her due date, May 13, was nine months to the day from our wedding day. (She arrived five days later.)

10. Our sixth anniversary will be this August 13. (He’ll be leaving for World Youth Day in Spain on that day.)