Babymoon: A Time to Dream 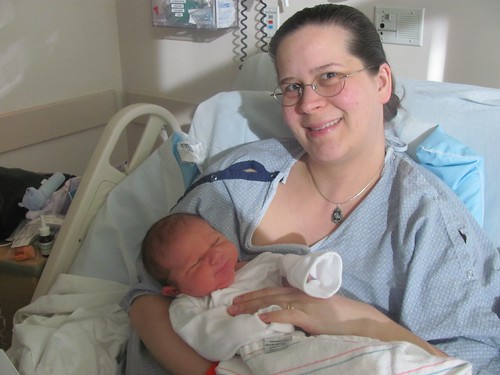 Finally got around to downloading photos from the camera. I like that Anthony and I are both smiling here.

It is so sweet to me seeing how much the children all love Anthony so.

I can’t even count how many times a day Bella comes to kiss him, caress him, just to look at him adoringly. It can feel a bit smothering to me but I try not to let my irritation show. She just wants to share her love.

Ben has been so gentle and loving too. When I get up to change his diaper, Ben comes with me and “helps” by getting a new diaper out of the basket for me. Then when I’m done, I hold Anthony down where Ben can give him a hug and a kiss. He is so tender, the way he puts his arm around the small baby, the way he gently brushes Anthony’s cheek with his lips. Sometimes not even making contact with the cheek but giving him an “air kiss”. It feels like Ben has also become more gentle with the baby dolls. He was cuddling and kissing a dolly today.

Sophie gets the sweetest look on her face when she’s doting over “Baby Amphony”… it must always be said with the “baby” tacked on to the front. So far he doesn’t have a nickname—he just doesn’t seem like a “Tony”to me—but I do find myself parroting Sophie’s mispronunciation. To me he’s as often “Amphony” as he is “Anthony”. 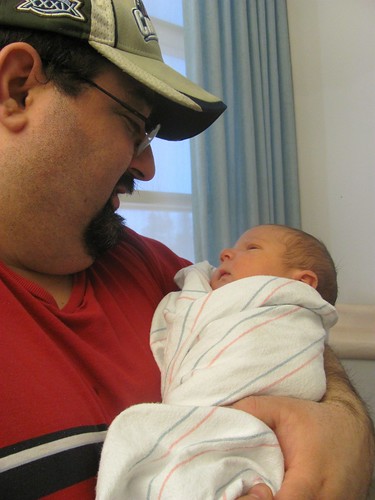 I realized last Wednesday that I didn’t yet have a photo of Dom with Anthony. Things that happen with baby #4…. with the previous children someone in the OR took Dom’s picture with the baby but this time we forgot the camera in the car so all Dom had was his iPhone.

Its funny but I find myself so caught up in the details of diapers and maintenance that I sometimes have a hard time connecting emotionally with this scrawny fussing little being who it seems is perpetually attached to my breasts. At times I’m lost in the beauty and joy of it all but at other times he just seems like this little invading alien. I am so glad of the frequent reminders to slow down and smell the baby scalp. The overflowing love the other children have for him really is contagious. 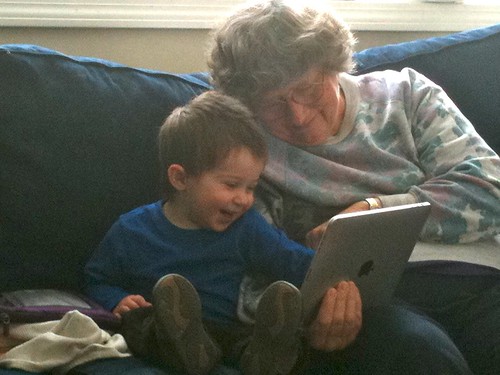 So much is going on… and so little. The tiny daily dramas fill the hours. And yet time hangs loosely. I try to read and I find myself nodding. I’ve picked up my routine so far as breakfast is concerned. I make my own oatmeal—and now sometimes some for Dom as well. And I generally get my own lunch, usually that’s just leftovers. But my mom and sister and Dom are still doing the dinner preparation and taking care of most of the other housekeeping routines. More or less. 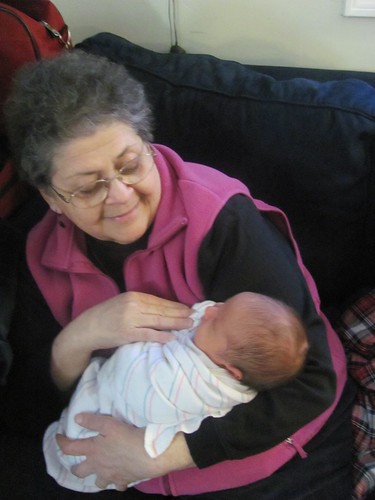 Grandma B dropped by for a visit. The nice thing about having a baby is getting to see all the relatives without the hassle of having to drive to see them. Everyone comes to our house!

What I can do now is take time to think and plan. I’m thinking about Lent and how I want to keep the season of fasting and drawing closer to the Lord. How do I want to sanctify the days and make it a season of preparation?

I’m also starting to look forward a bit to the spring and summer. I want to make a point of getting out of the house more frequently. Go to the park, go on outings to the farm and the beach.

We want to plant a garden again. For that we need to have a plan. To order seeds. Hard to imagine now with everything still buried in snow; but spring will come sooner than I know. 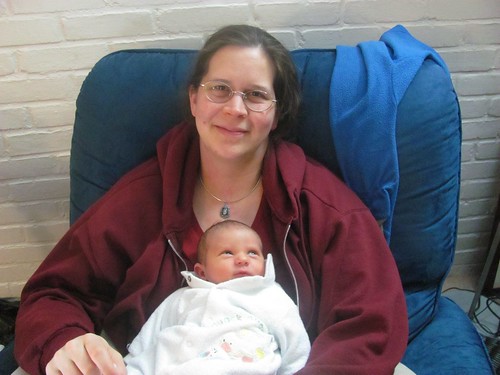 Me and my little Anthony. Dom was trying to get a picture of him completely sacked out on my chest; but of course he woke up. Murphy’s Law of babies and cameras.

I plan to spend much time this summer reading and re-reading my homeschooling books. Devising a plan that is simple and yet will be our first steps on the path to something resembling more formal homeschooling. Bella will be starting kindergarten in the fall. State law requires that I inform my local school district of my intent to homeschool. They my or may not require me to give a more detailed plan. It will be very simple. No more than an hour a day of formal planned “school”. Of course learning doesn’t only happen during “school” we’ll continue to follow all the paths of learning we’ve already been naturally following. What will change is more my own attitude. I will try to be more intentional about Bella and her learning. I will set aside time that is just for her. These will be my first attempts to begin the habits of routine that we will be following for years and years to come. Right now it seems impossible that we will ever fit schooling into our already busy days. By starting small now, we can feel our way gradually into a routine that will work for us in the future. 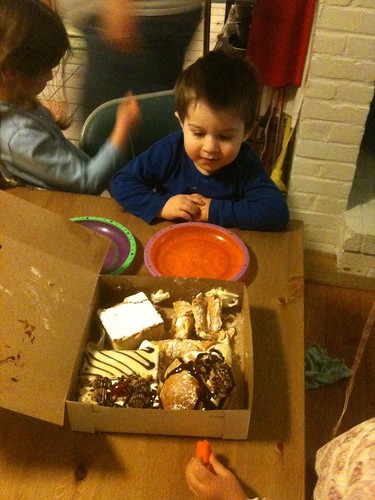 Grandma B brought pastries from Modern Pastry in Boston’s North End. What a delightful treat!!

I feel different now as a mother of four. I feel somehow like I’ve arrived. (Is it because now I finally have as many children as my own mother did?) I’m no longer the scared new mother who didn’t know what to do that first night when Bella wouldn’t stop crying, who was so panicked when my parents left and Dom and I were on our own with the baby for the first time. I laughed with one of the older nurses about that feeling of amazement that anyone would allow us to have such an awesome responsibility. This time the nurses didn’t intimidate me wen they tried to boss me around. I know myself to be a competent mother. I now what works for me and I don’t let anyone try to convince me otherwise.

I know that with this new beginning of homeschooling I will in some ways once again be that new mother; but I also know that having got Bella through the first five years that I will be able to face the challenges of this new stage with some of the wisdom of that experience. We will learn what works for us and what doesn’t and I’ll learn to trust my own judgment and not worry too much about what anyone else thinks.

Finally we’re on the threshold, the dream that began before Bella was born, when I had nothing to do but read homeschooling books and blogs all day, that dream is going to begin to become a reality. I’ll have to translate the stuff of dreams into plans and make the plans happen. A challenge to be sure also a thrilling adventure waiting to happen.