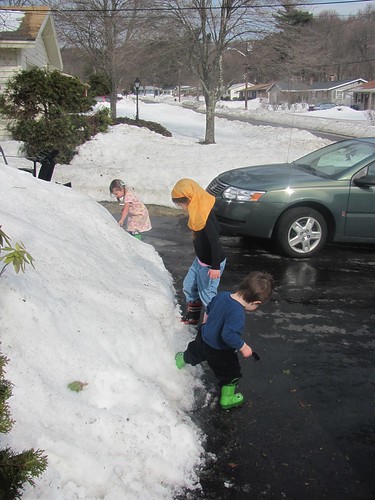 Children at work. Snowbanks exist to be kicked, don’t you know?

First, I want to say thank you to all my dear friends who have left comments and sent emails and have said prayers for me, for us, this week. I feel so calm right now, I know I am being buoyed on a supernatural cushion of prayer and love as delightful and unexpected as spring in February. 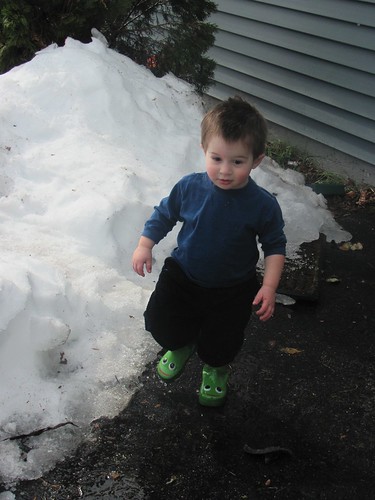 Ben in his new boots. He so wanted to wear Sophie’s yesterday and was heartbroken when I told him no. So today I brought him his very own. Oh he was thrilled! I still can’t believe how big he is.

Yesterday and today we’ve had the temperatures climb back to the 50s. And sun. And during the day a constant drip, drip, drip, drip, drip, drip, drip that is absolute music to my ears. I can see grass at the edges of the yard! There is no more snow or ice left on the roof of the shed! So when I came back from this morning’s appointment and errands, the kids and I went out today to play int he driveway in just our shirtsleeves. They wore their rain boots and stomped in the puddles in the driveway and threw fists of snow into the air. Oh joy! 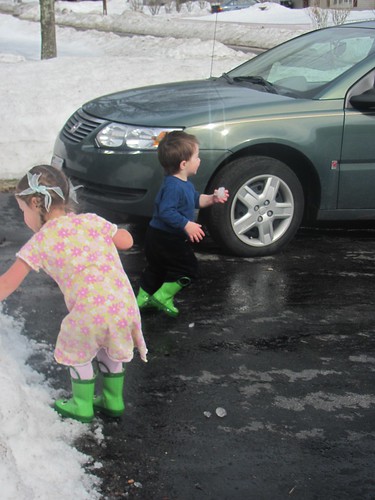 Dismantling the snowbank one fistful of snow at a time. Ben delighted in grabbing handfuls of icy snow and throwing them on the ground and was quite distressed when his hands got cold. He didn’t want to stop; he just wanted me to make the pain go away.

My mom arrives on Monday. How awesome is that? I can’t wait to see her. Hopefully the snow that’s being predicted won’t delay her flight. 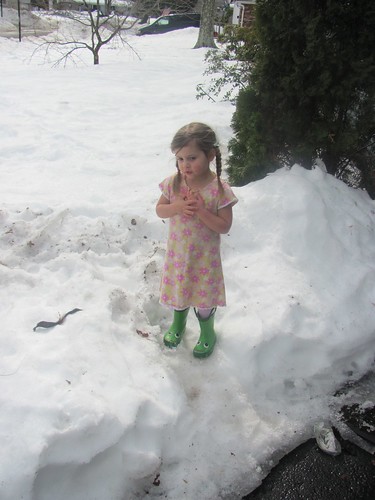 Sophie said she was too hot and so I told her to go take off her tights and put on socks instead. She went in to change. I’m two going on three, I can do it by myself! She replaced this dress with a long sleeved shirt and did not remove the tights. She was furious when I said she couldn’t come out in just a shirt and tights. Eventually she ended up with the dress back on over the long-sleeved shirt. Maybe she really meant she was cold?

Dom still has to meet with his diabetic nutritionist next week to really learn what he needs to do to change his diet and control this disease. But in the meantime I looked up some things online to get some slightly less vague ideas of what he should be eating.  And I’m throwing myself into the task of making sure I give him a good breakfast and pack his lunch and put a good dinner on the table. I’ve let things slide during this pregnancy and we haven’t been eating as healthy as we should. Not so many green things have been gracing our table of late and this has been a wake-up call for me. I don’t know how I’m going to sustain this once Anthony is here and I’m pinned down under a nursing baby for hours a day; but I’m determined to do the best I can to take care of my family’s health. 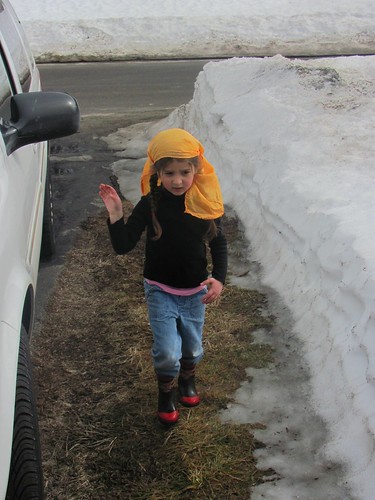 Bella had me put the head scarf on her last night before dinner and it managed to stay on overnight and even survived pulling on the turtleneck this morning. It’s one of the scarves we dyed last week. I used orange Kool-aid. I keep thinking that this is the color of the flamma, the veil that was traditionally worn by brides in ancient Rome. Odd nerdy thought of the day.

Today I went to Target and bought some last-minute nesting supplies. Boxes and bins for organizing things that I’ve been putting off for too long. Underwear and socks and tights for Bella, who has been making do with not quite enough. That sort of thing. Going a bit crazy in one final irrational hormonal surge. 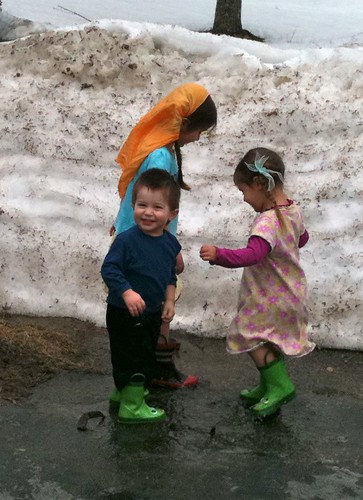 Stomping in the puddles. The world is mudluscious and puddle-wonderful and I’m listening for the little lame balloon man whistling far and wee.

On the agenda for this weekend, the final nesting surge: Get the baby stuff out of the shed: clothes, bassinet, swing, receiving blankets. This thaw will make that task so much easier! I think we might be able to open the shed doors without having to excavate with a shovel. Also: organize the huge piles of boy clothes given to me last year. Give away what we arent’ going to use. Store the rest in some semblance of order. 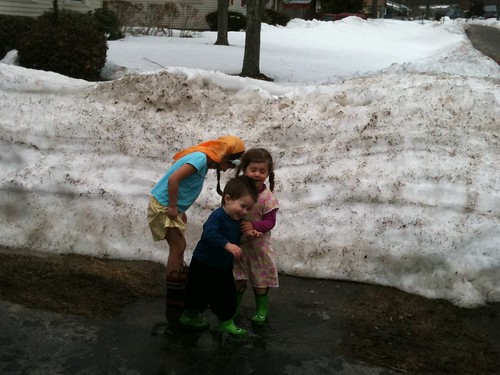 The snow looks icky dirty, but the children don’t notice. They are so happy to be outside, out in the sunlight and fresh air. Puddles! Mud! Joy!

Also: confession tomorrow. Gotta get the most important stuff sorted out even if the clothes don’t get organized and all that. And make an appointment to receive the sacrament of annointing on Wednesday if at all possible. That was such an enormous comfort last time. I know that there is no way I can do this on my own. I need supernatural graces. I’m greedy for them. 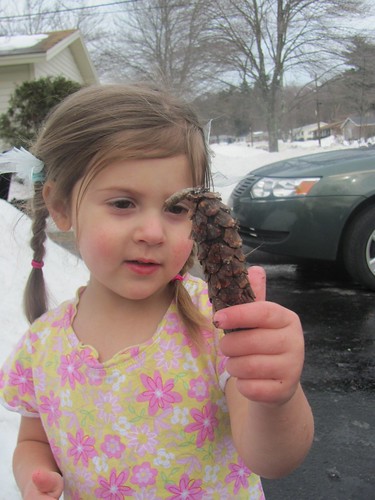 A pine cone, buried treasure unearthed by the thaw.

And all shall be well and
All manner of thing shall be well
By the purification of the motive
In the ground of our beseeching.