I’m not trying to brag about how holy my kids are. They aren’t. Trust me.

Nor about what a great teacher I am. I’m not. I scream and yell far too much for that. It’s one thing to teach them the words, another thing to teach them by my actions. The first is much less important; but it’s the part I’m good at. With God’s grace I’m working on the second part.

But I think my kids are cute and they make me smile and some of you seem to feel the same way. (Shocking.)

And also I know I’ve been inspired as a mother by seeing how other moms of young children weave their faith into their daily routines. I still cling to one short post by Suzanne Temple in which she described her routine of pointing to the crucifix and saying: “Jesus loves Micah. Micah loves Jesus.” It inspired me to do the same with Ben.

So here are a few glimpses into the way we are talking about God in the Bettinelli house these days.

And also some photos from the other day when I really had to get something done (probably go to the bathroom); but Ben was really being clingy so I asked Bella if she could read to him. And she did. And when I was done with whatever it was I was doing he was so absorbed in reading with her that he didn’t want me. Well, ok by me. 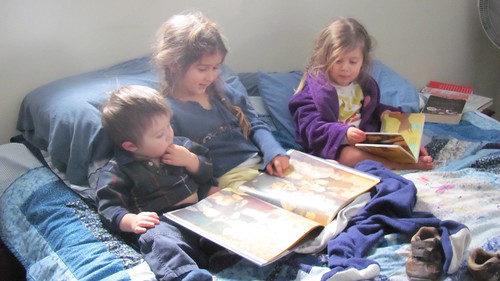 1. This morning at the breakfast table we had an impromptu catechism lesson as the girls asked: “Mama what’s a prophet?” Sophie’s been asking that question occasionally for weeks now. (It must be inspired by one of the Christmas carols we’ve been singing. Though I can’t think of which one right now, I do remember hearing or singing the words and thinking: Aha! That’s where it’s coming from.

Usually I just say that a prophet is someone who tells us about God. But today as I was stirring the oatmeal, I was inspired to answer at length.

I said: The prophets were men who told people about God. God gave them a special message to let people know how much He loves them so that people can know who God is and so that people can love God. I listed out a bunch of the prophets: Isaiah, Ezekiel, Amos, Habakkuk, Elijah, Elisha, Jonah (just like the story in your Bible book).

Many of the prophets also told people that Jesus was coming so they could get ready for him. Just like Mama and Daddy will tell you when Grandma is going to come for a visit so you can know what’s going to happen and you get all excited and we get ready for her to come.

Isaiah said: The people who walked in darkness have seen a great light. Who is the light? Bella answered excitedly, throwing her arms into the air: “Jesus!!!” Isaiah also said: A virgin shall have a child. Who is the virgin? Bella: “Mary!!!” And who is her child? “Jesus!!!”

Lesson adjourned. Give the pupils an A.

And give thanks to the Great Teacher, the Holy Spirit, who inspires sleepy mommies early in the morning. 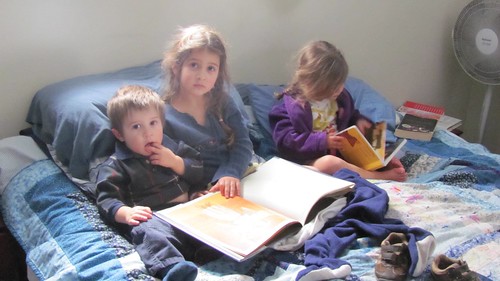 2. Heard from the other room: “So, blood and water came out from Jesus’ heart.” Bella instructing her sister. 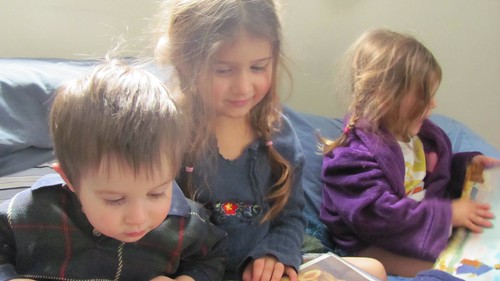 3.  Bella was pretending to eat the sheep from the Nativity. Nibbling delicately at their legs as if they were a delicacy. Then she pretended to eat baby Jesus. She told me she was pretending he was a sheep too. Eucharistic theology from a four year-old. 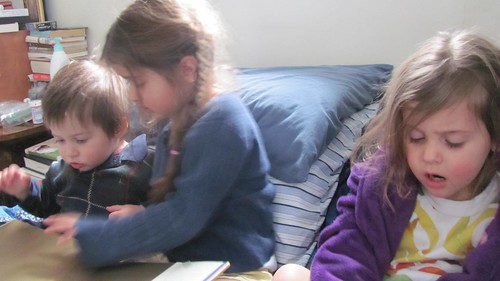 4. Bella, looking at her slice of bread and butter: “Whose bread is this? I think I know. His house is in the village though.”

Ok, not really catechetical, just a fun play on Frost. But Dom read it right after the previous one and commented that Bethlehem means house of bread. So we stretched a sort of Eucharistic connection. 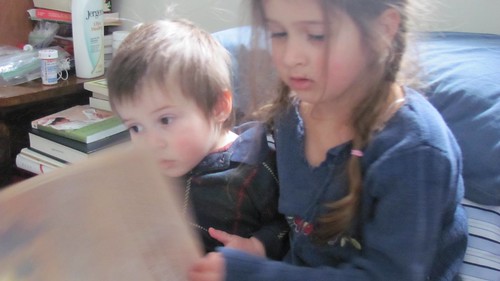 5. Sophie: “My king is a sad king because he can’t find Baby Jesus.” 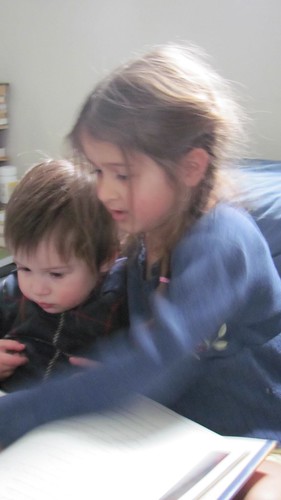 6. Also, when we went to story time at the library on Wednesday we got there a little early. I overheard Sophie and Bella chatting with the librarian, Miss Elizabeth. They were telling her all about their Christmas. Among the highlights were their new dresses and going to Mass and singing Christmas carols. And Sophie just had to tell her all about going to “Goodnight Mass.”

Two weeks later and Sophie is still gushing about Midnight Mass. I am so very glad we took the risk and went. 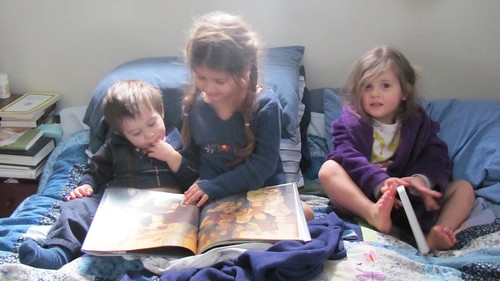 7. I’ve been loving watching the girls play with the nativity figures. This week the barnyard animals got in on the action. Bella designated the shelf under the coffee table as the pig’s house. The kneeler was the horses’ house. The baby horse was called Sly and the mama horse was alled Slyer. So all week she kept talking about everyone going to Slyer’s house.

I snapped a few photos of one of the dinner parties that Bella was throwing for them. 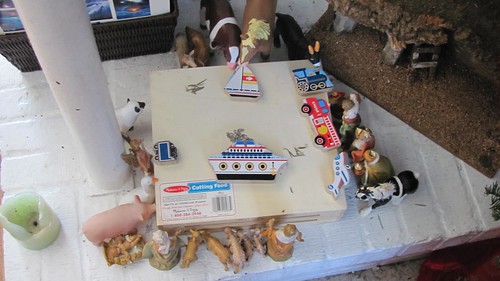 The overturned box was the table, the puzzle pieces were cakes, I think. Everyone was gathered around having a wonderful time. 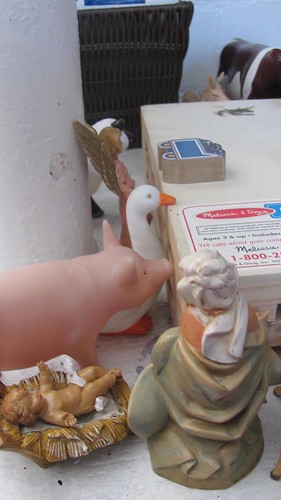 I especially love the angel standing against the column between the sheep and the goose. I’m glad Mary is right there to help feed baby Jesus. 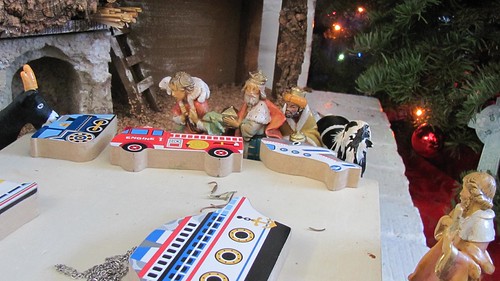 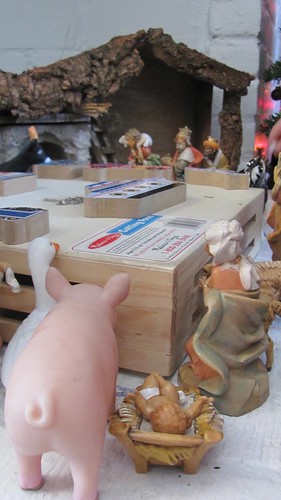 For more quick takes, visit Jennifer at Conversion Diary. And even if you don’t visit, offer up some prayers for Jen, who’s been having regular pain in her legs for a while now. Since her clotting disorder puts her at an increased risk for DVT (Deep Vein Thrombosis), her doctor thought it would be best for her to head to the hospital for an emergency ultrasound of her legs.