St Anthony and the Snowy Day 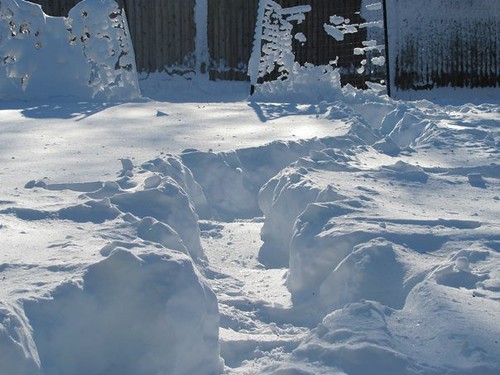 Dom had a snow day yesterday. Spent most of the morning clearing out the driveway. So today was his first day back at work. As he was getting ready to go, he asked me for his wallet.

On Sunday we stopped by the grocery store after Mass (along with at least half the other residents in our town, a blizzard following on the heels of a holiday has that effect) to get milk, juice, eggs, and a birthday cake for my sister, whose plans for the day had been canceled by the impending blizzard. He’d handed me his wallet so I wouldn’t have to dig around in the diaper bag for mine.

After standing in the express line for more than twenty minutes, I finally paid and hurried out of the store, shoving the wallet into my coat pocket. I climbed into the car and was relieved to see that the only one in tears was Dom, who’d had to suffer through an interminable game of “That’s not Mama” as the girls watched person after person emerge from the store. And I was filled with remorse that I hadn’t had the foresight to just go to the store with my sister (she drove to Mass in a separate car) while he brought the kids home to feed them.

Monday of course he didn’t need it as we didn’t leave the house all day. I went out to play in the yard with the kids. Still I didn’t remember the wallet I’d shoved in my coat pocket.

So then this morning he asks for it and I can’t produce it. There was some wailing and gnashing of teeth. We turned out my pockets, searched the car, the couch cushions, the bottom of the coat closet. The wallet was gone. Did it abandon ship in the grocery store parking lot? Was it lost in a snowbank in the backyard? Did Ben wander off with it and hide it in the kids’ room? We had no idea. I called the grocery store. No luck. Dom went on to work, taking the risk of driving without the wallet.

We sent up fervent prayers to St Anthony, even promising to name our next child Anthony. (That’s a bit of a joke because we’ve pretty much already decided on Anthony for the baby.)

I had a bit of a hunch and put on my boots and coat and went to search the yard. I had this clear image of myself standing over by the garden beds. It felt like an answer to the prayer. But I tromped there and all over the snowy yard and all I gained were sore legs. I gave up and went to CVS to pick up my much needed prescriptions that had run out over the weekend.

Then while I was taking an afternoon nap Bella decided to go out to play in the snow. She spotted something brown in the snow over near the garden trellis and started to dig. And she found the lost wallet! I was looking in the right place, but just didn’t see it.

She’s very reluctant to share credit for her find with St Anthony. I guess it’s hard when you’re four to understand how answers to prayers often feel like we’re doing it all on our own. Still, I’m convinced that her seeking and finding were the answer to our fervent prayers. Thank you, St Anthony! To be sure, we did give Bella plenty of praise, though. And Dom gave her a huge hug when he got home. Unfortunately, he’d already called to cancel all the credit cards. So we’re not really headache free.

Another funny St Anthony tie in– Jennifer of Conversion Diary has created a nifty program, a saint’s name generator that will pick a patron saint for you to get to know in the new year. Mine just happened to be… That’s right, St Anthony of Padua.