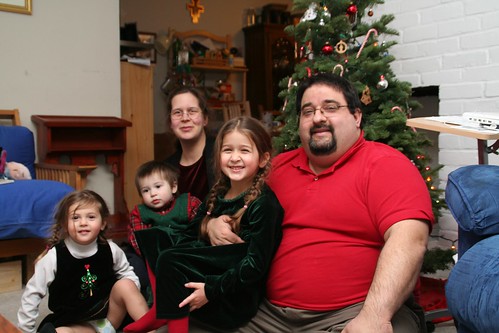 Christmas Eve was a whirlwind for me. The house was a mess after a week where every day brought new errands. So I vacuumed and did about eight loads of laundry. 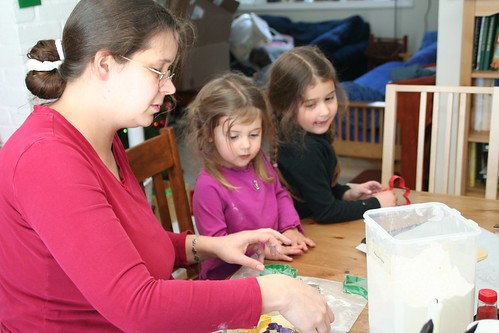 The girls and I made sugar cookies. (I opted for sprinkles rather than icing. Much less mess to contain as I was going back and forth from the laundry to the dishes to the cookies. During nap time I wrapped some of the presents. 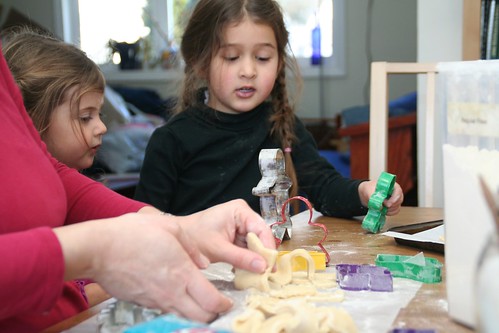 We had our traditional Christmas Eve dinner. Our own twist on the traditional Sicilian feast of the seven fishes. We don’t actually try to do seven. Maybe when the kids are older but mostly it’s just Dom and I eating the kids hardly eat enough to count and leftover fish doesn’t really keep well. We had lobsters and steamers (that’s clams for those of you who are not New Englanders), and broiled shrimp. 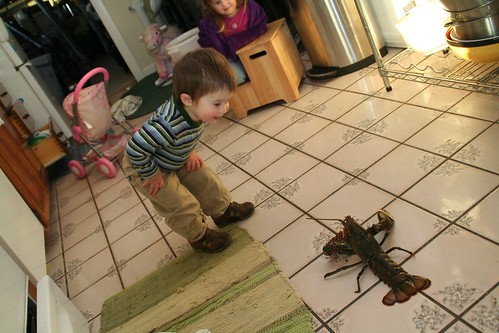 I’d bought some smoked salmon but forgot to serve it. However, it made a lovely Christmas Day lunch when I was too busy preparing Christmas dinner to cook anything for Dom and myself. I just squeezed on some lemon juice and garnished it with fresh ground pepper and chopped scallions. Yum! 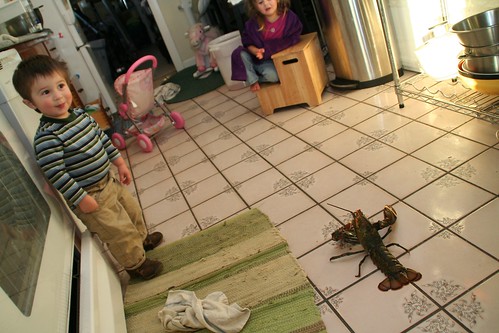 We put the kids to bed early and then I wrapped more presents. And then laid down for a very brief rest. At 10:30 or so we woke up the kids to start getting ready for Midnight Mass. This was either going to work beautifully or be a complete disaster but we were willing to gamble. Actually I only had to wake Sophie and Ben. Bella was so excited she couldn’t really sleep but kept popping up. Finally Dom let her sit with him to watch It’s a Wonderful Life. 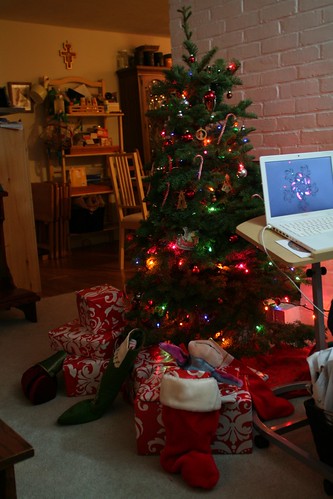 Ben was cranky as you’d expect but Sophie was excited and got dressed eagerly in her new Christmas dress. It took less time to get all three children ready than we’d anticipated and we were ready to go by 11:15. So we drove around the neighborhood and looked at the lights. We got to the church at about 11:30 and found maybe a dozen cars there. We received friendly greetings as we made our way into the dimly lit church. Several people told us, “You’re very brave!” We got seats in the very front row. While we waited for Mass to begin Father came and greeted us, saying hello to each of the children. Soon the choir began to sing Christmas carols and the girls joined in with their favorite songs.

Father began Mass by chanting the Christmas Proclamation. Oh how I love it!

I love how it places the birth of Christ in time, beginning with the creation of the world and of man and woman made in God’s likeness. I love how it refers both to the place of the nativity in the history of God’s plan for salvation and in the reckoning of time by the secular world. Somehow my breath always catches the most at the dating of the Olympiad and the years from the founding of the city of Rome. This isn’t just a pretty fable, as it is sometimes easy for me to think of Bible stories. This is real. This is history. It really happened in a specific time and place. 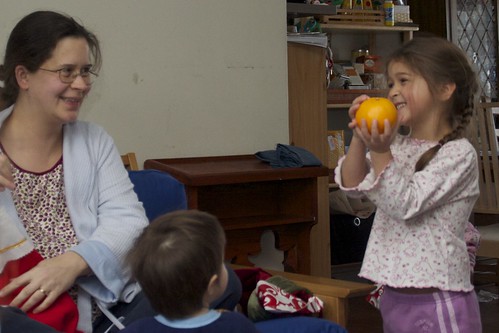 Mass was beautiful, of course. I love the blaze of poinsettias crowding the sanctuary. I love it when we genuflect during the recitation of the creed. I love singing Come All Ye Faithful and Joy to the World. I love the way the church blazes with light in the darkness when suddenly all the lights switch on during that first hymn as Mass begins. Most of all, perhaps, I loved seeing the same awe and wonder I feel reflected in my daughters’ eyes. I have never seen Bella’s eyes shining so brightly. I’ve never heard them singing so sweetly or so intent on the Mass. Today as we prepared to go to Mass Sophie even asked me if we could go to the special night Mass again. 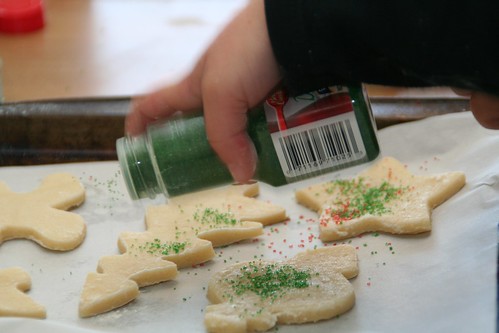 I was sort of hoping Sophie and Ben might sleep a bit during the Mass but it didn’t happen. She was happy and sweet the whole time, even if she did rub her eyes a few times. Ben was content for a while, moving back and forth between his favorite Auntie, his daddy and me. Near the end he started to get tired and cranky. He pulled off one shoe and sock and wasn’t really happy about his foot being bare but wouldn’t let us put them back on. He did start to cry and call for me when he saw me still in the communion line after Dom had already returned to the pew. Poor little boy. Still, at the end of Mass everyone commented on how well behaved they were. 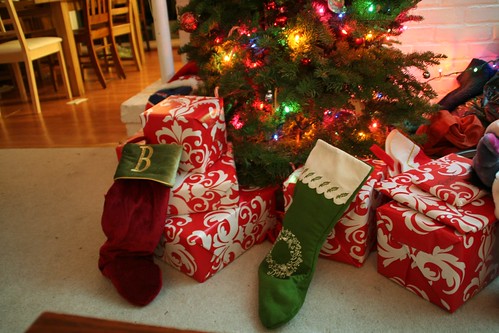 When we returned home at about 1:30 everyone had sugar cookies and then we wrangled the children back to bed. Sophie was overwrought and cried herself to sleep. Bella just crawled into bed and went out. Ben didn’t want to go to bed exactly; but was asleep pretty quickly. They woke us up at a quarter to 8. Not too shabby. I was remarkably alert considering I wasn’t able to get to sleep till about 3:30. A combination of putting out the presents and stockings and my usual night owl tendencies which make it hard for me to unwind. I found myself reading in bed a bit. Funny how at 3 am I can read and read and read and no matter how tired I am I won’t fall asleep over my book while in the afternoon there is nothing that will keep me awake, no matter how good the book. 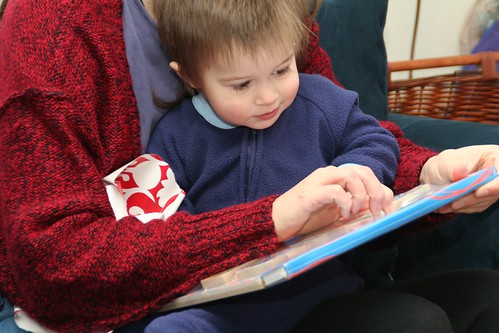 Anyway, the children were so very excited on Christmas morning as children will be. I was much saner at 8 with only four hours of sleep than I would have been at 5 or 6 with more sleep. Bella was thrilled to get the pots and pans for her play kitchen—the first thing she’s ever requested from Santa. Ben was over the moon about his little car carrier trailer truck with folding ramp that came with four cars. He played with it intently for more than an hour. 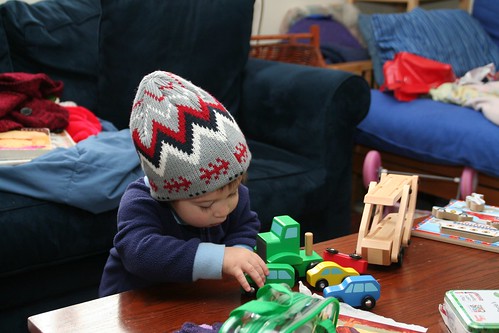 Sophie was less satisfied with her presents. I sort of knew she would be. I didn’t know what would make her light up in the same way that Ben’s and Bella’s presents did for them. However, she later did seem rather satisfied with her new dolly, a rag doll similar to Bella’s. She christened the doll Lisa, just like Bella’s and spent time pushing it around in the stroller. 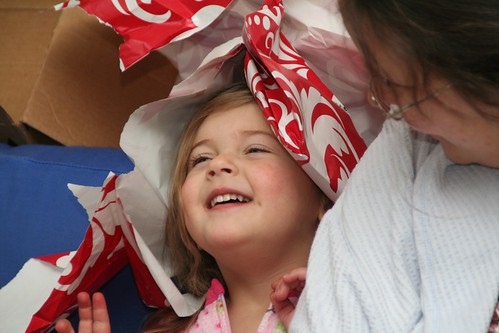 I let the children eat chocolate and none of them wanted to eat any breakfast. I spent most of the morning preparing food to take to the family’s Christmas dinner. I made a festive Christmas salad with pineapple, oranges, apples, bananas, pomegranate, and a pomegranate dressing. I baked a loaf of bread (Thanks, Artisan Bread in Five Minutes a Day!) I also made a veggie platter with an avocado chipotle sour cream dip.

We put the children down for naps early. I got maybe a half hour rest before we had to depart. 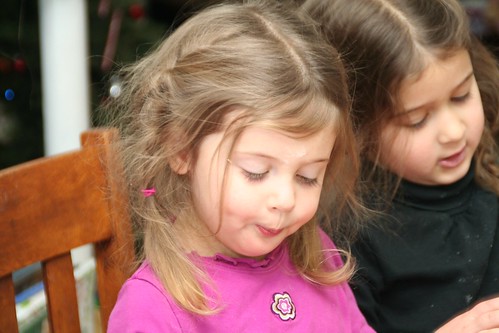 Christmas with the Bettinelli clan is joyful, noisy chaos. With lots of food. There was lasagna and eggplant parmigiana, meatballs, a ham and a turkey, olives and cheeses, creamed spinach casserole, cannoli, peanut butter trifle, apple and pumpkin pie and I can’t remember what all else. It was all so very good. There were 14 children making the kind of noise you’d expect, two more will be there by next Christmas as my sister-in-law and I are both expecting. Oh a wonderful time. I couldn’t get Bella to eat more than three bites the whole day—she was just too distracted by all the cousins and toys—and come time to leave she was in tears and cried the whole way home because she was so hungry. Poor Ben hardly ate either, though that was mostly on account of his two molars coming in. Sophie and Dom and I made up for the both of them, though. 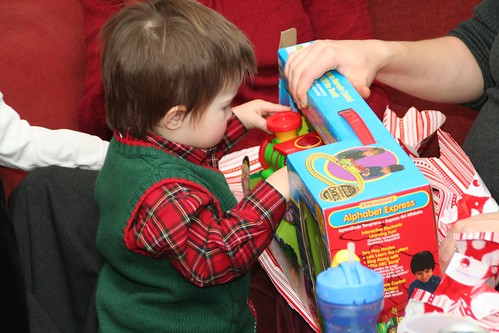 When we got home Sophie, who had fallen asleep in the car, hardly woke. She went right to bed and slept the whole night through. Ben and Bella both ate some pb&j and drank some milk and filled their little bellies. Ben wanted to play with his trucks some more; but I insisted that he go to bed. I finally got him to retire with a Goodnight Moon-style litany that ended with a goodnight to the two toy trucks he was clutching in his hands. 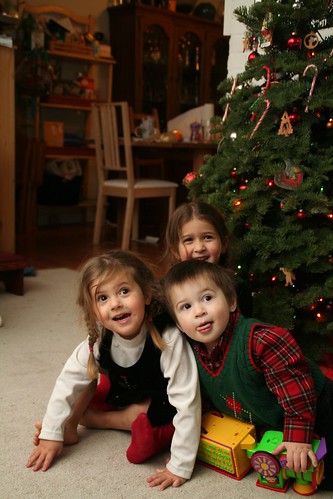 Dom and I fell into bed by 10:30. We slept until 7 this morning. Sleep, glorious sleep! Mass this morning was beautiful. I love the feast of the Holy Family. Today is a big festive day in our family. It’s my little sister’s birthday (Happy birthday, Auntie Tree!!!) and my little brother’s name day (Happy St Stephen’s Day!) and the anniversary of my baptism. I told Father after Mass and he gave Theresa a special birthday blessing. So beautiful. 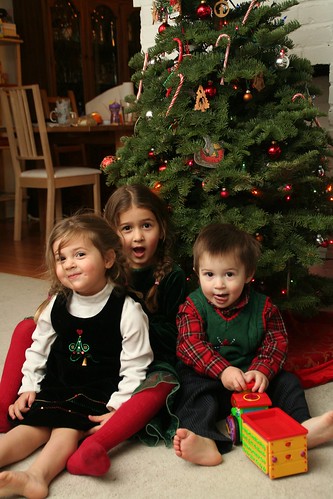 Now we’re in the midst of a blizzard. It started snowing before we went to Mass this morning and hasn’t let up all day. So far we’ve got about 8 inches and are expecting as much as another 10. After Mass we went to the grocery store to get milk, eggs, juice and a cake for my sister, whose date for tonight she had to cancel due to the expected weather. Most of the town was there, it seemed. The lines circled all the way to the back of the store because no one was directing traffic. Fortunately I only had to stand in line for maybe 20 minutes in the express line they’d opened at the service desk. 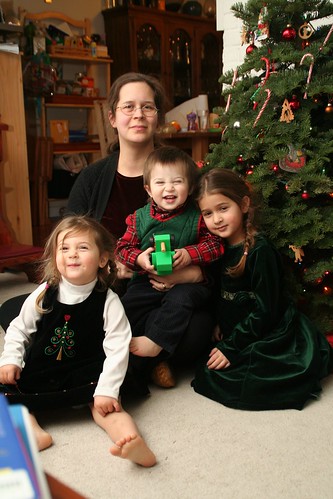 We had a cozy day indoors. Ben, Sophie and I took long naps. I didn’t expect I’d need one after getting more than 8 hours last night; but I soon fell asleep over my book (Louis de Wohl’s novel of the life of St. Francis of Assisi, The Joyful Beggar.

We had potato leek soup for dinner and the Boston Cream pie for dessert. A joyful end to a blessed weekend. But still more Christmas to look forward to. And tomorrow Dom will get a snow day… 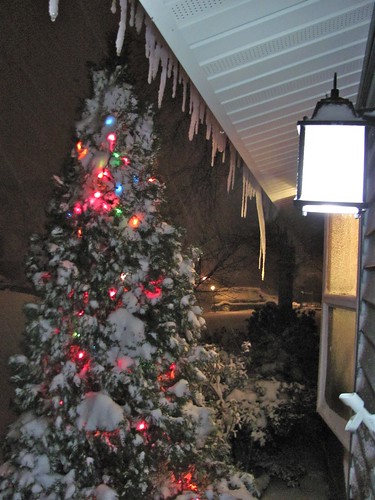 Blessed feast to everyone. May the peace and joy of the Christ child be with all of you. 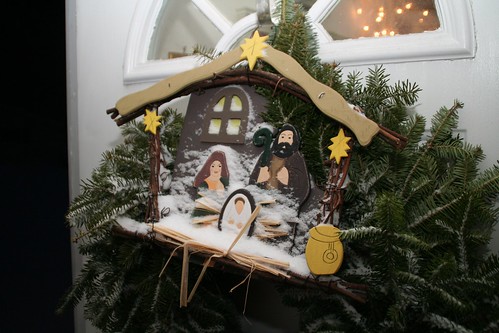