Chrismas Lights at Our Lady of La Salette Shrine

Tomorrow is my mother-in-law’s birthday (Happy birthday, Mum B!!!) and so last night the family gathered to celebrate at Our Lady of La Salette shrine in Attleboro. It was a last minute plan organized by my sister-in-law Evy.

Now I don’t deal well with last minute anythings. I hate surprises and do not change directions quickly. I am not a very spontaneous person. Dom knows better than to ever surprise me with tickets to “go away this weekend”. However, for my mother-in-law I managed to wrap my head around the change in plans and so we bundled all the kids up well and did dinner on the fly and met up with everyone at the Shrine for birthday cake and magical evening with the lights.

I’d never been to La Salette before; but I thought I knew what to expect. However, as we pulled into the parking lot I was amazed at the lights. None of Dom’s pictures do them justice. I don’t think any photo could. There were just so many of them. The sheer scope blew me away. 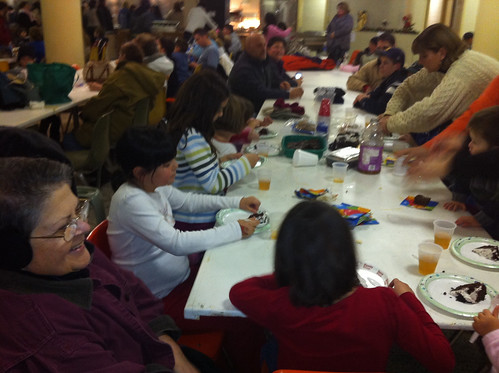 It was a wonderful evening. Thirteen children between the ages of 16 and 10 months and eight adults sat down in the crowded cafeteria and sang happy birthday and ate a festive dessert. Lots of gingerbread, chocolate cake, and chocolate chip cookies washed down with apple cider. Then back out into the cold to wander the lights.

Of course these aren’t just pretty lights. There are angels and nativity scenes, stations of the cross, and a rosary. There was a real donkey, which was a huge hit with the kids of course. 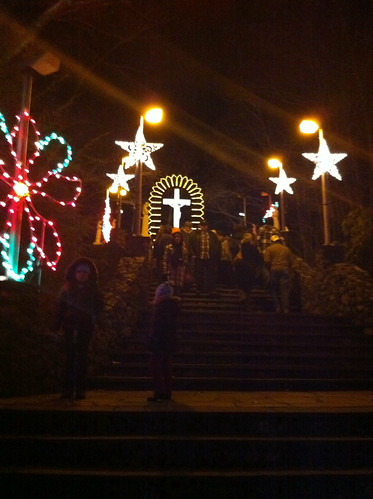 At her own very strong insistence, Sophie joined me in climbing both sets of stairs. One recreated the apparition of Our Lady to Maximin Giraud and Melanie Mathieu, two shepherd children, at La Salette in the French Alps, on September 19, 1846. The other led up to a beautiful representation of the Crucifixion.

Bella, much more adventuresome, climbed the stairs with some of her older cousins. 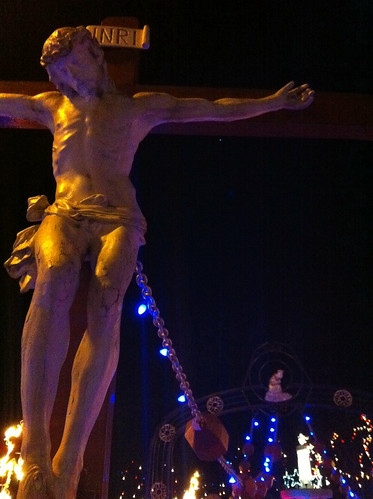 My favorite was this enormous rosary. Here’s the crucifix, you can see the beads at the bottom right. The beads are about 2 foot diameter and they make a loop, a full fifteen decade rosary, around a little island that juts into the pond. Around the pond is a walkway with all the mysteries of the Rosary.

So as much as I hate spontaneity, I have to admit that in this case it was not only a great time but also a completely unexpected answer to a prayer I hardly knew I’d made. See, I woke up Saturday morning with the sudden realization that I’d messed up. I’d planned to order this particular St Nicholas book on Amazon to wrap and put with the gold coins this morning. But I forgot to actually order it. And Saturday morning I realized it was too late. It was actually a bit strange how it just popped into my head as I lay there in bed. I was very annoyed at myself; but I shrugged it off and figured we’d just re-read the book I bought the girls last year and no one but me would know there was supposed to be a new book this year.

Then as we were heading out the door Dom mentioned, “You know, La Salette has an enormous Catholic bookstore.” Sure enough there was one picture book life of St Nicholas. I bought it and I also got each of the kids a holy card with a lovely Madonna and Child.

The kids were all thrilled this morning. The book was a hit. And now after a late night last night and spending all day cooking the turkey dinner I’d planned for Sunday I am really wiped out and am going to bed. Goodnight, all.