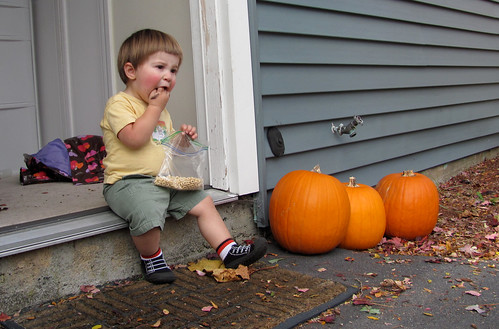 Ben with pumpkins before they were carved.

Today, among other things, we carved our pumpkins. I didn’t get any photos during the process as I was up to my elbows in pumpkin guts. But Dom did put together the following video.

I was a little nervous about this activity as there isn’t actually much for the little ones to do. But I tried to make it as interactive as possible. I let Bella and Sophie choose the shapes for the eyes, nose, and mouth and then I cut them out. I let them help scoop out the guts.

They weren’t actually much help, of course; but boy did they have fun and I don’t think they noticed at all how little of the work they actually did. Bella picked out seeds from her pumpkin and put them into a bowl. After a while I helped her with the remaining seeds and then scooped out all the pulp.

Sophie gave up on her pumpkin fairly quickly and began to play with the bowl of seeds. She used her spoon to stir it and made “soup”. Bella eventually joined in and pretended to add salt and pepper and more water to the soup.

Ben’s contribution to the activity was mostly to be distressed by the newspapers on the floor and by the bits of pumpkin on his hands. He also fetched spoons and straws and sippy cup lids from the drawers and threw them into the bowl of pumpkin seeds. 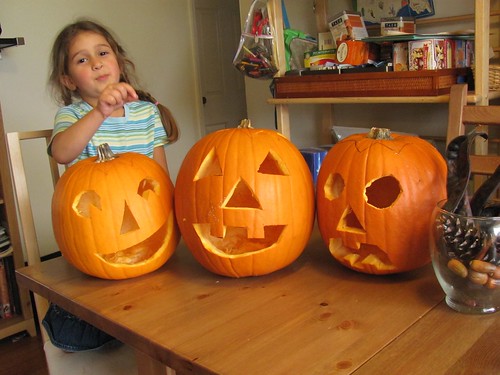 I think they came out pretty well, if I do say so myself. 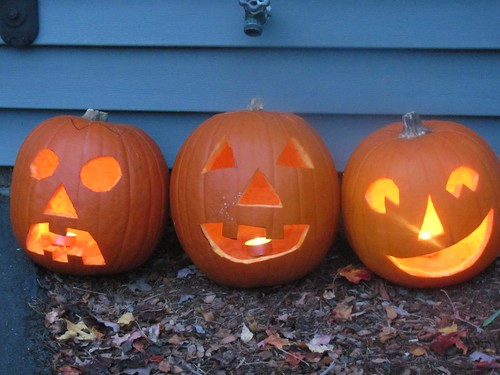 I followed up this horrific activity with an experiment in cutting Dom’s hair for the first time with the new clippers we just bought. Even with him guiding me and choosing the clipper attachments, it came out much shorter than he usually wears it. At least it will grow back in.