In the Eye of the Storm: Benedict and Blessed Pier Giorgio
5 comments
Share:FacebookTwitter
Benedict

In the Eye of the Storm: Benedict and Blessed Pier Giorgio 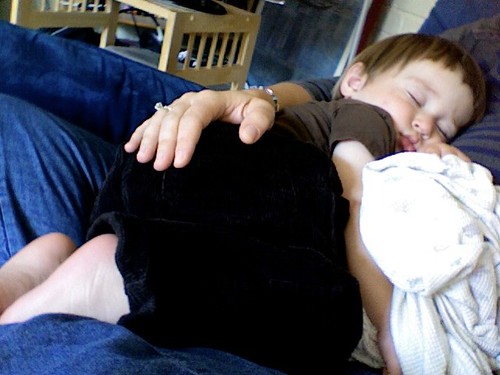 Photo taken with Photo Booth on my MacBook

Poor miserable teething Ben just cried himself to sleep on my lap. Now he’s all curled up sweet and sniffling on my chest. I love the way a baby will continue to snuffle after he’s fallen asleep crying.

My stubborn little guy usually refuses to take anything for his pain. Yesterday he took some ibuprofen three times. That’s how I knew he was really hurting. Still, this morning he screamed and screamed and would not take anything. I asked him if he wanted something and he just screamed more.

I’ll confess I was running out of patience. He woke up screaming at 1:30 and it took me almost an hour to resettle him. Then he woke again before 6 and would not be resettled. Thankfully Dom got up with him and the others and I got to sleep till 8. (Have I mentioned my husband is a hero? Waking up early on a Saturday just for me!)

When he had a major meltdown and was rubbing his eyes, I tried to put Ben down for a morning nap and he just screamed. He didn’t stop screaming when I held him either but the volume was a little bit less than when I wasn’t holding him. I was trying to get a loaf of bread in the oven—eventually Dom took it over and I just sat down in my chair. Any attention paid to him just made Ben scream more and frustrated both of us so I put him on my lap and then ignored him and surfed around on the net.

Soon the cries became quieter and less frequent. Eventually I realized he’d curled himself up and was drifting off to sleep. I let him just sleep there. I was afraid if I tried to move him he’d wake up again. There have only been a handful of times that he’s fallen asleep in my lap since he overnight weaned himself back in July. (And before that he didn’t fall asleep while nursing all that regularly either. Maybe that was a factor in the early weaning?) It’s sweet to have his little sleeping body snuggled in my arms, to just sit and relax knowing I’m doing the most important thing I could possibly be doing by just holding him, being there for him.

I’ve been reading an account of the last days of Pier Giorgio Frassati by his sister Luciana and one of the things she repeats constantly is how unaware the family was of him in his illness. How they sent a servant to sit with him while they went about their daily life. They were not present to him, did not comfort him. They did not realize how much he was in need of comfort because they all thought he just had the flu. It made me think of how I can be distant from my children and not comfort them in their need. Ben is especially hard because it is so hard to tell if my physical presence is comforting or not. When he’s in a rage or feeling bad he writhes and arches his back and screams so that it is hard to tell if he wants me to hold him or to put him down. And sometimes I get so frustrated with the screaming and writhing and kicking and pinching that I just put him down and even have walked away from him while his screams increased in volume.

What a sacrifice it can be to be present to someone in need when they can’t tell you what they want, what they need. I get so frustrated being unable to guess how to help him and everything I offer, even the act of offering, just seems to enrage him more. I guess I’ve found a new patron saint for that frustration. I did feel much more able to deal with the screaming that I have in a while, the reminder of how a soul in need might hide that need so that even his closest family members don’t see it was one I very much needed.

Dom has had a devotion to Blessed Pier Giorgio since long before we met He hosted the first English language website dedicated to Pier Giorgio and was even in contact with his sister niece and received a holy card with a relic, which is enshrined on our family’s prayer shelf. But this is the first time I’ve sat down to read one of the books on his life, to really get to know more about him, though of course I knew his life in rough outline. As is almost always the case, reading the story makes him present to me so much more and now I feel the possibility of a devotion growing in myself as well.

Ben slept for about an hour in my arms and then woke up and screamed some more. That little nap in my lap was the calm eye of Hurricane Ben. I finally got him to eat some toast and strawberries. Or rather Dom did while I made everyone’s lunch. Then more screaming as he got tired again. I finally got him calmed down with forcing my Oragel coated finger into his protesting mouth. A minute later he was happily reading his truck book on my lap. I thought I could get him to go to sleep after that but it took much more struggle, including letting him cry alone in his crib for five minutes before I finally induced him to take some ibuprofen for the pain. Then he did finally give in and go to sleep.

Poor baby. When his mouth hurts he doesn’t eat and it makes him even more cranky. I so wish he was still nursing; but I’ve long since realized that it was his decision. He is very strong willed and I fear that when this new baby comes Ben is going to take it hard. We never really had jealousy issues with either of the girls, though Sophie did regress a bit and got very clingy and needy after Ben was born. But I suspect Ben will get angry and have a much more difficult transition.