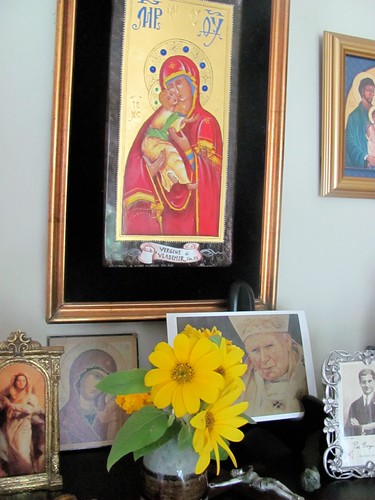 Before I got out of bed this morning, I flipped on my iPod to say my morning prayers. I didn’t get very far before the horde descended. But at least it was a reminder about today’s joyous feast. I was able to tell Isabella: “Today’s is Holy Mary’s birthday!” Oh the wonderful light and wonder in her eyes! Mary is Isabella’s hero. To be able to celebrate her birthday is a little bit of magic. Thanks be to God for the grace of those quiet moments of prayer and the ability to get a jump on today’s feast. (I wish we’d been able to get to Mass; but well, I guess I can’t do everything.)

After I got dressed, the girls and I went out and picked a bunch of our sunflowers. We put them in vases for Mother Mary’s birthday. Later we went back and added some marigolds too.

We did finish our morning prayers after breakfast. The girls and Ben all on my bed with me as I recited the prayers. They didn’t participate much; but at least we were together. And there wasn’t too much squabbling. I just had to stop the girls kicking each other about a dozen times, that’s all.

This morning was grocery day. I was starting to feel like Old Mother Hubbard. While we were walking down the aisle with the baking goods so that I could get baking powder and muffin papers, Isabella started planning Sophie’s birthday cake: “Can we get sprinkles for Sophie’s birthday cake?” I had to explain that Sophie’s birthday is in March, a long time away. But then when we got to the bakery, I went ahead and splurged on a 5 inch chocolate cake with sprinkles. The girls were thrilled. We’ll have a nice treat after dinner. 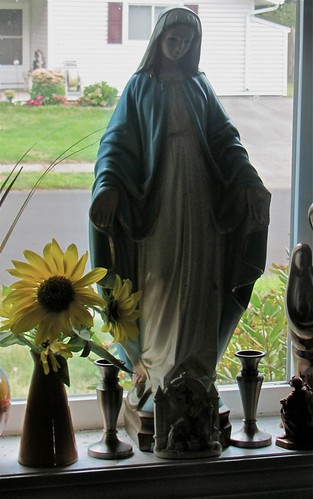 I’ve been playing my Mary playlist all day, since right after I came in with the sunflowers. It’s a collection of all the Marian hymns, songs, etc. from my iTunes library. I originally began to compile it last year on the Feast of the Annunciation and at that time I posted my list on the blog. I’ve since added quite a bit more so I thought I’d publish my updated list. I just love listening to this music. It fills my home with Mary’s serenity. And reminds me to pray, too.

An English Ladymass by Anonymous 4

Heinrich Ignaz Franz von Biber Rosary Sonatas performed by Pavlo Beznosiuk
(Unfortunately, I only have disk 1 for some reason. I’m missing the last of the Sorrowful Mysteries and all of the Glorious Mysteries.)

Ave Maria
by Chole Agnew
from the album Celtic Woman

The Waltz of the Sorrowful Mysteries
by L’Angelus
from the album Ca C’Est Bon!