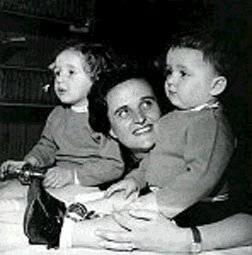 This passage really struck me when I was reading. Sadly, some pro-lifers don’t know how to respond with compassion to women who are struggling and tempted to abortion. I loved how St Gianna was so passionate about the sanctity of life and yet so compassionate toward the women she treated as well.

I am also amazed again at how she sees her patients as more than just bodies to be treated. To her they were always precious souls beloved by God who she tried to help find their way to him.

If only we had more Catholic doctors like St Gianna!

She would have long discussions with mothers not only about the best way to raise their children, but also about the absolute value of life. She suffered deeply whenever she met a woman who wanted to have an abortion. “It is a sin against God,” she would plead. “Life is sacred.”

While she was still attending medical school, Gianna wrote she would make every effort “not to judge” those she encountered. Gianna understood that the benefits she had received in her life—growing up in an atmosphere of deep faith—was not everyone’s experience. Now, her work as a doctor put her in a position to practice her earlier resolution.

No one who met Gianna experienced any trace of intolerance or condemnation, because she strove to make her actions consistent with her beliefs. [. . .] She did not concern herself only with a patient’s physical well being, but she was always as interested in their personal situations.

In Gianna’s day, as is so frequently the case today, many women turned to abortion to deal with an unwanted pregnancy. Gianna profoundly believed in the sacred value of every human life. No matter what the scenario, when a choice had to be made she did not hesitate to choose life, so deep was her conviction. Yet, despite her firm beliefs, she never presumed to set herself up as a judge of those women who did not have the same principles or determination.

When her patients considered the possibility of abortion, Gianna suffered tremendously. While consistently defending the right to life of every human being from the first moment of its conception and trying to help women to understand the sanctity of life, she never turned her back on them as they struggled.

Gianna was maternal toward those who were struggling personally with the issue. Once, a young woman asked Gianna to come to her home because of some “mysterious” hemorrhaging, which was actually the result of an attempted abortion. Gianna treated her compassionately, but firmly, urging her to seriously consider what she had done.

On another occasion, Gianna treated a young woman who had had an abortion. With particular kindness, Gianna offered the young woman some words on the sacredness of human life, which the patient listened to attentively. Gianna gently encouraged the woman to face the seriousness of her act and to realize that what she had done was not only an offense against her child, but also against God. Gianna invited her patient to be reconciled with the Lord, and she encouraged her to embrace God’s infinite mercy.

Or, again, there was one woman who, long after her other children had already grown, realized she was pregnant. She felt a kind of shame and discomfort in the presence of anyone she knew. Gianna’s love of nature in all its expressions helped to encourage this woman—and all her patients—to welcome the joy of motherhood, whatever its circumstances.

This especially speaks to me in light of Danielle Bean’s column yesterday at National Catholic Register: about a mother so sick with hyperemesis gravidarum and hypertension that she chose to abort her baby. What saddened me almost as much as the article itself and the situation of the poor woman was a comment by someone who condemned the woman’s selfishness:

This makes me physically ill.  She�s so selfish that she didn�t investigate other options, seek a second opinion, do SOMETHING to prevent unwanted pregnancies?  I pray she will know God�s mercy.

It isn�t selfishness, it�s desperation and despair. Read up about hyperemesis and understand the extremes of physical anguish this woman was in. Throwing up as many as forty times a day! This is not just feeling a little ill, it�s a life-threatening condition. Add in little to no medical support, doctors pressuring her to abort, and a woman who hasn�t been blessed with the gift of faith and the gift of an understanding of the preciousness of life, how could she have chosen otherwise?

Like Saint Gianna, we should have compassion for women in these situations, not condemn them. We have to remember that not everyone is lucky enough to grow up in an environment where they are taught that life is sacred. And we should thank God that his grace has allowed us to see so clearly when so many people are walking in darkness. There but for his grace go I!

I pray for Cheryl Harrison and all mothers who have struggled with this terrifying illness and given in to the pressure to abort that they will know God�s abundant mercy and love. I pray that women suffering from hyperemesis will find help before they are driven by desperation to turn their hands against helpless innocents.