Via Sarah at This Heavenly Life comes a fun meme that I just had to jump in on.

Here’s how the project works:

Write down the following, snap a picture (or scan the document), post it, and tag others.

The selection of questions is a little random. I suppose I could have mixed it up and done my own thing; but that’s kind of part of the charm. 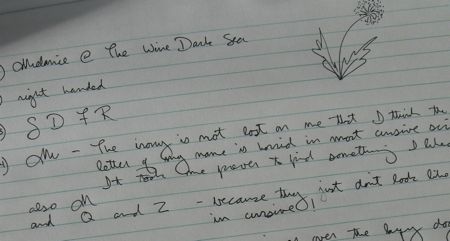 It’s ironic that capital M, which begins my name, is one of my most hated letters. I had to write it so often and yet I was never quite satisfied with the way it looked. It took me years to develop the initial flourish that I think is so much more appealing than the usual little flag at the top.

I also hate N for the same reason. And Q and Z annoy me because the cursive capitals just look wrong to me; but it also looks wrong to print them.

The song lyrics I wrote are Lorelei by The Pogues. It was the first thing that came to mind. I tend to agonize over things like that; but I decided to just go with it.

I’m tagging the first names of people I thought might actually participate that popped in my head as I was handwriting this: Kathryn the Bookworm, Betty Beguiles, Jennifer at Conversion Diary, Mrs. Darwin, Mary at evlogia, Jen Ambrose, Charlotte of Waltzing Matilda, and Jennifer at As Cozy As Spring; but I don’t really like tagging people because I hate anyone to feel left out so join in and leave a comment to let me know. I really would love to see everyone’s handwriting. That’s the one thing blogging lacks is that sense of personality that handwriting conveys. (Then again, it’s also legible!) 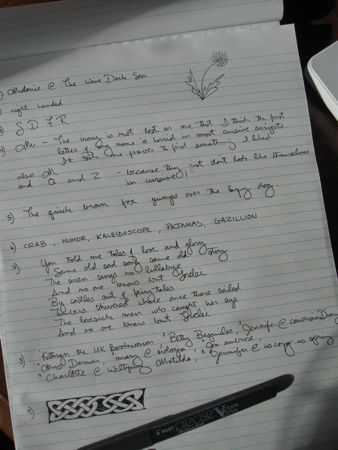 I’ve been thinking recently about how my girls almost never see me write. About the only time I set pen to paper is for my weekly shopping list. And that only because right now our printer is broken.

Before I was married I was a letter writer. I used to send long letters (sometimes ten pages or more) to friends and family. I used to be known for my ability to keep up with correspondence. Somehow I haven’t been able to find the time or energy since Bella was born. Wow, that’s been four years!

In fact, when it came time to pen this little exercise I had to hunt for a pen. Oh, there were plenty of ballpoints here and there and those are fine for grocery lists. But for writing I use only one or two kinds of pen. My favorite is shown down at the bottom of the second picture, a Pilot Precise rolling ball pen, V5, extra fine tip. Oh how I love this pen. I used to buy them by the box. Now I only have one left and that was hidden in a basket on my dresser and I almost despaired before I found it.