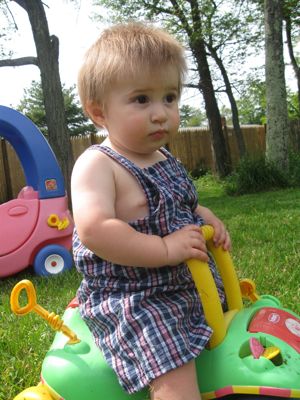 My plan did work. I woke at 5:30 this morning and got Ben out of bed, still asleep. He latched on easily and nursed in his sleep for a good 45 minutes before the girls got up and really woke him. When he did wake at around his usual time, he was in a very good mood, smiling and laughing and chattering at me.

At 8:30 or so I gave him some Tylenol and changed his diaper and played with him for a bit until he decided he was tired. I gave him his blankie and zipped him into his sleep sack, his usual nap cues. Then I banished the girls to their bedroom and we sat down and he actually did nurse to sleep!!!!!

He was very tentative about latching on and seemed to be even more relieved than I was when it went smoothly. I wonder if part of the problem hasn’t been that with the teething pain he’s been wanting to bite on stuff and I’ve yelped a few times as he’s nipped me. I didn’t think there was a connection because he had kept nursing after those incidents; but maybe he was a bit gun shy after all and the pain was making him want to bite so bad he didn’t trust himself or me.

We’ll see how his afternoon nap goes; but it looks like Ben’s back on track again.

Thanks again for all the advice and encouragement and prayers and sympathy. I’m hoping we’re over the hump and it’ll be smooth sailing now. At least as smooth as anything is when you have three wee small ones.