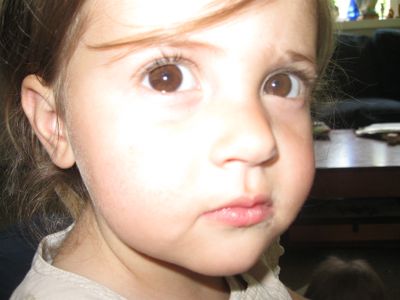 Finally the mystery is solved! We’ve been wondering for a long time now why Sophie (and Bella too) would say “ballerina” when she put something on her head: a book, a pillow, a basket. Later as her vocabulary grew a bit more sophisticated she would elaborate to, “Like a ballerina.”

Then the other day Dom was putting up the umbrella over the table in the backyard and Sophie exclaimed, “Like a ballerina!” We were both stumped. Why was she connecting ballerinas with umbrellas? Had she seen a book with a ballerina holding an umbrella?

And then soon after we were flipping through a book and she pointed to a picture of an umbrella: “Ballerina!” It clicked. She thought the word for umbrella was ballerina! To test my theory I pulled out another book with a picture of an umbrella, “What is this, Sophie?” I asked. “Ballerina,” she replied. Aha! I suppose the words do sound a little bit alike to a two year-old.